Punting into the New Season 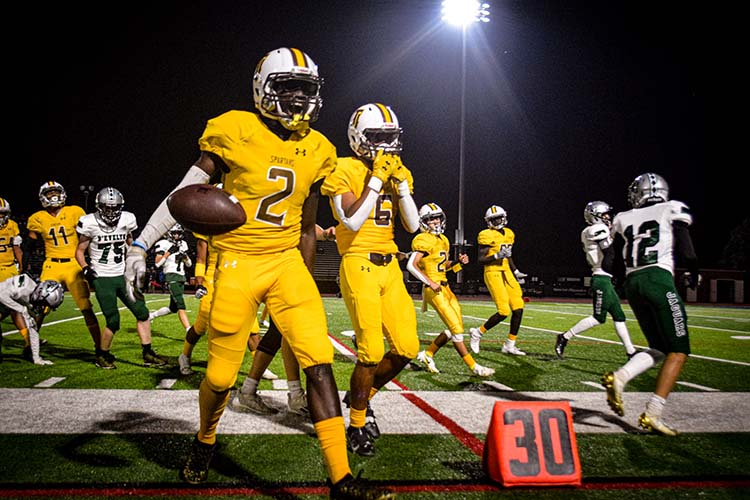 The Thomas Jefferson Spartans present their anticipated comeback to football fame during their homecoming game against D’Evelyn. photo courtesy of yearbook staff

Spartan football makes a comeback to defend their 2021 state championship title while defining their new team.

May 14th, 2021 presented a movie defining image, as students decked in yellow and brown swarmed the field after Thomas Jefferson High School football edged Gateway High School with a 28-27 win. Fast forward several months, and the Spartan community continues to support the boys in their ongoing season towards success. Athletic director Anne Rice recognized, “We have such great school pride in general even without a championship, but having that is kind of that added bonus of swagger that we can walk around with.”

As thrilling as the state championship was, there is a newfound thrill as every team began from scratch this season and TJ carries the added bonus of a target on their back as the team everyone wants to beat. Mike Griebel, TJ’s head football coach, shares that the spotlight the state champions earned was addressed to the team while expressing, “There’s no overconfidence by our players, they know that what happened last year was last year, and we have to re-earn that respect every season and that’s what we’re trying to do this year.” This attitude going into the new season could not carry the boys over the touchdown line one final time, as they lost their first game in an overtime win. Eagle Valley High School had an advantage as TJ’s coaching staff did not know anything about them, because there was no video tape, in addition to a new coach. Looking back, the loss was a blessing in disguise to rattle the boys into the Spartan mentality that staying focused is key to overcoming challenges. This worked, as they beat Sierra High School in the following game with a score of 41-8.

This first win of the season put the football team at ease with the realization that they are part of a championship program that continues to make strides even with setbacks. Rice explained, “Winning is always a goal, but it’s not my purpose. My purpose is to bridge athletics and academics, and make sure that kids are getting the most opportunities to participate, grow, and have a good experience in high school.” One of the team captains, senior Randy Yeboah, defines this very purpose as this is his last year on the team and it encourages him to be an example for the younger players to go out with a good legacy. Yeboah’s leadership position has allowed him to carry out these goals in a unique way. “I just use the energy I have, put it on the field. My craziness, or goofiness, whatever you want to call it, just encourages my teammates to give the same energy and then once that gets going, the team gets going, and then the energy is just so high, it’s crazy,” Yeboah remarked.

Hyping up the players is only one part of the puzzle towards the greater image of TJ football’s mentality. While the boys keep a positive attitude, Coach Griebel makes sure to ground them to the present and carry the perspective of, “Every week, we want to be 1-0. We don’t care about the season, we don’t care about 10 games, we care about this game, that’s it. Nothing else matters in the whole world in football than that. All our other goals, they go away right now.” This includes the looming title of state champions that may encourage the boys to draw comparisons to last year’s team, but that is not the objective of the current season. Griebel stated, “We don’t want to be last year’s team. This is our team, so we have a new identity, we have new leadership, we have new opponents, our schedule is different, and so all those things bring a whole different viewpoint to the season, because it’s just a different creature than it was last spring.” These differences contribute to a new season of boys ready to represent TJ in a new way; State Championships fall 2021, here the Spartans come.