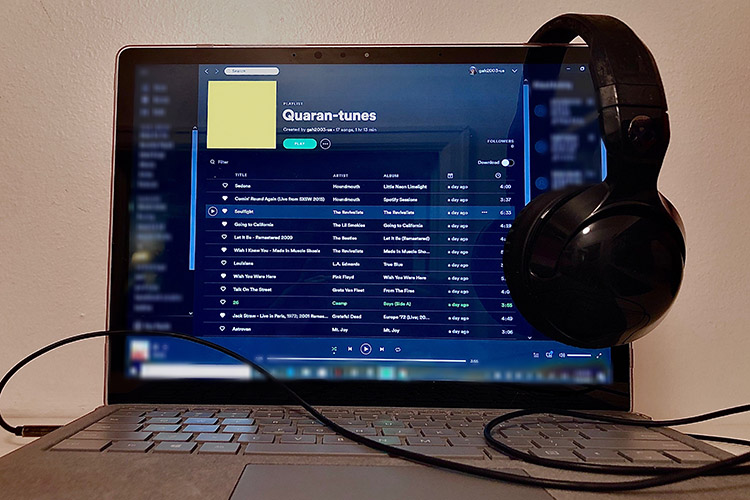 Check out these songs on any streaming platform. photo by Georgia Hartley

Seventeen songs I’ve had on repeat over the past eight weeks.

I love music. I have it playing when I’m driving, when I’m doing homework, cooking, exercising, etc. Basically, anytime I can have music playing, I do. I’ve been told I have an eclectic taste. I listen to music all across the board, spanning over the past six decades. Now that we are going on week eight of quarantining, maybe week seven, really could be week nine, I’ve had a lot more time to listen to music. In fact, I’ve been averaging about 5.5 hours of music a day, which is about 270 hours since we left school. That’s approximately 11.25 days worth of music. That’s a lot of music. I had time to listen to the songs I’ve always loved, plus some time to find new artists and songs. The songs below are the ones that I have had on repeat for the past couple of months and that are keeping me sane during this crazy time.

The only thing I have to say about this song is that you need to listen to it. Houndmouth is hands down my favorite band to ever exist. “Sedona” is their most streamed song, so it’s a great place to begin your journey into the world of Houndmouth. It starts off slow but picks up in the middle. The song is a little bluesy with heavy roots-rock. You’ll likely know the words and be singing along after a few listens.

“Comin’ Round Again” by Houndmouth

If you didn’t think Houndmouth was fantastic enough already, listen to Comin’ Round Again. If you have Spotify, listen to the live SXSW version, and if you don’t have Spotify, the recording version is still amazing.

You’ve probably heard of The Revivalists, a current rock band from New Orleans, but you probably haven’t heard of this song since it’s from their EP in 2008. This song is hands down one of the best songs I’ve ever heard. I can listen to it no matter what mood I’m in, and however many times I want to. I never get tired of it. I love this song so much I almost don’t want to share it with anyone, but it’s also way too good not to be shared.

“Going to California” by The Lil Smokies

I’m a huge fan of 70s rock, especially Led Zeppelin, and “Going to California” is one of my favorite Zeppelin songs, so when I heard this cover by The Lil Smokies, I fell in love. The song starts with some violin, which continues throughout the song, then proceeds through the entire song with the band’s unique taste. If you’ve ever heard “Going to California” by Led Zeppelin, you should definitely give this cover a shot.

“Let It Be” by The Beatles

I love The Beatles, I mean who doesn’t? And I especially love this song. “Let It Be” has a powerful message that is simply put, “there will be an answer, let it be.” As I’ve gone through life, this song has always served as a reminder that there is light in the dark. I think it is especially important to remember this during these uncertain times. Plus, the song is just beautiful.

“Wish I Knew You – Made in Muscle Shoals” by The Revivalists

And, we are back on The Revivalists because they are one of my favorite bands. If you’ve heard one song from these guys, it’s likely “Wish I Knew You.” If you like that, then search up “Wish I Knew You – Made In Muscle Shoals.” You will not be sorry. I won’t say much more but be ready for a slow, beautiful song, with lots of harmonies.

L.A. Edwards appeared on my radar in early March when he and his band opened up for Amanda Shires at the Bluebird. From the second he began to sing, I knew I would not be able to get enough of his music. If you like Tom Petty or Jackson Browne, you’ll likely enjoy this too. “Louisiana” is my favorite song by him at the moment, meaning I’ve heard it almost once a day for the past eight weeks.

“Wish You Were Here” by Pink Floyd

It’s Wish You Were Here by Pink Floyd, what more is there to say? It’s a great song and it’s aged flawlessly over the past 45 years.

“Talk On The Street” by Greta Van Fleet

As I mentioned before, I love 70s rock. I love the screaming voices, the shredding guitar solos, and the general legendary-ness of it. Sometimes I wish I was a teenager in the 70s, so I could experience what a real rock show was like. Then I found Greta Van Fleet. They formed in 2012 and are as close to an authentic 70s rock sound as it gets. I saw them at Red Rocks and had my mind blown. Many compare them to Led Zeppelin. Anyway, the band and the song rock (pun intended).

Caamp has never made a song I didn’t enjoy, but I especially enjoy this one. The song is happy and sweet. It fits perfectly into Caamp’s soulful, folky sound. I would highly recommend you give it a listen.

“Jack Straw” by The Grateful Dead

The Grateful Dead is not for everyone, but I happen to love them. My favorite Dead song of all time has to be “Jack Straw,” so I’ve had it on repeat for the past couple of months. This song still has the jam band aspects that make the Dead the Dead, but it has some really neat guitar and vocals. You can find about 20 live recordings of it on Spotify or Apple Music.

If you like indie music with a little bit of rock, you’ll probably love Mt. Joy. The band formed in 2016 and has since gained a couple millions devout listeners. “Astrovan” was the first single they released, which kickstarted their career. They just spent the beginning of 2020 opening up for The Lumineers.

“Drops of Jupiter” by Train

This song just makes me happy, which is very much needed right now. Train is wonderful and this song is wonderful. It’s crazy that this song is almost 20 years old, but it is just as good today as it was when it was released.

Rayland Baxter has a little bit of everything in his music and is definitely worth a listen. “Strange American Dream” has a cool sound and is just a starting place for all of Baxter’s music. It was released on his 2016 album Wide Awake.

“Little Lion Man” is just a great song that almost everyone knows. It’s fun, upbeat, and you can easily sing along to it. Plus, Mumford and Sons are just super cool in general.

“Social Cues” by Cage the Elephant

Cage the Elephant has to be my favorite alternative rock band of all time. They have albums full of great music. “Social Cues” is the title track off their newest album. After one listen, it is bound to be stuck in your head all day.

“Blame It On Me” by George Ezra

If you’ve heard any George Ezra song, it was probably “Budapest.” Don’t get me wrong, that is a great song, but it’s incredibly overplayed, especially when Ezra has multiple albums of music full of fantastic vocals and guitar. “Blame It On Me” is a great song from his debut album Wanted on Voyage.

You may not like all of these songs, but if you would like to check them out I would highly recommend it. No matter what, find the songs that will keep you sane during this crazy time, make a playlist, and put it on repeat.