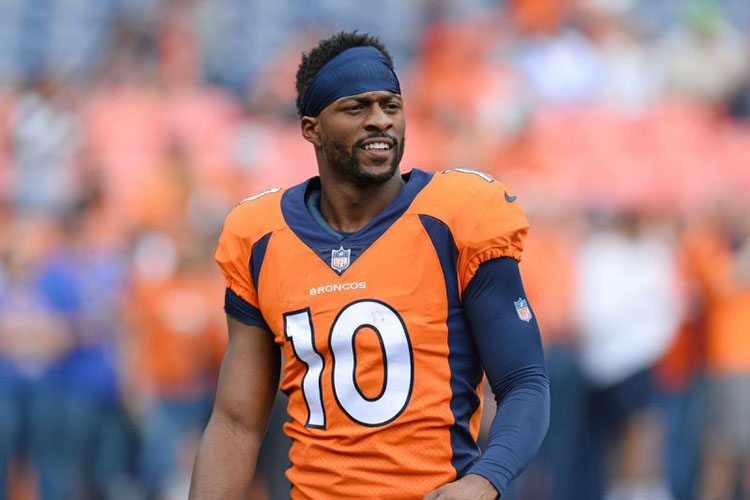 Emmanuel Sanders leaves Denver to receive a new opportunity after being traded to the San Francisco 49ers. photo from milehighsports.com

On October 22nd, 2019, the Broncos announced that wide receiver Emmanuel Sanders had been traded to the San Francisco 49ers in exchange for their third- and fourth-round draft picks next spring. Since the fall of 2014, Sanders has become a fan favorite not only for his plays on the field but also for what he has done for the Denver community. He has captured the hearts of many fans and has been a staple in the community of Denver. This unexpected trade left many fans upset about the idea of losing their favorite receiver.

In an Instagram post made shortly following the announcement, Sanders posted a thank you to Bronco fans, writing: “We’ve shared some special moments together that I will cherish for the rest of my life…the orange and blue will always have a special place in my heart.” Many of his teammates showed support for him. Derek Wolfe, defensive end, commented, “True grinder, gonna miss you brother.”

During his time as a Bronco, Sanders had 1,361 receiving yards and has scored 34 touchdowns. In 2016, Sanders contributed to the Super Bowl win against the Carolina Panthers with six receptions for a total of 83 receiving yards. Since 2013, he was apart of two Super Bowl and Pro Bowl appearances.

In his first game with San Francisco, Sanders received for a total of 367 yards and scored two touchdowns. His success was stopped short when Sanders sustained an injury to the ribs. After receiving a pass that was thrown too low, Sanders almost immediately grabbed the right-side of his rib cage. This forced him to leave the game against the Seattle Seahawks early. It has not been reported when he will return to active status.

Number 10 was not just a star on the field, but off it as well. During his time in Denver, Sanders started the Emmanuel Sanders Foundation, which works to provide financially disadvantaged kids in the Denver-area with the resources and support needed to accomplish their goals. According to the Emmanuel Sanders Foundation, the wide receiver wanted to provide kids with the same mentorship and leadership that he received as a child, so they can reach their full potential. To provide this, the foundation has started a community outreach program called Emmanuel’s Locker, which is a locker filled with sports equipment for students at Title I schools to use for after-school activities. In April of 2018, the first of Emmanuel’s Locker was unveiled at Kepner Beacon Middle School.

Sanders will be missed and will leave a lasting impact on Denver both on and off the field. What he has done for the Broncos and the community of Denver has made him unforgettable. Fans wish Sanders luck to his new opportunity and are excited to see what he will accomplish next.