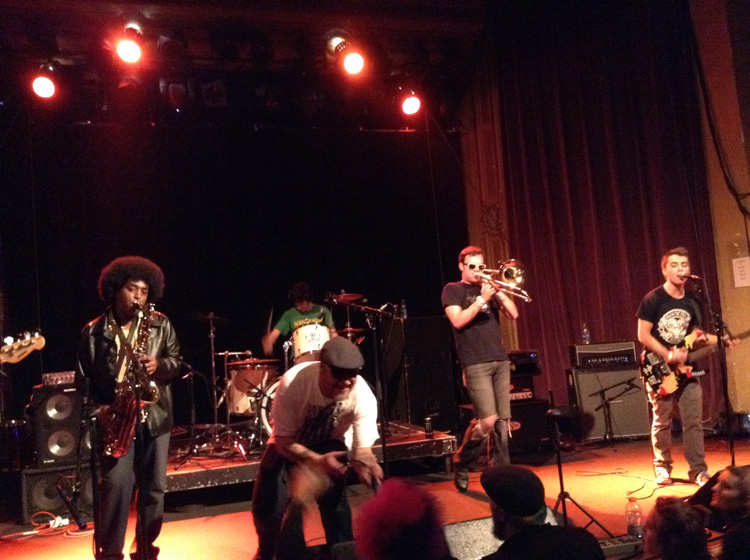 On January 30, 2016, several TJ students had the opportunity to play a sold-out show at the Bluebird Theatre with their band, the SB Rejects. SBR, composed of juniors Aidan Brown and Alex Morales and senior Jabril Jeylani, is a ska-punk band that has been able to tour around the nation playing their unique style of music.

SBR started their journey together about two years ago, as each of the members were all looking for new musical opportunities. “I joined SBR because it was a chance to play music with some new people and at the time, and it was a genre of music I didn’t know very well,” said Brown, SBR’s drummer. “It was an opportunity to get more in the punk scene and to meet new people and bands along the way too.”

SBR is distinctive due to their obscure genre of music. Ska-punk is a fusion of punk, jazz, and reggae sounds, which became popular in the late 1990s. Some well-known bands that create ska music include Sublime, No Doubt, The Mighty Mighty Bosstones, and Fishbone. “It’s unique that we are one of the few bands in Denver that still plays this kind of music,” explained Morales, the band’s guitarist and backup vocalist. “It is a very small sub-sect of music.”

The band has been fortunate enough to go on tour multiple times around the country. On these tours, the band typically plays for local venues and at house shows, and their network of friends and connections help them to find lodging during their stay. Their most recent tour, which started right after Christmas, included stops in New Mexico, Arizona, California, and Nevada, concluding in Colorado. In addition, the band has performed several benefit shows for programs like Reading Partners Colorado to make a positive difference throughout the state. “The best part of going on tour for me is the record shops,” said Brown. “Being able to see the music out there as well as seeing local bands’ records out of state is really awesome.”

SBR had the privilege of being the first Denver band to qualify for Illegal Pete’s Starving Artists Program, which was utilized at the new location in Tucson. The program, established between the restaurant and venue and their record label, Greater Than Collective, gives bands on tour a place to perform and eat while they are on the road. The Starving Artists program has assisted musicians in a variety of genres including Weezer, Morrissey, Elton John, and Frank Turner. “I thought it important that my band qualified for Illegal Pete’s Starving Artists Program, mainly due to the goodwill and support that such a program provides,” explained Jeylani, who plays saxophone for SBR. “Being a local band on tour, having others support you in any fashion is one of the most heart-warming things to have happen, and to have that program in place to support touring acts is extremely helpful and encouraging all-around.”

On January 30th, the Rejects had the opportunity to play a sold-out show along with Mustard Plug, Dan Potthast, and Sorry Sweetheart at the Bluebird Theatre. Many TJ students attended the show, and had nothing but rave reviews to give. “Their show was great, everyone played well, the crowd was interested and everyone had a great time,” said senior Jeffrey Josephs, a supporter and friend of SBR. “A lot of SBR’s local and repeat fans that are at most of their shows (like myself) were there and I saw scores of happy familiar faces.” Several teachers were in attendance as well to support the band and become exposed to new music. “They were well rehearsed and polished with every tune they played. Even though they are an edgier, harder sound, there are still wonderful melodies in all of their music,” said math teacher Dana Starbuck. “The band has a cool interaction with its audience and each other, encouraging dance and conversation with their fans. You can tell these guys love playing and working together.”

The SB Rejects have impacted the community and each other by creating a unique and vivacious experience for music lovers. “I’ve gotten to know so many unique people through my ties to my band, and the bonds I hold with my bandmates are some of the strongest in my life,” said Jeylani. “Being able to perform for others and to have them be affected by the music you make is something too precious to squander in my eyes.” Be sure to visit their Facebook page for upcoming shows, music samples, and posts about the band.