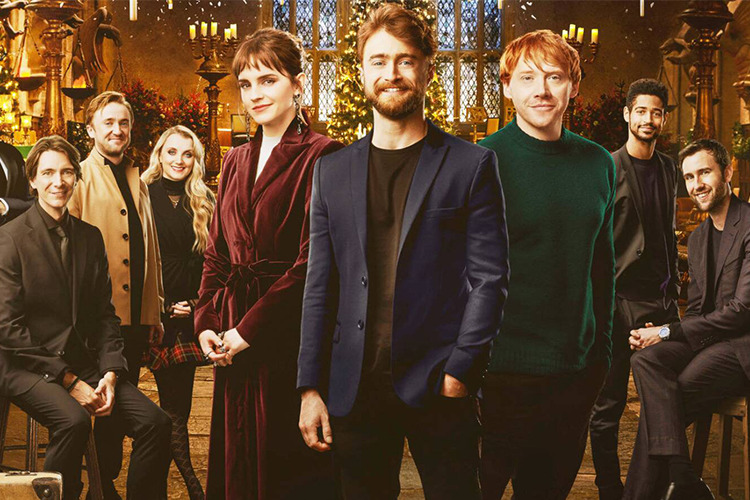 The cast of Harry Potter back together again to celebrate the 20th anniversary of the movie series. photo by HBO Max

The cast of Harry Potter reunited at Hogwarts to celebrate 20 years since the first movie premiered.

On New Year’s Day, many fans across the world, including myself, sat down to watch their favorite characters return to where it all began. The special started with everyone reuniting with their fellow cast members, some of whom had not seen each other since the last movie, Harry Potter and the Deathly Hallows. The viewers were able to see their favorite actors and actresses together again including Emma Watson who played Hermione Granger, Tom Felton who played Draco Malfoy, Rupert Grint who played Ron Weasley, and —of course— Daniel Radcliffe who played Harry Potter. This reunion featured many other notable characters as well, making it exciting to see everyone back together again.

The reunion show was well organized, as it went through fun facts and set secrets from behind the scenes one movie at a time. The first segment began with the first two movies in which the cast discussed their fondest memories from when they were younger and what it was like making what is now considered classical movies at such a young age. During this section, the director and producer conversed about the casting process and the pressure they were under to find the perfect people to play the main characters. It was very interesting to learn about the process of casting the children as well as the difficult hunt that was finding the perfect Harry Potter.

The feature then moved on to discuss the third and fourth movies and the changes that came with them. These movies were a turning point, not only for the characters but for the actors as well. The events that occured in these two films, specifically at the end of the fourth movie, mark when the story line begins to take a darker turn. In the films these characters had to become more mature, making it interesting to see how the actors and actresses related to the story in real life, which made this reunion show so special. Fun facts and stories from behind the scenes were also talked about during the section that covered the fifth and sixth movies, which is when the story line begins to connect throughout all of the movies. Finally, the last section focused on the production aspect of the last two movies as well as wrapping up the special.

Throughout the reunion, the cast talked about the behind the scenes of every movie as well as the role special effects played in creating the final masterpiece, which was something I really enjoyed watching. It took a lot of time and effort to capture the surrealism of the Harry Potter universe, making special effects one of the most talked about topics in the reunion. The show also included a tribute to all of the special actors and actresses who have passed away since the last film, Harry Potter and the Deathly Hallows: Alan Rickman who played Professor Snape, Richard Griffiths who played Vernon Dursley, John Hurt who played Garrick Ollivander, and many other actors and actresses who also had an impact on the films.

Overall, I was very excited to watch the characters reunite, and this feature did not disappoint. This reunion show was a great way to celebrate the 20th anniversary of this special series. Thanks to HBO Max and all of the amazing people who contributed to the movies, fans across the world got the chance to spend their New Year’s Day reliving the magic of the Harry Potter universe.