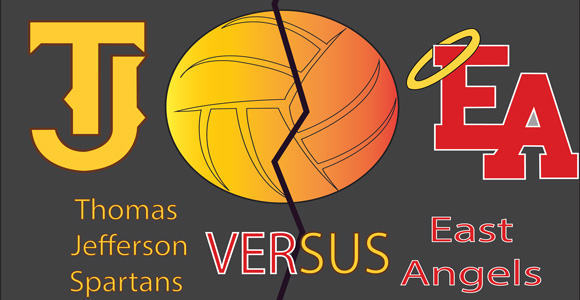 The Spartans gear up for a critical game, hoping for another run at state.

As the Thomas Jefferson Spartan Volleyball team attempts to make a run into the playoffs, their toughest challenge remains: the upcoming match with the East High School Angels. The rivalry between TJ and East has been going on for over 50 years, and each year it generates fierce competition on and off the court. As the Spartans prepare for this obstacle both physically and mentally, so do their opponents across town.

So far this year the Spartans have had a tremendous season, with their record standing at 13-3. Head Coach Erik Rhee and his Spartans have one more challenge; on Wednesday, October 21st, the team will be playing the Angels as one of the crossovers this season. A crossover is a match where top ranked schools cross over into a different division to play that division. On this day, both the Spartans and Angels will be motivated to dominate.

Following last year’s heartbreaking loss, sophomore Junior Varsity player Lucy Peterson commented, “Last year we lost to East in a hard fought game; unfortunately we weren’t able to pull off a win. Winning this year would mean a lot for the program, not only for the teams and coaching staff, but our school as well.”

Leading up to this game, the players are excited and ready to take the court. The Freshmen and Sophomore teams will play at 4:00 p.m., Junior Varsity will play at 5:30 p.m. and Varsity at 6:30 p.m., at East High school. Varsity player Jordan Pounds explained, “We want to play well, play our hearts out, play as best as we can, this win would really help us out.” This game will be the biggest and most important game of the year as the rivalry continues.