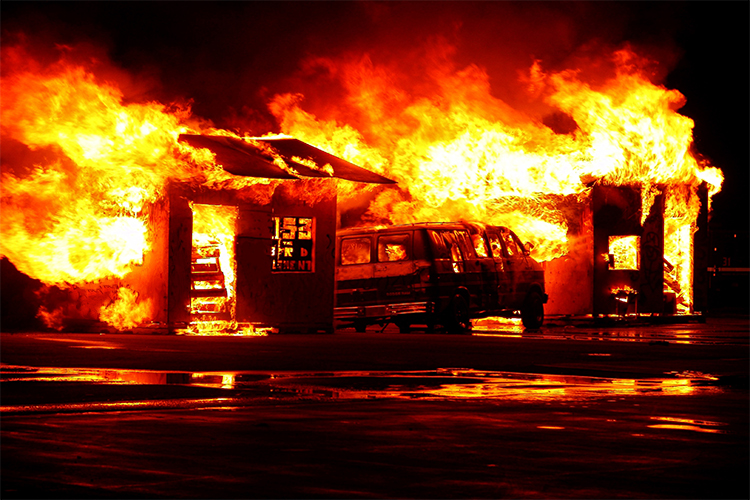 In total, the Great Chicago Fire is estimated to have created $200 million dollars in damage. photo courtesy of storyblocks.com

148 years ago, at nine o’clock at night, a flame sparked from a fallen lantern in a small barn. It caused as many as 300 deaths, destroyed 2,000 acres of land, and cost the city $222 million in property damage.

The summer of 1871 was hot, dry, and long for Chicago, with the city only receiving a total of one inch of rain between the beginning of July through October. With only six years having passed since the end of the Civil War, America’s midwest was cloaked in severe drought conditions. Though October 8th is infamous for the day the Great Chicago Fire began, two other massive fires broke out in Wisconsin and Michigan as well. The birthplace of the conflagration, however, is whispered to have started on the O’Leary property.

Rumors have speculated that a cow, or a group of gambling men, knocked over a lantern, but the exact origin remains unknown. As wood was still being prominently used for roofing and sidewalks, it became an untimely, unfortunate coincidence. Perfect, hot conditions and a beautiful combination of wood shingles made it almost effortless for the fire to escalate. Chicago’s fire department at the time only possessed 17 horse-drawn steam engines and 185 firefighters to protect the entire city. The fire might have stood a better chance of being fought, had the watchman not directed the firefighters to the wrong place. Not only that, but a warning of the danger had been sent to the courthouse but remained unchecked, as the firefighters found themselves too weary from fighting an average of two fires a day. The force was extremely understaffed as well. In total, all the small, seemingly unimportant factors allowed the flame to slip through and engulf the entire neighborhood.

People hoped that the fire would be stopped by a small branch of the Chicago River, but bordering the water were lumber yards, warehouses, and coal yards. The winds grew stronger during this time, causing burning debris to fly across and catch structures on the other side. Only one water station stood to serve the entire population of Chicago, making the task increasingly difficult. For an entire two days, the city burned.  As a result, one in three Chicago residents found themselves homeless (roughly 100,000 people in total). At the time, the city’s population measured roughly 324,00, implying that a third of people living in Chicago were without a home. 120 bodies were discovered, 3.3 miles of land were burned, and 17,500 buildings were incinerated. In combination with the losses from the Michigan and Wisconsin fire (also known as the Peshtigo fire), an estimated 2,600 people are thought to have perished on the 8th of October. At 2:30 am on the 9th, the cupola of the courthouse collapsed, causing the great bell to fall and emit such a loud, bellowing sound, that it was reported being heard from up to a mile away. The Palmer House hotel burned to the ground thirteen days after its grand opening. The day after the fire, it rained.

The devastation was horrendous, and it drew in thousands of dollars of donations from sympathetic cities all around the globe. Places such as New York City gave $450,000, St. Louis donated $300,000, and London sent 1,000 guineas (now equal to $327,000). Other smaller towns sent clothes and food, while Milwaukee mailed Chicago fire-fighting equipment. With so much disarray and confusion, looting and lawlessness took a sharp rise, and Chicago had to be placed under Martial Law for several weeks. Almost immediately after the tragedy, the city rewrote its fire standards.

The Great Fire of Chicago was a devastating tragedy which loses acknowledgement with every year that passes. On October 8th in Chicago, Illinois, an estimated 300 people lost their lives, and 324,000 lost their homes. Memorials can still be found all over the city, with one being in the Chicago Fire Academy, which sits upon the former land of the O’Leary family. A small square of flooring is sectioned off and serves as a marker for the exact spot where the fire began. The former hardware store during the event had melted when consumed by flames. Since it contained an abundant amount of metal and iron, all the tools fused together, leaving nothing left but a giant blob of heavy metal. It was moved behind the Chicago History Museum, and appears almost invisible in the seemingly normal background of the city. St. James Cathedral still bears scorch marks atop the bell tower as well. If one looks closely enough upon the streets of Chicago, small markers still remain that serve as a reminder for what occurred so long ago.