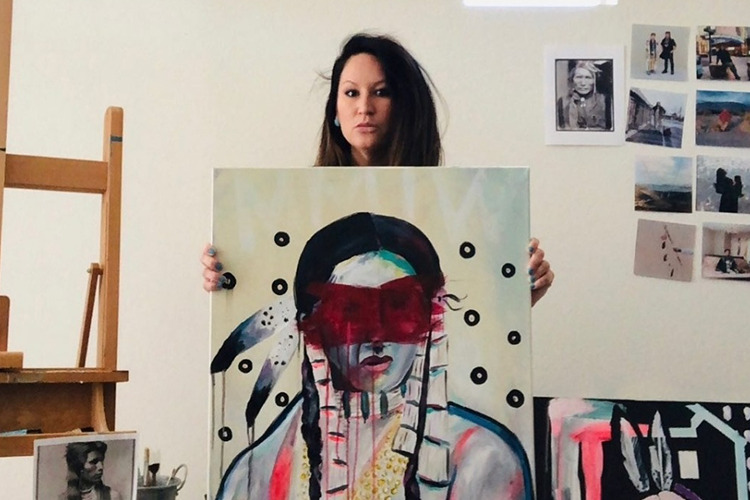 An Indigenous woman creates art and murals in order to spread awareness of Missing and Murdered Indigenous Women, she has multiple art exhibits around Colorado, specifically for this cause. photo by Danielle Seewalker Instagram: @seewalker_art

For centuries, Indigenous women have been neglected and isolated but the struggles that women from Indigenous communities endure should be recognized.

Throughout history, one cannot read an article about missing and murdered Indigenous women without reading about a white woman who went missing too. It seems as though everyone finds it easy to talk about the white woman that went missing and got murdered. Somehow, it is difficult for people to discuss the Indigenous women who are tormented on a daily basis. Disagreements can be brought forth, but how much merit do those arguments have when often the only people recognized are white? How much strength do these arguments have when law enforcement and media portray a one-sided issue?

Out of the 5,712 cases of missing Native American women and girls reported in the United States, the U.S Department of Justice’s missing person database has only reported 116 cases from 2016 until now. For Indigenous communities, this adds one more layer of trauma upon existing wounds that media and law enforcement refuse to help heal. When a case does get coverage, it is filled with bias and stereotypes that only decrease the help being given to victims and those that are family to victims. Indigenous victims and other victims of color should receive the same level of coverage and help as white victims. They all deserve justice despite race or culture, especially amongst Indigenous communities where murder is the third leading cause of death.  Four out of five Indigenous women have experienced racially motivated violence. Similarly, more than half of Indigenous women experience some sort of sexual violence.

Due to this influx of violence towards Indigenous women, a movement has been born. The Missing and Murdered Indigenous Women (MMIW) movement is a symbol of strength and togetherness throughout indigneous populations. People supporting this movement wear the color red in order to connect to Indigenous ancestors. Red in most Native American tribes is considered to be the only color that spirits can see. The hope is that by wearing red they can call back the spirits of their women and children to lay them to rest, therefore bringing them to justice. A red hand painted over the mouth in the images of this movement represent the silence of the media and law enforcement. It stands to show the silenced voices of the communities suffering.

“It shouldn’t just be blonde hair, blue eyes for you to count, we leave our homes with a target on our backs,” said Kota Shippentower. Shippentower is very involved and active in the movement. She helps to organize a lot of the protests, especially those pertaining to NoDAPL and MMIW. Shippentower then refers to the Disney movie Pocahontas, “She was one of the first missing Indigenous women.”

The silence portrayed in this original story refers to the beginnings of missing and murdered Indigenous women. “Media platforms have no right to be silent about such a big issue, it feels wrong for us to sit back while nothing is being done for Indigenous Women. I feel like they deserve just as much justice as everyone else,” said Asher Frost, a sophomore at Thomas Jefferson High School in response to media silence. Asher continued, “We need a new system, the system by which we live is far too generalized to one race and one culture.”

Many Indigenous communities are starting to bring up the connection between the manufacturing of oil pipelines and sexual violence within tribes. Indigenous communities named the cause in this rise of sexual assault as “man camps.” These camps are for construction workers that are building these pipelines. Reports connect these “man camps” to higher rates of sexual assault, violence, and trafficking within Indigenous tribes in those areas. “Just this February, pipeline workers associated with the development of Line 3 were arrested for sex trafficking. Multiple “man camps” loom over a stretch of road dotted with cases of missing Indigenous women.” This highway stretch has been named the “Highway of Tears,” reports from the Virginia Sexual and domestic violence alliance say.

Further, Shana Saint Phard, a junior at Thomas Jefferson High School, inserted her opinion, “That same level of protection is not provided for women of color, let alone male people of color who are actually targeted by law enforcement.” Recognizing that this is a problem, a lot of people from Indigenous communities are stepping out of their comfort zone and responding to the issue.