Residing in a New Role 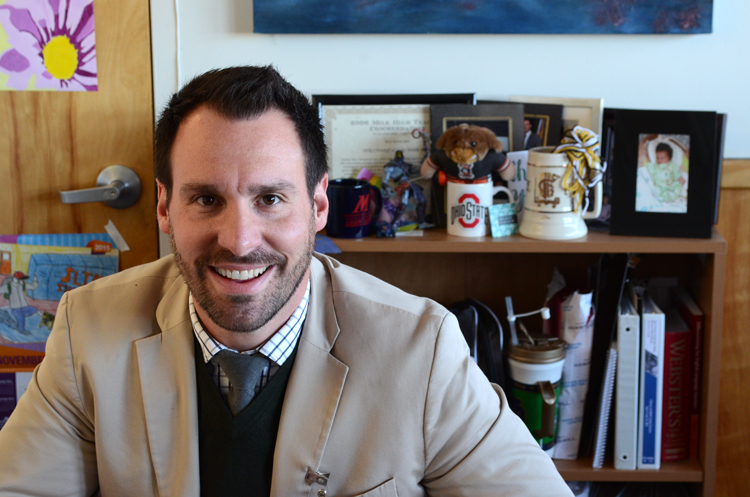 Assistant Principal takes on a new role for the 2015-2016 school year.

When Mike Christoff entered the field of education, he never imagined that he might someday become an administrator. After five years of being an Assistant Principal at TJ, this year Christoff is taking on the role of principal resident though DPS Learn 2 Lead in order to learn what it is like to be a sole leader.

“Last year, I was asked to be in this new group of assistant principals called AP Aspire,” said Christoff. “It’s made up of different assistant principals who were identified throughout Denver as showing promise to be a principal.” In the role of principal resident, Christoff will be working closely with the other administrators at TJ and lending support to them with their own roles. This includes assisting with athletics, discipline, instructional observations, and supporting students and families. “Before, my job was more focused in doing discipline, concurrent enrollment, and ACT readiness, whereas now it’s a little more general,” he explained.

For two weeks at the start of second semester, Christoff will serve as the acting principal. While he will consult with current principal Suzanne Morris- Sherer when needed, Christoff will be taking the role into his own hands. During this period, Christoff will be doing both his current job and that of the principal, which he anticipates will be “a lot of work.” Christoff stated that the biggest challenge for him will be balancing his time between being at home and being at TJ, but he is looking forward to working with teachers and other staff members to plan out the semester. “He is ready to be a principal and I feel that he is ready for this next step in his career,” said Morris-Sherer. “I have the utmost confidence in Christoff.”

Christoff has been working in Denver Public Schools for the past sixteen years. He has been a teacher, athletics coach, and an assistant principal. This new experience has given Christoff a broader viewpoint and allows him to work with staff members on a deeper level. English teacher Jason Sheehan, who previously worked with Christoff at Morey Middle School, stated that Christoff’s experiences in multiple facets of education give him many strengths suitable to eventually become a principal. “He had a lot of years teaching, he has been a coach for teachers, and he has been an assistant principal,” said Sheehan. “Because he’s had experience in all of those aspects of being part of a school, that’s going to strengthen his ability to be the sole leader.”

The rest of the administrative team has been very supportive of Christoff during his time as principal resident. Christoff stated that they have been “great supports” and have helped him to manage the challenges of his new position. Assistant Principal Paula Hammel said that Christoff has been a valuable administrator, teaching her how to communicate with parents and students in an effective way. “I think that Christoff does a great job in relating to students and parents by being very personable. He has great knowledge of the job and the duties that it will take to be a principal. I think he’ll be fabulous,” said Hammel.

While being an administrator comes with challenges, Christoff enjoys and appreciates all of the bumps along the way. “I like the job a lot. I like the challenges that it poses and I like that it’s different and that it makes you think every day,” said Christoff. “It’s not routine. Even when you try and make it routine, it’s never a routine day.”