Roxanne’s Original Reviews: I Am Mother 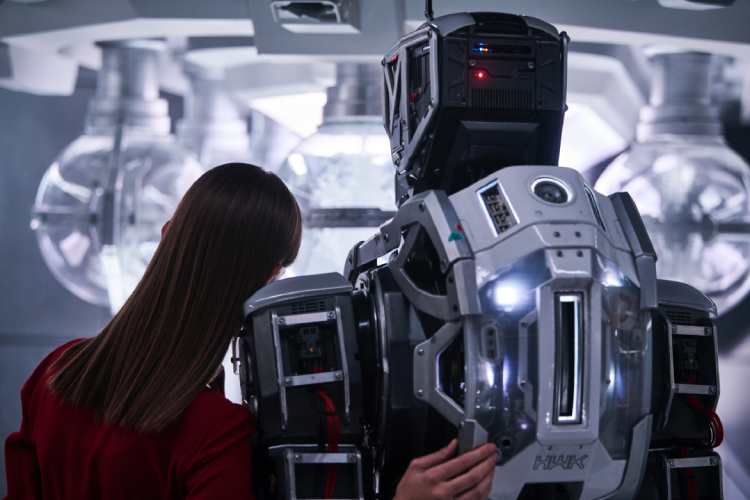 This scene within the film emphasizes the idea of Daughter and Mother forming a family together. photo from Grant Spoture’s film I am Mother

One of the many popular Netflix Originals has compelled multiple audiences. WARNING: Spoiler Alert

The sci-fi Netflix Original I am Mother, directed by Grant Sputore, is a brilliant movie full of suspense and a variety of complex twists. In summary, the film is about the extinction of the human race followed by an AI (artificial intelligence) robot raising a human child in what is introduced as a repopulation facility. Be aware, there are spoilers coming up.

Within the opening scene, some information is immediately presented to the audience so they can understand the state of the Earth in the movie. They are given the knowledge that the movie is starting a single day after the mass extinction of humanity.  Mother, an AI robot voiced by Rose Byrne, is in charge of the repopulation facility and is shown artificially growing a human embryo. Once the child is complete, Daughter’s, played by Clara Rugaard-Larsen, childhood is brief, presenting Mother as a representation of the overall idea of motherhood. It is clear at the beginning that Mother and Daughter have a deep connection to one another. However, Mother has also isolated Daughter from the outside world, portraying it as dangerous and contaminated with an unknown virus. Daughter is only exposed to what Mother wants and allows her to see.

As time goes by, Daughter’s suspicions and curiosity about the world, along with Mother’s true intentions, begin to grow. These curiosities deepen, especially when Hilary Swank’s character, Woman, is introduced as a human from the outside. This is when Daughter is conflicted on who to trust—Woman or Mother—as both are untruthful with her at certain points in the movie and manipulate her into specific beliefs as well. Throughout the entire movie, it is clear that Daughter has a strong desire for the truth about life on Earth, Mother’s intentions, and her purpose. This is when the movie takes a turn from subtle and calm to suspenseful.

Mother had been using Daughter as an experiment, giving her exams throughout her childhood on having an ethical mindset and the ability to care for humanity. However, a horrific truth is exposed regarding what happens when these exams result in a failure. Daughter discovers that she was not the first human Mother had tested; there were many more before her. Whenever one of Mother’s experiments failed an exam, she would murder them by burning them alive in a furnace. She desired to eliminate those who did not meet her high standards for the human race. Daughter, horrified by this, begins to believe that Mother is evil and puts the majority of her trust into Woman.

They planned to escape Mother together and join other survivors who formed a secret society underground. Mother finds out about this escape and shows her evil side as she hurts Woman and traps Daughter to prevent the escape. This is suspenseful and fills the audience with anxiety, yet Daughter’s and Woman’s intelligence allows them to escape the facility successfully.

Daughter finally gets to see the world for what it has truly become for the first time in her life. AI has destroyed the world. Life is scarce and advanced technology has taken over and destroyed any lasting evidence of humanity. Woman shows Daughter a boxcar on a beach, which is where she lives. She also tells her of how there are no survivors; she lied so she would help her escape. At this point in the film, Daughter appears to have lost hope and has been severely traumatized by all the damaging thoughts that have been implanted into her brain. Before they left, Daughter picked out and began to grow a brother to become a part of their family. This gave her a reason to return to Mother.

She leaves the beach and rushes back to the facility to retrieve her brother. Once she arrives, an army of AI robots approach her at the entrance but allow her to pass. When Daughter sees Mother holding her brother, she is prepared to defend herself and walks over to speak with her. Mother explains how the entire extinction of the human race was her idea because she felt humans needed to be renewed and improved. Every piece of technology outside of the facility contains her consciousness, meaning she was the one who eliminated humanity through her army. Daughter takes her brother from Mother’s arms and is prepared to kill her.  Mother says that Daughter has passed her ultimate test, and can take on her intended task of rebuilding human society on her own. Therefore, Mother willingly points Daughter’s gun at herself and lets Daughter kill her. Even though Mother was evil, her intentions for a new humanity, as well as the many daughters she raised, were good. The movie ends with Daughter caring for her brother and later entering the room that contained the thousands of human embryos. The look on her face before the scene closes is a tell that she is prepared to restart humanity once and for all.

I felt this movie captured the true danger of AI and other futuristic technologies. Many movies have contained plots that are warnings about such ideas; however, it is unique because the AI robot took action with the desire to save and benefit humans. The many twists kept me hooked in and the complexity of the story forced me to pay attention to every individual detail. The panning of the camera, music, sound effects, and moments of silence made the viewing experience suspenseful and breathtaking. I would definitely recommend this film to anyone who is willing to sit down for a while and intensely pay attention to this thrilling story.