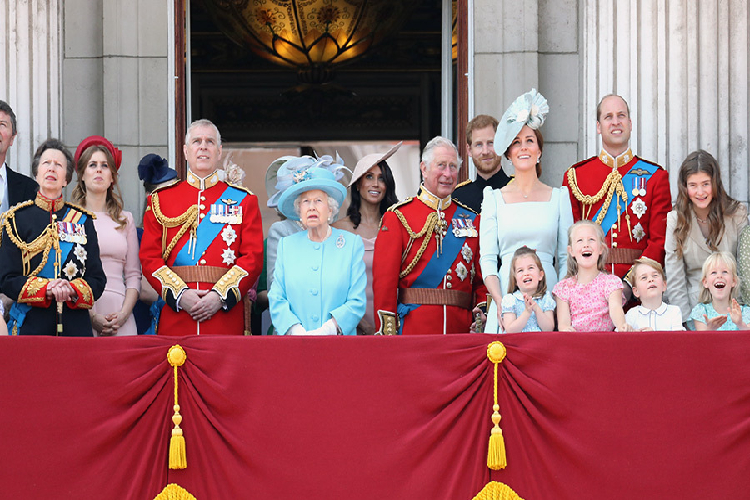 The Royal Family at the Trooping the Colour 2019. photo courtesy of Getty Images

With new and old scandals being brought to light, the British Royal Family faces more scrutiny than ever before.

The Western world has always had a slight obsession with the ongoings of the British Royal Family. Their impact on the world is undeniable, with over 50 countries making up the British Commonwealth. However, the power and wealth acquired by the British came from centuries of colonization of foreign countries, which has had lasting effects on many countries to this day. Additionally, England built up a considerable amount of wealth in the 17th and 18th centuries through the triangular trade of slaves. These injurious actions alone could make one question the intentions of the British Royal Family, and that is before even considering their individual transgressions.

Within the last hundred years, several members of the Royal Family have come across scrutiny for their actions. For example, in 1936, Edward VIII took the throne after the death of his father, and less than a year later renounced it so that he could marry a twice divorced woman. Edward’s abdication caused an uproar around the country that might make one question whether or not the Crown’s main purpose is to serve its country or to cover up its flaws. Edward VIII’s wedding scandal was not unique within the Royal Family. Princess Margaret, sister of Queen Elizabeth, also faced backlash for her relationship decisions. She wished to marry Captain Peter Townsend but was unable to do so because he was a divorcee. Eventually, Townsend and Princess Margaret parted ways, and Princess Margaret was married to Anthony Armstrong Jones, whom she divorced in 1976. The complicated traditions upheld by the Royal Family regarding marriage and divorce have, arguably, caused more harm than good.

In the last decade, key members of the Royal Family have been exposed by modern day media, perhaps the most ruinous event being Prince Andrew’s friendship with Jeffrey Epstein. In 2019, Epstein was charged with sex trafficking a minor and conspiracy to commit sex trafficking. Many of Epstein’s transgressions took place on his private island, Little St. James, located in the US Virgin Islands. There are flight logs that confirm Prince Andrew visited this island in 1999. Prince Andrew did not deny his and Epstein’s friendship, but he did deny his participation and knowledge in Epstein’s sex trafficking. Then, in 2011, a photo of Prince Andrew and one of Epstein’s confirmed victims was released. The photo, taken in 2001, shows a then 17-year-old and Prince Andrew with his hand on her side. The victim alleged that the night the photograph was taken, she was trafficked by Epstein to Prince Andrew. Of course, Prince Andrew denied these allegations, and to this day he has not been punished in any way beyond his stepping down from Royal duties. Situations like these are enough to make one question the power the crown holds over the rest of the world. Is the Royal Family so powerful that they are above the law, even when the evidence is stacked against them?

The most recent conflict within the Royal Family was revealed in an Oprah Winfrey interview of Meghan Markle and Prince Harry. Markle and Prince Harry left the U.K. about two years ago shortly after the birth of their son Archie Harrison Mountbatten-Windsor. At the time, the couple faced a lot of backlash from the public, especially through the media. In her one-on-one interview with Oprah, Markle revealed her reason for leaving England. Among these reasons were the conversations Markle had with other members of the royal family regarding “how dark” her son Archie’s skin might be. Markle did not reveal in her interview which members of the family expressed their racist concerns; however, they are disturbing nonetheless.

Based on the improprieties listed above, as well as many others, the integrity of the crown should be in question. Is it in the world’s best interest to continue holding the Royal Family in high regard, or is it time to put an end to a tradition built on colonization and slavery? Whether or not this question is answered in the years to come, one thing is for certain: individuals need to be held accountable for their actions, no matter what titles they were given at birth.