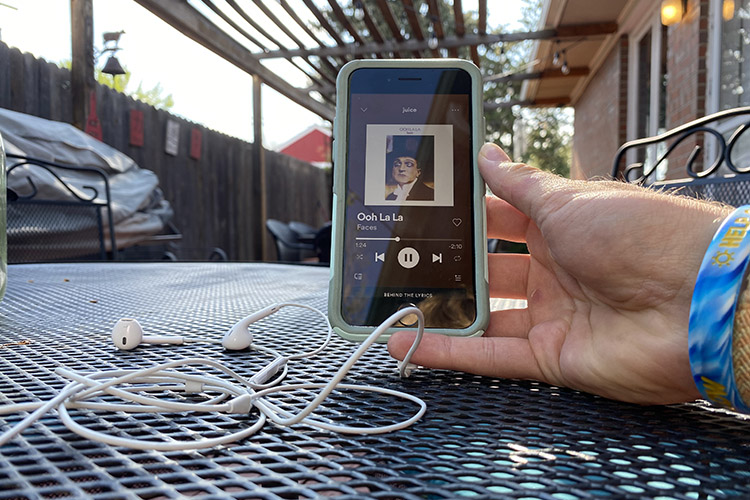 Listening to your favorite tunes outside is a therapeutic way to enjoy the near summer weather. photo by Ryan Moe

With some extra time on my hands, I’ve spent a lot of it listening to both new and old music.

2020; What. A. Year.  With a near World War 3, a global pandemic, and now giant killer bees, this year has been full of unfortunate surprises. Many artists have put their albums on hold due to COVID-19 such as Alicia Keys and Lady Gaga. Although the pandemic has delayed many albums, many artists are taking a different approach and releasing singles and albums to give us quarantined citizens a way to pass the time. As an avid music listener, these new releases, as well as old songs I’ve revisited, have kept me busy during these times.

Mr. #1 himself drizzy Drake released a mixtape on the first of May titled Dark Lane Demo Tapes, that showcased his hit single “Toosie Slide” and a previously leaked song “Pain 1993.” With a feature from Playboi Carti on Pain 1993 this track was very highly anticipated, but was certainly a letdown.  Drake did his thing and floated on the soft beat with a nice flow, but Carti completely botched his verse and soiled the song.  Although this verse is extremely poor and disappointing to many Carti lovers, many fans are letting this verse take away from the entire tape itself.  With an awesome intro, a good balance of slow and hype songs, and excellent features including the likes of Future, Young Thug, and Chris Brown, Drake certainly didn’t disappoint.  Despite having a few low points throughout the mixtape, overall it is very solid and worth a listen.

Mt. Joy, an indie rock band based out of Los Angeles, released a collection of singles that will be featured on their second studio album.  Out of the seven singles that they released, some of my favorites are: “Let Loose,”“Strangers,” and “Rearrange Us.”  The band is a five piece group that consists of soft guitars, drums, and a piano.  With a similar sound to The Lumineers, Mt. Joy is an up and coming band that has the talent and chemistry to become a household name.  So if you’re interested in this type of music or even if you aren’t, I encourage all to give this band a listen and their new singles are a great place to start.

“You Can’t Always Get What You Want” – The Rolling Stones

This is my favorite song from possibly my favorite band.  Anyone who hasn’t heard it can not consider themselves part of society until they do. It is a seven minute masterpiece that entails everything that makes this band so great. Mick Jagger’s vocals, the awesome acoustic and electric guitar riffs, and even an appearance from the London Bach Choir to open the track, make this song perfect.  What brought me back to this song as of late, is that the title rings true now more than ever.  With this global pandemic occurring everyone is having to make sacrifices and miss out on things they love, but the lyrics remind us if you keep moving forward sometimes “you get what you need.”

Wiley from Atlanta is a name that not many know but should.  He is a talented rapper and vocalist who is nothing but authentic. This song specifically I can not stop listening to. Wiley dives into his personal life and struggles over an atmospheric beat that reminds me of a late summer night. Any student at TJ looking for a song to blast in their car on the way home this summer, this is the one.

This is my ultimate quarantine song.  I have it on repeat not only because of its beautiful acoustic guitar and undeniable rhythm, but mostly because of its inspiring lyrics. Throughout the song the lyrics: “I wish that I knew what I know now when I was younger” are frequently repeated.  This reminds me that part of life is making mistakes and learning from them. People can try to give you advice and tell you how to live based on mistakes they’ve made, but the only way you grow is to experience these mistakes firsthand and learn from them to better yourself.

I hope everyone in our TJ community is staying safe and figuring out ways to stay busy and productive during these times. Whether it’s music, reading a book, watching a show with family, or anything your heart desires, just stay busy and treat your mind and body right. Also, if you have the time check out these collections of songs I promise they won’t disappoint.