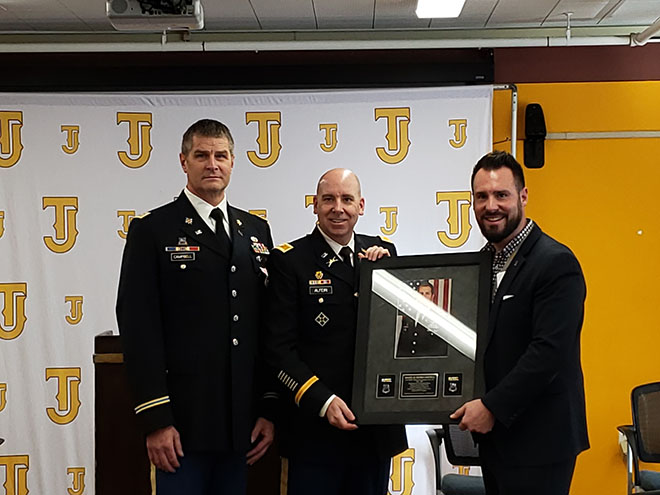 On November 8th, one of TJ’s very own Spartans received a prestigious award.

Thomas Jefferson’s own Major Dennis Campbell received the Senior Army Instructor (SAI) Award of the year, a worldwide honor. Campbell was delivered his award by the 5th Brigade Commander Colonel Chris Alferi, and 5th Brigade Command Sergeant Major George Bunn. Both men traveled from Texas to deliver such an award to one of TJ’s Junior Reserve Officer Training Corps instructors.

Various tasks took place to prepare for the event, including setting up Campbell’s desk in yellow decorations, setting up room 111 for the ceremony, and getting the camera crew together to get footage and shots of the event.  Senior Marlene Romero, Commander of TJ’s Honor Platoon Step Team, explained, “It was an unusual morning. We came in earlier than we usually do and it was hectic getting everything together. It was one thing after another. If someone forgot something, we had to get that item. I just wanted it to be perfect for Major and I wanted him not to worry about us and to have the day be about him.”

Senior Brigade Cadet Major Stephane Sizov described “Brigade was presenting a brief for the Command Sergeant Major and Colonel. I knew what to do for that, but when I arrived at TJ everything left my brain. When I walked into room 111, I was shocked to see everyone at attention.”  Brigade had an extremely important part to play in the event since they were in charge of presenting Colonel Chris Alferi and Command Sergeant Major George Bunn to Principal Mike Christoff.

Christoff expressed, “I didn’t know much about the award at first, but after learning more about it from Colonel Steve Osterholzer, (head of the JROTC program for the district), I was very impressed. I know Major Campbell does a lot for the school, but all the other things he’s done in his career have been really impressive, with all the work he’s done at Lincoln and then all the work he’s been doing here at TJ. I was very proud of him and proud for him. I know he appreciated the kids being there and the staff members that were able to be there. He deserves it and he’s an awesome guy. He’s great to have on the staff and he definitely is well-deserving of the award.” Christoff’s favorite moment from that day was when Campbell expressed how he felt about the cadets. To Christoff, this meant a lot, especially when he saw Campbell mentoring the cadets.

Of course, Campbell had some words to say as well about this rare award. “I was fairly surprised to have received the Senior Army Award. I think we’ve only had one other individual get the award over the years and that was the Non-Commissioned Officer (NCO) Award.” explained Campbell.

The festivities positively affected everyone who attended, and Campbell had an extraordinary time. From laughs to choked up words of acknowledgment, the morning was spectacular. “I think the most memorable part of it was just having the folks there that had been a big part of the process that built towards getting the award, and with the Honor Platoon being there, it was certainly a big part of the success we’ve had over the years. It was nice having my fellow instructors there along with some of the teachers as well,” said Campbell. The Spartan community congratulates Campbell on this impressive honor.