Setting the Future of Volleyball 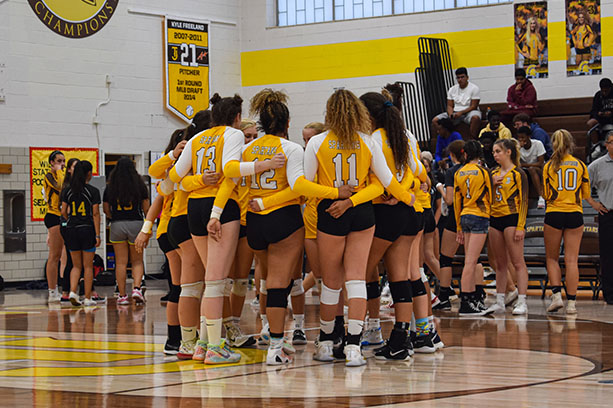 The girls' volleyball season was full of success as they worked together to make it to the state playoffs. photo by Aidan Byford.

Girls rocked this season on the court with killer scores and plays.

From freshmen that are just starting to seniors playing one final time, this season of girls’ volleyball was a great one. With great scores and amazing plays, everyone was on their A-game. Captains Bella Williams, senior, and Olivia Oss, sophomore, led the team to success, including the team going the farthest they ever had, getting to the second round of state. The team sadly lost to Cheyenne Mountain in the third round of the playoffs. Though this is the last year for many players, that did not stop them from trying their hardest.

Guided by Coach Erik Rhee and assistant coach Ian Byrne, the team has been striving for success this whole season. With having practice every day from 5:30-7:30 and hours upon hours of getting to bond with each other, the girls were ready to take this season by storm. “We had more talent then we’ve ever had,” mentioned senior Grace Alexander. “Our team dynamic especially grew this year.” With a 17-11 overall rating, the girls have conquered many challenges thrown at them. The girls have beat teams such as Ponderosa (3-0) and Middle Park (3-0).

This year, a total of eleven seniors held the court, making it hard for this year to be their last. “You’ve played with all the girls for four years straight and it’s sad to see them all go,” noted senior Pana Reiva. With all these girls leaving, it will be hard to adjust themselves to new a team. Freshman Laila Hilton remarked, “I’m excited to see how we grow and connect and see if we can make it even further.”

Volleyball is a sport that requires trust and faith in your teammates. This year, the team played as some have never seen before. With new players and some who played for their last time, they pulled off success, having to adapt to change through every obstacle thrown at them. Though the season just came to an end, the girls played their hearts out this year, forging bonds that will last a lifetime.

The girls’ volleyball season was full of success as they worked together to make it to the state playoffs. photo by Aidan Byford.