She Kills Monsters Takes Over the Stage 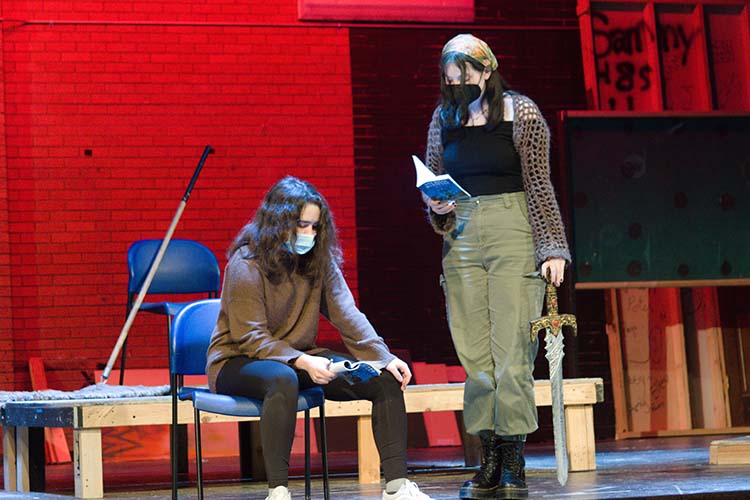 Thomas Jefferson High School’s Theater Department is ready for the opening night of their production, She Kills Monsters.

After being out of commission for a year and a half, TJ Theater is finally back! This winter, the dramatic comedy She Kills Monsters will be taking over the stage on January 27th-29th, at 7:00 p.m.. Cast and crew are allowed two guests per night, see any of them if interested in attending.

This story follows Agnes Evans (senior Elle Benson) as she leaves her home in Ohio following the death of her estranged sister, Tilly (sophomore Alex Baca). When Agnes discovers her sister’s Dungeons and Dragons (D&D) notebook, she becomes enthralled in Tilly’s fictional realm. Agnes ventures on a journey of fantasy and adventure in order to grieve her late sister and learn more about Tilly’s life. This play, written by Qui Nguyen, is packed with homicidal fairies, cruel ogres, and witty dialogue.

This show is unlike any other production TJ Theater has introduced to the stage. The representation of queer characters in this show is “pretty unique,” and, “There’s a deep storyline talking about internalized homophobia amongst all the action,” said Baca. She Kills Monsters sets out to tackle the authentic topics teenagers deal with and begins to destigmatize the gaming community. Nguyen, the award-winning playwright and self-proclaimed ‘geek,’ has been known for utilizing pop-culture, fantasy, and writing specifically for his audience. Nguyen commented on the impact that his show has made on high school students to the New York Times, in which he said, “With professional productions, I remember things, but they didn’t change my life the way the shows I did in high school and college did,” Nguyen said. “So I’m glad to be part of these people’s artistic journey.”

Taking place in the 90s in a D&D fantasy land, She Kills Monsters deconstructs the stigmas of women’s involvement in the gaming world. For decades, much of the gaming world has been viewed as a men’s activity. This is seen in the gaming industry when they advertise and target games towards men, which is what makes this show so unique. “One of the main characters, Tilly, is an avid D&D player and her party is made up of two other high school girls. It is a key point in the play that she is unique because of this. When this play is set, gaming was extremely stigmatized and it was probably even more stigmatized than it is now,” said Benson. This is just one of the many examples of why this show is so extraordinary.

She Kills Monsters is a show picked and produced by the students, for the students. Andre Moss, TJ’s new theater teacher and director, will be making his directorial debut. Completely by student choice, Moss had the Theater 3 students individually pitch a play that they wanted to perform. Then, he sent the options out to the drama club and all of his theater classes to choose what would gauge the most student interest. Moss said that “It has been a really fun process to figure out how to take something from just words on a page to a living breathing set and performances. People bring their own unique personalities and insights to the process and it becomes a reflection of everyone’s input, which is really incredible.”

The cast and crew members have been incredibly dedicated to the production of this show since their auditions in October. Spending hours each day after school in rehearsals, each audience member will undoubtedly feel the time and effort put into their performance. From perfecting fight scene choreography to creating the sets, this show will be a reflection of the cast and crew’s voice. Senior Cece Prime-Morales, the stage manager this year, has been overseeing everything from the set and prop construction to costumes, lights, and sound. “It is always a little difficult trying to bring someone else’s vision to life,” Prime-Morales explained. The tech crew has been incredibly hard-working and dedicated to this process despite the challenges; they have come in on Saturdays to build the set and have had support from outside of the crew as well.

Anyone who is a lover of fantasy, amazing writing, and passionate performers will truly love watching this performance on January 27th-29th, at 7:00 pm. “You should come to learn something,” Moss said. To buy tickets, please reach out to any of the cast and crew members!