Shiffrin’s Journey on the Slopes 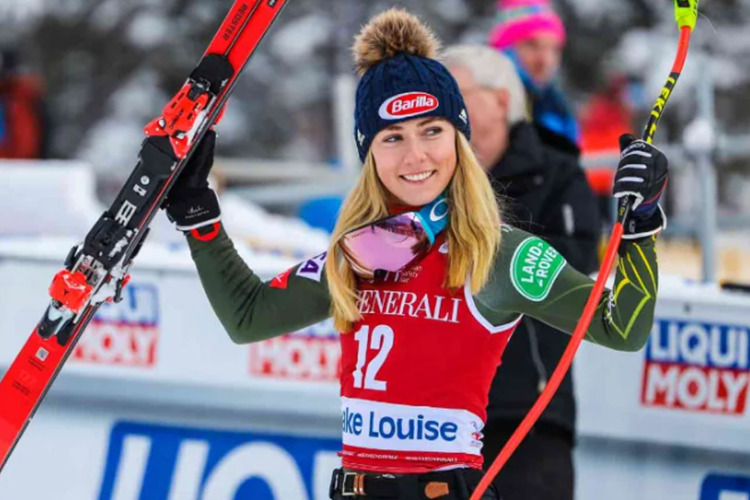 Olympic skier, Mikaela Shiffrin, was seen smiling after her race on the slopes. Photo by Jacob Gijy

Mikaela Shiffrin talks about how the Olympics took a toll on her mental health.

Who is Mikaela Shiffrin? She is best known as an Olympic skier with two gold medals and one silver, along with many other awards, including six first-place wins in the World Cup. Shiffrin quickly became known as one of the greatest American skiers, but no one really knows her background outside of skiing. Shiffrin grew up in Edwards, a small mountain town in Colorado. Edwards is right by Vail, a well-known skiing town. Skiing became a big part of Shiffrin’s life quickly. Both her brother, Taylor, and father, Jeff, skied in college, while her mother, Eileen, was also an accomplished skier. From the very beginning, Shiffrin knew she loved skiing, even at the age of two while she was skiing down her driveway; some would say she was born to be a skier.

Shiffrin is extremely close with her family, she said her mother was her biggest inspiration, and her father was her biggest supporter. From the very start of her career, her father was her photographer and was there, camera in hand, when she won her first Olympic medal. Sadly he passed away in a tragic accident in 2019. According to NBC Washington at the time of his passing, Shiffrin was doing a photoshoot for Sports Illustrated. “The photos look amazing. I look like I’m on top of the world,” she said, “as all that was happening for me, my dad was being rushed to the hospital.” Shiffrin took her father’s death hard, and she even considered quitting skiing. “She was so devastated. She couldn’t stop crying or even get out of bed,” her mother said. It was Shiffrin’s brother, Taylor, who finally got her out of bed. Taylor came into Shiffrin’s room and said, “You cannot give up; you can’t quit on us.” Taylor said. “It’s what dad would want. It’s how Dad would handle it. A phrase I had heard was ‘when you’re going through hell, keep going. Don’t stop,’” as stated in an article for NBC Chicago. Shiffrin continued to compete after her long break for her father’s death and ended up setting the record for the most World Cup wins in a single discipline with her 47th win. When asked about how competing was without her father Shiffrin commented “It’s definitely different without him here,” she told NBC Sports. “It’s the place where I feel most connected to him. It’s kind of hard to feel that anywhere else.”

Just recently, Shiffrin competed in the 2022 Winter Olympics and was expected to win the gold. When she got on the slopes though, Shiffrin did something no one expected. She was in five individual events and did not get on the podium for any of them. Her first race was the women’s giant slalom qualifying run, where Shiffrin slipped and did not finish; this was shocking to everyone. What was more shocking was when Shiffrin was unable to finish her second race and third race. According to the International Ski Federation, the last time Shiffrin did not finish a slalom race in the first qualifying run was in 2017 during a World Cup competition. She also did not place in her other two races. Shiffrin was also in the mixed team event and barely missed the medal. Shiffrin and the rest of the American ski team were 0.42 seconds away from being on the podium. When interviewed after her final race, the mixed team event, Shiffrin commented in an ESPN article, “I have had a lot of disappointing moments at these games, today is not one of them, today is my favorite memory.”  Shiffrin did, however, make history as the first woman to compete in all six alpine ski events in the Olympics. A Thomas Jefferson high school junior, Sarah Lakous, says “I was disappointed to not see Shiffrin win another medal for the US team, but she is still one of my favorite skiers to watch and support.”

The pressure that is put on professional athletes, especially Olympic athletes, is a lot. Sometimes people forget that they are just humans, and humans can make mistakes. The famous Olympic gymnast, Simone Biles, sat out of the Olympics because of the toll the sport took on her mental health. When it comes to pressure affecting performances, Shiffrin is no exception. In an article written by Shadia Nasralla on reuter.com, Shiffrin says “I mean, there’s a lot of talk about this battle between athletes and pressure, and that media falls on the pressure side of things,” commented Shiffrin. “When there is pressure, and there’s some nerves and the feeling that I want to do well, I always just go back to that fundamental idea that good skiing will be there for me. So, it’s not the end of the world, and it’s stupid to care this much, but I feel that I have to question a lot now.” The pressure that the athletes put on themselves is enough for someone to crack, with the pressure of the media and everyone watching you compete for your country on top of that can be too much. Shiffrin was absolutely gutted by the way she performed in these Olympics, but she is lucky that she has such amazing supporters to be there for her during the good and the bad time, including her boyfriend, Aleksander Kilde, another Olympic skier, who was right by her side the entire time. Taylor was watching from home, but commented that he was proud that she was even at the Olympics skiing after her father’s sudden death and that “she has nothing left to prove.” Many other Olympic athletes have also shown their support for Shiffrin, including Biles, who tweeted three hearts to Shiffrin after the race.