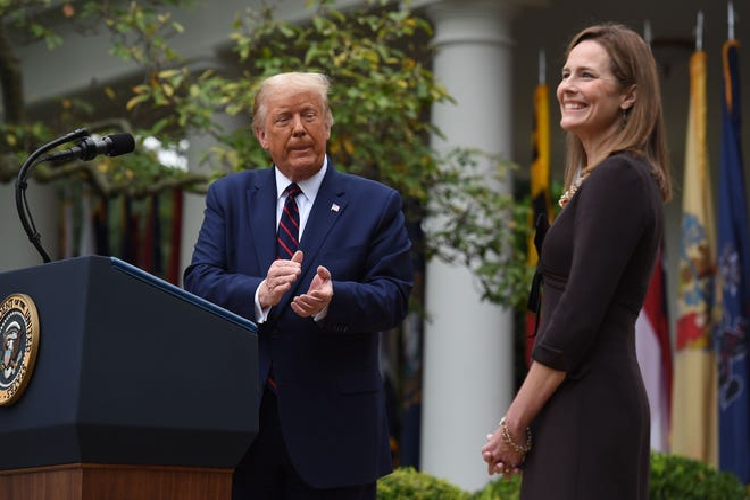 An image of Amy Coney Barrett and President Trump at her confirmation. photo courtesy of USA Today.

A deep dive into the views and potential impact of the new Supreme Court Justice Amy Coney Barrett.

In the past month, Amy Coney Barrett has become a household name. After the passing of Justice Ruth Bader Ginsburg, President Trump pushed his nominee for the newest Supreme Court Justice Amy Coney Barrett. Her nomination had great support from conservatives while major pushback was shown from those inside the Democratic party. With Barrett being confirmed on October 26, 2020, it is now extremely important to understand what her views are and how this can affect the rights of the American people.

After graduating from Notre Dame Law School, Barrett spent a large portion of her career as a clerk for Justice Antonin Scalia. Similar to Scalia, she is not only right-leaning but also an originalist. This means that she believes the interpretation of the Constitution should be based upon what the founding fathers intended it to be interpreted as. Barrett also spent her time teaching at her alma mater and was praised by the faculty and students. A previous student told BBC, “I feel somewhat conflicted because… she’s a great professor. She never brought up politics in her classroom… But I do not agree with her ideologies at all. I don’t think she would be good for this country and the Supreme Court.” Another student described Barrett as “collegial, civil, fair-minded, intellectually sharp, and devoted to the rule of law secured by our Constitution.” This division between opinions from her students is being mirrored in the division of opinions surrounding Barrett within our country.

For the left-leaning Americans, Barrett’s confirmation was considered an abomination. Not only do her views go against the views of many liberals, but there was also uproar connected to the timing of her confirmation because Barrett was President Trump’s nomination and she was confirmed only eight days before the election in which 60 million Americans had already voted for their president. Her political views also create a divide between her and liberals. For conservative Americans, Barrett’s confirmation is a blessing: she made the Supreme Court six and three, giving Republicans the lead. As her political views are the same as many Republicans, it is no wonder that those on the right were thrilled.

The main views that have people praising or condemning Barrett are focused on abortion, LGBTQIA+ rights, health care, and gun rights. In terms of abortion, Trump has stated that his nomination would help overturn the Roe vs. Wade decision, removing women’s constitutional right to an abortion. Looking at Barrett’s history of voting on cases when she was a judge in Indiana, it is clear where her stance is on abortion. The most discernible case was in 2018 regarding an Indiana law banning abortions based upon sex or disability of the fetus. In this case, Barrett joined a dissent that stated, “None of the court’s abortion decisions holds that states are powerless to prevent abortions designed to choose the sex, race and other attributes of children.” In another case surrounding a law tightening the notification of parents of minors looking to seek an abortion, Barrett joined the losing opinion that stated, “Preventing a state statute from taking effect is a judicial act of extraordinary gravity in our federal structure.” She saw that the court’s ruling was premature. Her opinions shown in cases trying to restrict abortions have raised concerns for liberals who are in support of the Roe vs. Wade decision.

The topic of LGBTQIA+ rights is more of a gray area when it comes to Barrett. Though there have not been any rulings or votings connected to cases involving the community that would warrant concerns, this is mainly connected to her personal beliefs. Barrett is a devout Catholic and has affiliations to a conservative Christian group, People of Praise. This group is extremely anti-LGBTQIA+ and has been flagged by multiple LGBTQIA+ groups. Though Barrett has said multiple times that she will not let her personal beliefs affect her rulings, it is understandable for the community to be nervous, especially considering the review of the Obergefell vs. Hodge decision or the same-sex marriage decision. An advocacy group known as the Human Rights Campaign has described Barrett’s confirmation as “devastating for sexual and reproductive health and rights.”

On November 10th, the Supreme Court will be hearing arguments on the latest challenges of the Affordable Health Care Act. Since Barrett was confirmed, she will be on that bench. This also raises concerns for the Democrats in favor of the act. Barrett’s occupancy will add unpredictability to the rulings of the Court considering when Justice Ginsburg was alive, there would’ve been no way for the dismantling of the law. In 2017, Barrett wrote critically about Chief Justice Roberts’ ruling on the act, stating she found that “Chief Justice Roberts pushed the Affordable Care Act beyond its plausible meaning to save the statute.” Though nothing is for certain, many are worried about Barrett supporting the dismantling of the act.

Discrimination and gun rights are topics surrounding Barrett that may seem insignificant, but could have monumental impacts. In regards to gun rights, it is not confirmed where Barretts stands in relation to the Second Amendment. Though she has been adamant that felony convicts who committed nonviolent crimes should still be able to own a weapon, the only thing we can be certain of is that with Barrett on the bench, the Supreme Court will be hearing more Second Amendment cases. Discrimination is focused on a specific case in which Barrett revived a lawsuit from a student at Purdue University who got suspended after the university discovered he had committed sexual violence. According to Barrett, “Purdue’s process fell short of what even a high school must provide to a student facing a days-long suspension.” She also has stated she would’ve overturned a ruling made by the court that would’ve allowed officials to deny a green card to immigrants who are likely to need public assistance.

In our current political climate, no matter one’s political stance, it has become increasingly important to understand who is in power in our government. Many agree with the views of Amy Coney Barrett and are excited to see what she can do for our country, while others are concerned about the impact the decisions of the new Supreme Court Justice will make. How the confirmation of Amy Coney Barrett will affect the U.S can be predicted based upon the cases she has overseen. It seems that Americans should prepare for a very different Supreme Court than they have previously seen.