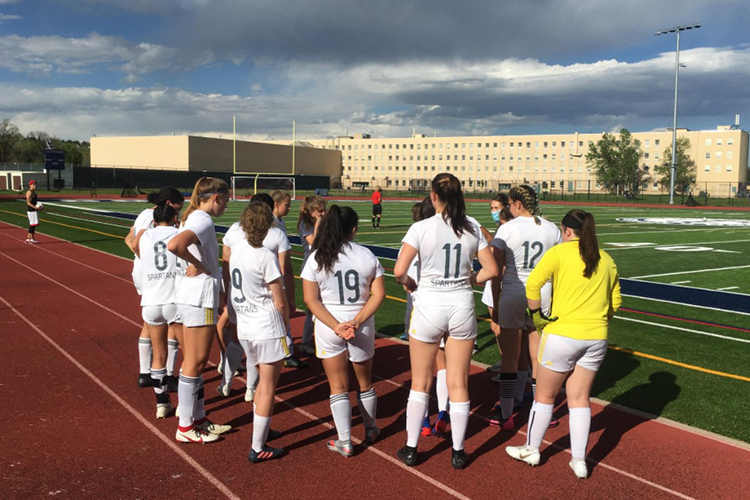 TJ Girls' Soccer gets ready for their team cheer before the kickoff to the TJ vs. JFK game. photo by Roxanne Wilkerson

Though Girls’ Soccer was approved to take place in DPS this year, there are still many changes that have been made due to COVID restrictions.

TJ Girls’ Soccer looks quite different this year. Many changes have been made as a result of the pandemic and concerns for safety. For instance, the program is traditionally held from February to May, though the 2021 season has been shortened and switched to later dates, going from April to June. This is a result of CHSAA’s (Colorado High School Activities Association) decision to arrange sports into certain lettered sections of the school year, girls soccer being a part of Season D. Along with this, practice times have been shortened to a maximum of 90 minutes as well. Due to these shortened seasons, the competition period has been crammed together and all sports are required to only compete with schools within their district.

Along with the change of season dates, TJ’s Girls’ Soccer program is much smaller than it has been in previous years. Traditionally, the program consists of two separate teams, Junior Varsity and Varsity. Approximately 25 girls showed up for tryouts this season, which is not enough players to have two complete teams. As a result, Varsity Coach Beth Hinz had to make cuts to the team, which has never been done for the program in the past. The case is usually once you register for the sport, you make a team no matter what. Speaking on this, Coach Hinz commented, “Every girl that was cut deserved to be on a team so that made it a sad,

disheartening experience. . .[The Varsity players] have taken on the season with resolution and strong hearts to play for their school and enjoy playing soccer together. The captains, Lauren Reid, Grace Stelzer, Grace Leonard and Lauren Simasko have worked hard everyday to positively influence their teammates. This team is one of my favorites because of the diversity of personalities, playing experiences and camaraderie they share. Every day I thank my lucky stars that I get to be a part of this 2020-2021 team.” Girl’s Soccer has been known to be one of the more popular sports at the school, having about 50 girls participate for the 2020 season. Considering the smaller turnout that has occurred this season, it is likely that most athletes dropped the sport due to their own safety concerns about playing a contact sport in a pandemic.

With respect to these concerns, the program follows daily precautions to ensure the safety of each athlete. Before each practice, a coach is responsible for checking each athlete in by checking their temperature and asking the required health questions. In addition to this precaution, athletes must wear their masks when standing in close proximity and must keep it on during practice. Regarding game play, masks are not required. Another change to the sport is that there are no “good game” high fives. Traditionally, at the end of each game, both teams line up and high five each opposing player, followed by a good game comment. As a result of the pandemic, the team is supposed to avoid unnecessary contact as much as possible. So as an alternate gesture, each team walks over to the half-line and claps for their opposing team. TJ’s team shows a great deal of support for their own teammates as well. They gather as a team to cheer at the start and end of each game, as well as at the end of each practice. Hinz has also paired players up as “support buddies” for each game, so that each player focuses on one teammate and cheers them on throughout the game. Jocelyn Millard, the Varsity goalkeeper, comments on the team’s collaboration, claiming, “Every day we are together and no one fails to support one another. We are an amazing supportive team, and it’s one of the best families out there.”

Though many changes have been made to TJ’s Girls’ Soccer program for the 2021 season, every athlete continues to collaborate as a team and keep their hopes up for the season. With an encouraging coaching staff and the charisma of the team captains, the players are excited to fight their hardest this season, despite the shortened competition dates and practice times. To all Girls Soccer athletes, good luck in competition this year!