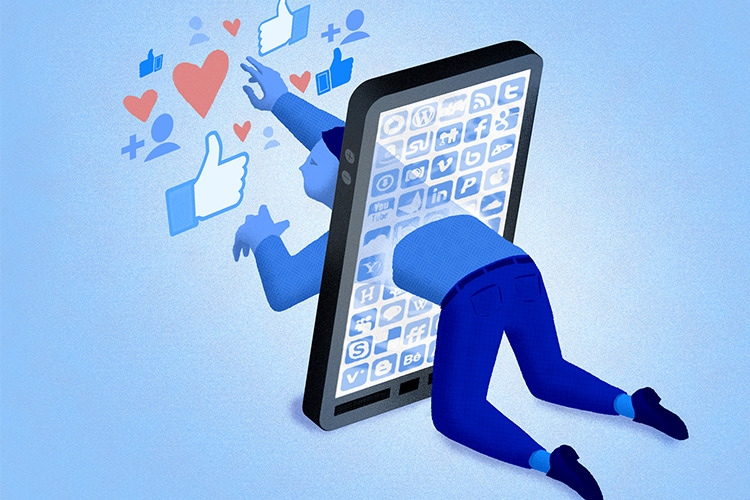 Social media, designed to bring us together, is pushing us apart.

In February of 2020, self-proclaimed “internet crusader” and youth advocate, Colin Kartchner, came to speak to Thomas Jefferson High School about the dangers of social media addiction. I was expecting a traditional lecture about how our generation is lazy, socially disconnected, and addicted to our phones, but instead, Kartchner sought to provide some answers as to why so many have fallen victim to social media.

After kicking off his talk with humorous remarks and stories of his experiences with social media, his tone became more somber as he depicted people being pulled into a realm of light-up buttons, catchy music, and impulsive trends social media platforms push upon their users. Face to face interaction is being replaced by superficial photos and videos on a virtual page, distancing us from one-another.

Unlike other speakers who solely blame kids, Kartchner shifted some of the blame to parents for facilitating this behavior. He claimed many parents with young kids, rather than taking the time to come up with something for them to do, would instead choose to give their kids electronic devices to keep them occupied. While this is not always avoidable since many parents do not have time to babysit their children during the workday, it should not become the go-to solution. Ignoring children from a young age inhibits the development of essential social and problem-solving skills, causing them to spend more time on devices as they get older. Many parents who grumble at their teenagers for being glued to their phones all day often fail to recognize two things. One, parents allowed their kids to develop this habit. Two, many parents are addicted themselves. If parents cannot put their own phones down, they cannot expect their children to do the same.

Towards the end of his talk, Kartchner asked those in the audience who had gotten a hug from their parents before coming to school that day to raise their hands. Some raised their hands, but there were many who did not. He wanted to show us the contrast between parents who can recognize social media as unimportant and those who have been dragged so far into the vortex they do not even acknowledge their own children. So, he proposed that we each hug the person next to us for eight seconds. The simple act of embracing the person next to us facilitated a physical and interpersonal connection that many had not felt in a long time. Kartchner reminded us that we need face-to-face connection to thrive. When we shut each other out and hide behind computer screens, we start to lose our humanity.

Social media was originally created to bring people together using the internet. On Facebook, users can post details about their lives like what city they live in, where they went to college, or their relationship status. On Twitter, users are allowed 300-letter posts in which they can write about anything they want. On Instagram, users can post pictures of themselves and their friends. On Snapchat, users can post videos with fun digital effects. On TikTok, users can post a variety of content, such as comedic skits, public service announcements, news events, and even dances.

Each platform has its own set of “trends” where users make posts surrounding a specific topic. They can range anywhere from wholesome and lighthearted to morally questionable or flat-out illegal. These trends are most popular among teenagers who use social media as a means to fit in with their peers. In these formative years, the full force of peer pressure bears a heavy weight on their shoulders as no one wants to be the odd one out. It does not matter how outlandish the trend may be or what consequences it could bring because simply participating in it is much more important.

However, many forget that social media is highly superficial. Each post is carefully crafted to present only the information one wants to make public, giving their viewers, especially teenagers, the impression that people’s lives are absolutely perfect which may cause them to feel insecure or depressed about their own life. And worse, it can convince teens that they must hide any negative feelings from the people who care about them, such as depression, anxiety, loneliness, drug use, or even suicidal thoughts.

Seeing a never ending stream of superficial posts also causes teens to worry they are missing out on fun with friends which can negatively affect self-esteem, trigger anxiety, and fuel even greater social media usage to address that fear. It may compel someone to pick up their phone every few minutes to check for new posts. Constant round-the-clock hyper connectivity can trigger impulse control problems, disrupt sleep patterns, and interrupt concentration in daily activities. A study at the University of Pennsylvania found that increased social media usage actually increases feelings of loneliness rather than decreasing it. The reasoning behind it is simple: humans need face-to-face connection to be mentally healthy. Nothing reduces stress and stimulates the mind more effectively than eye-contact with someone who cares about you.

Most social media platforms are well aware of these issues, but some have resorted to exploiting those who are addicted instead of encouraging them to take a break. Most notably, Facebook and Instagram have fallen under public scrutiny for their algorithms that promote harmful content. For example, Instagram tends to recommend posts of eating disorders and anorexia to teenage girls on the platform. Over time, it ingrains an arbitrary standard of beauty, making them believe they cannot be considered pretty unless they look skinny. Once their self-esteem is lowered, the platform can then market beauty products that are often not needed.

In the fall of 2021, former Facebook employee Frances Haugen testified to Congress that Facebook’s business practices harm children. In her opening remarks to the Senate subcommittee, she said the “company’s leadership knows how to make Facebook and Instagram safer but won’t make the necessary changes because they have put their astronomical profits before people.” Internal reports presented at the hearing showed the company was aware of the risks the platform poses to young users. Among teens surveyed by the company who reported suicidal thoughts, 13% of British users and 6% of American users were able to trace the issue to Instagram. Researchers found that 32% of teenage girls who reported feeling bad about their bodies said Instagram made them feel worse. The reports also warned that Instagram’s explore page, which provides users with curated posts from a variety of different accounts, can push users to view harmful content. Given the data, several lawmakers have voiced their concerns about the company’s practices. Democratic Congresswoman Lori Trahan said the documents “show that the company’s failure to protect children on Instagram – especially young girls – is outright neglect, and it’s been going on for years.” Similarly, Republican Congresswoman Cathy McMorris Rodgers said the data “leaves us wondering what else they are hiding.”

Social media usage has only increased over the past two years. Due to lockdowns and staying home to avoid the virus, people around the world have increased their screen time dramatically, with teens being among those hardest hit by the negative mental health effects. While emergency department visits among adolescents decreased overall throughout the pandemic, researchers at the Centers for Disease Control and Prevention found that among girls aged 12-17, more of those ER visits were associated with eating and “tic” disorders compared to 2019. Tic disorders are described as repeated twitches, movements, or sounds that are done involuntarily. Doctor Neha Chaudhary, a child psychiatrist at Harvard Medical School, said the results of the report were unsurprising. “It’s no wonder [teens’] mental health has been declining when their usual supports – like structure, routine, and peer connections – have been ripped out from under them,” she said.

People tend to not post about their struggles online, which may be why so many people like it. If we can pretend struggle does not exist then reality can be whatever we want, but when you ignore reality, it tends to come back and bite you later on. Burying mental health issues will always make them worse, which is why it is important to be smart while using social media. This could mean using it to connect with friends, using it in moderation, or not using it at all. The most important factor is your mental health. Ask yourself: “Is this making me feel better or worse about myself?” Or, “Am I doing this for myself, or out of peer pressure?” If so, it might be time to put your phone down, take a deep breath, and re-engage with the world that exists outside of the glowing rectangle in your hands.