Spartans Around the World 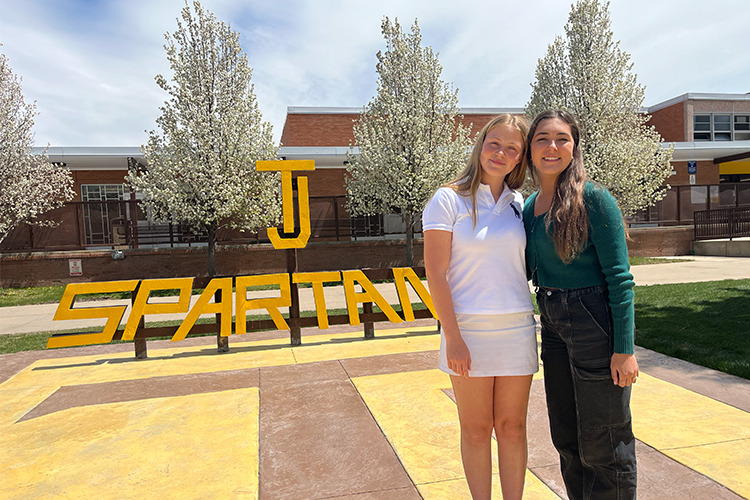 Connections for life and an exchange of culture, that is what it is all about. photo by Shana Saint-Phard

Teresa Silveira, Loup Povolotsky, and Grace Leonard provide a great insight into a life unfamiliar to many.

Ever wonder what it would be like to study in another country? Maybe for college or for a career? Well, at Thomas Jefferson High School, there are exchange students who travel from all around the world to the destination that many would consider their neighborhood. They contribute to the school culture experienced by every student in attendance and provide an interesting opportunity for native students to learn more about the world around them.

Teresa Silveira is a senior at TJ who has traveled from her home country of Portugal to experience a new perspective. Although exchange students are the friends of many and have relationships with the great teachers of the school, the process that gets them to an entirely new city may be unknown to many, and the motivation for such a transition is just as unrevealed. How much does Denver, Colorado, differ from Lisbon, Portugal?Well, Silveira excitedly includes that “it’s completely different” and that “everyone is so nice.” Being here since early August, Silveira has somewhat accustomed herself to what life in the United States entails; however, there was a time early in her experience that required bravery to take on the tribulations that are only inherent in starting a new year of high school. “[The first day of school] was the scariest day of my life. I didn’t know anyone. My main goal was to have lunch with someone.” Revealing that she was able to accomplish her day one goals indicates the interesting nature of tackling such a complicated transition. Perhaps the curiosity of a new culture helped ease any nervousness and allowed for the understanding of what life at TJ is like. The trafficked hallways of the building revealed many things to Silveira, but mainly the opportunity “to know new things and make new friends.” She included that “it is more about the friends” and that the nature of her interactions has expanded her capabilities. “I definitely grew up so much as a person. You get more mature. You have to start all over. Of course you have people to help you but it’s not the same thing.” One can imagine that such an experience would provide an individual with great opportunities to expand upon what they already know about the world.

Loup Povolotsky is also a senior at TJ. In early August she traveled from Belgium to Colorado. She explained that her motivation behind moving her life so many miles away from her home stemmed from her ambition “to learn the language” as “English is pretty important.” Povolotsky added that she also “wanted more independence and to go away for a year to know [her]self better.” Ultimately revealing that she has furthered her knowledge of herself, Povolotsky looks to her travels back to Europe at the end of the school year with a unique understanding of a different culture. Similar to that of Silveira, Povolotsky shared her initial worries that were present at the beginning of the school year. “I was nervous. I was scared that I wouldn’t match with my family or have independence.” Revealing that her host family has been fantastic and that her independence has granted her great opportunities to learn, Povolotsky would completely prove to have taken full advantage of her travel to the United States. Povolotsky has involved herself in many activities made available at TJ. Of these, she has played on both the school’s basketball team and tennis team. Integrating herself into TJ’s culture has undoubtedly contributed greatly to the school environment this year and has provided her fellow classmates, teammates, and peers an opportunity to bond with her.

Senior Grace Leonard provides a unique perspective into the exchange student process as two years ago, her family served host family to exchange student Lara Göpfert who arrived at TJ from Germany. Although it was when she was a sophomore, Leonard remembers her experience like it was yesterday. Leonard mentioned that it was all so unfamiliar to her at first. “It was very exciting because it is this person coming to live with you. I remember the first time I met her, I was so nervous.” Leonard explained how it was a unique experience living with a new person; however, they ultimately grew incredibly close. Including that Göpfert would be visiting her family soon, Leonard provided a great testament to how close the bond between the two parties became. “She has impacted my life so much in the little ways that you don’t even realize. She made me more careless in a good way, like ‘just go for it’.” Göpfert provided a dynamic that inspired a great perspective in her host family. Leonard concluded that “I look back on it now and it was such a cool experience and I wouldn’t change it for anything.”

As the seniors of TJ look to the end of their high school experience, perhaps interactions with some of the school’s exchange students would provoke thoughts of abroad learning and experience. If the stories of Silveira and Povolotsky are any indication, an exchange student is provided with an exchange of cultures that help with something that everyone inherently looks for: understanding.