Spartans Swimming Through the Season 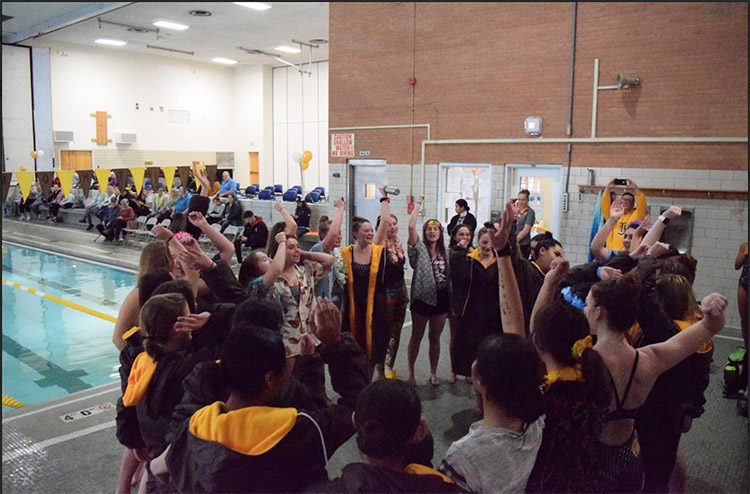 The TJ Girls' swim team finish off their season strong with many girls at state, ending the season on a great note. photo courtesy of Camdyn Berry.

The girls’ swim team crushes another season, with many going to A-Leagues and even state.

The Thomas Jefferson Girls’ Swim and Dive team dominated this season, conquering other teams and growing significantly throughout this winter. By having the girls go above and beyond to break personal records and compete in A-Leagues and state, the team worked together to push each other to overcome their limits. This season was one for the books, as the girls have worked extremely hard, which is a nice tribute to the 12 seniors who are graduating.

Leading the girls was head coach Justine Sullivan, who has been coaching at TJ for over five years. By striving to get the girls to work as hard as they can, they had practice every day after school for two hours and practices on Saturday mornings for around three hours. “With the hard work that we put in and all the yards of swimming, I think our bond and just how close the team was made it all-around successful,” explained Sullivan. Having a coach that believed in the girls and had a true connection with them gave them the confidence and strength to work hard.

This season, the girls worked extremely hard. With 14 girls making it to A-Leagues, many surpassed the goals that they set for themselves. Junior and swimmer Laura Zelenka explained, “This season I made it to A league finals, and I pushed to three seconds away from the state time in the 100 flies.” The girls worked hard to get as far as they did. Though a high school sport, the girls had grades and other responsibilities to worry about, yet they still found a way to put the team first and fight for what they deserved.

Not only was this season great for the girls to physically push themselves, but it also helped them advance mentally. With practices every day, the girls held themselves responsible for their time management and their own growth in the sport. “It has impacted me a lot, and it has taught me how to work hard and reach my goals,” described sophomore Denise Hanselman.

The swim and dive team pushed to achieve their goals and get better at their event. In doing so, the girls developed a strong bond with one another. With swim being an individual sport, the girls always help each other in whatever ways they can. “All of us want to see each other succeed, so it’s really awesome to have someone there to talk about your race when you’re done, or just talking about something completely random: that’s cool too,” said Zelenka. Creating a bond with teammates made the season just that much better for the girls, letting them enjoy every day of practice by being surrounded by friends.

In the end, the season came down to the girls’ raw talent. With students such as junior Caitlin Beery getting first in the 500 free and second in the 200 IM and senior Phoebe Briney placing second in the 50 free and fourth in the 100 free. The girls gave A-Leagues their all, with some even making it to state. Those who did have immense support from the whole team, with freshman Kate Little saying her favorite moment was, “TJ getting second place in the 200 free relays at state and watching Georgia H make state in the 500 at the league.” The support that the qualifiers received only encouraged them to push harder.

This season for girls’ swim and dive was one for the books. By encouraging themselves and their teammates to work harder, results were shown. The girls strove for success and were met with the answers that they sought. However,  the results were not the driving point of the season. The friendships and bonds they made with each other are what the girls will really take away from this season.