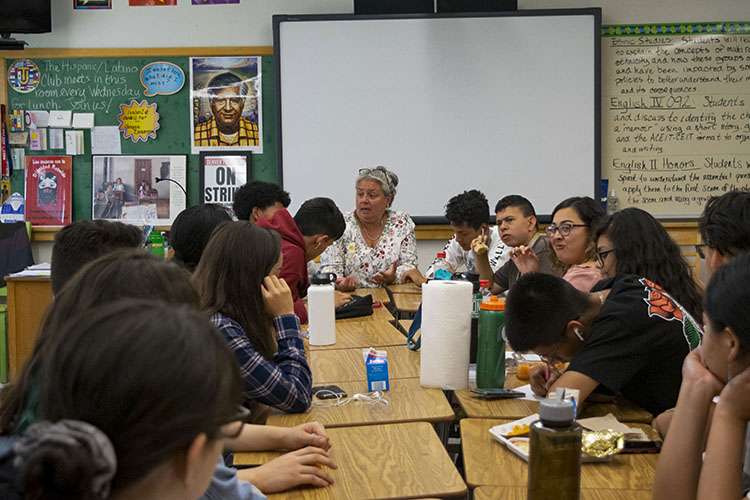 The Hispanic and Latino Club members gather to talk and enjoy lunch together. photo courtesy of the Yearbook Team

The Hispanic and Latino club has been a great success so far by helping families feel supported.

The Hispanic and Latino Club is made up of a group of students at Thomas Jefferson High School who believe everyone deserves equal rights and is able to be their own person, regardless of background or ethnicity. Thanks to English teacher Lynne Valencia, the club has been up and running for four years after being restarted by the students. Everyone is welcome to join and allies are welcomed with open arms to connect and contribute. Although his club has been in play for only a short amount of time, it has impacted many lives. The club has helped students find a safe place to talk about their well-being and check up on each other. The members of this club are very caring and always make sure everyone is feeling their best so they can do their best. Senior Emilie Franco explained, “Everybody is so welcoming and this year hasn’t been as rough because of them.”

This club gains its popularity by popping up in weekly announcements on the Spartan Edition for information about what they sell after school. Their products vary from hispanic candies and general food items found in Mexico such as Agua de Horchata (Horchata Water), Paletas de Mango (Mango Lollipops), Nachos, and many more. “The money we make goes to immigration facilities for people that got separated from their families at the border,” described Franco. The club continues to grow in members every year, spreading and influencing people to join their family. Club president, senior Vanessa Villegas, and vice president, senior Angelo Castro, have only been in the club for a short time. Despite that, they know how to bring the group together as one huge family. Villegas has been in the club for two years and Castro has been in the club for about a year. Every club has its own way of working, and the Hispanic and Latino club have found it best to put in a voting system to make sure everyone is included in the process of deciding representatives. It is a very special opportunity to be a part of a club or any type of team at TJ because members become united over time. During every meeting, a new topic is brought up to make sure everything is covered and everyone feels like they have had a chance to talk.

For example, in the first week of November, members of the club spoke about how Dia de Los Muertos is a big part of Hispanic culture and how much it is celebrated during the holidays. Group members also discuss the struggles of immigrants and how they have to live in the United States while being undocumented. There are multiple problems with immigration that are talked about during meetings, though it is not specific to Hispanic issues, as other cultures also face these issues and the members discuss how to help people in need. This club is also very close with the 5280 club, and the clubs gather together sometimes to watch the Netflix series “Undocumented” and to write Christmas cards for the people in the Aurora ICE Detention Center.

Overall, the Hispanic and Latino club has influenced many people to join a movement and help other foundations gather together with other clubs to support families in need of help to make their situation better. The club gathers on Wednesdays during lunch in room 218 and anyone who wishes to join will be welcomed by the club.