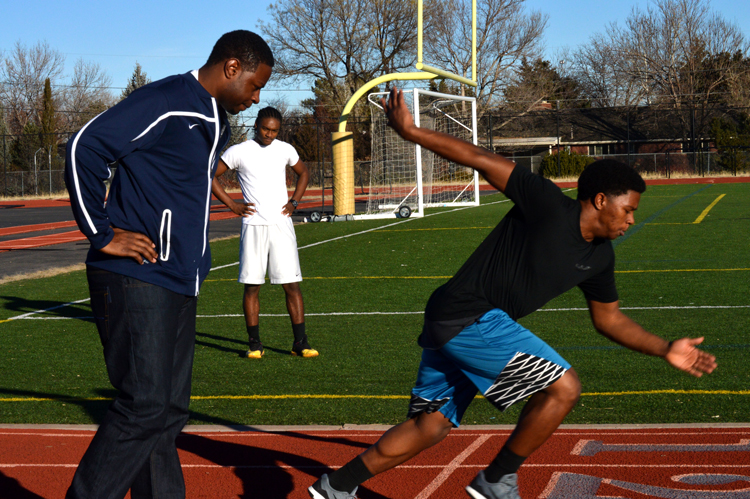 Reed encourages his runners to work hard and do their best. photo by Maggie Fairfield

TJ’s track team is shaping up with the leadership of a new coach.

In the 2014-2015 season, TJ’s track team experienced a huge turnaround when a new head coach was hired. After numerous previous coaches had stepped in as temporary replacements, TJ decided it was time to find someone permanent, and Darius Reed stepped up to the challenge.

Reed has been involved with track for most of his life; he graduated from George Washington High School in 2006, and during his time there, he was quite a star. “I led the nation my junior and my senior year in the hurdles and at one point, during my senior year, I was running number one in the world,” Reed explained. After high school, Reed received a full ride scholarship to the University of California, Los Angeles (UCLA), where he continued running track. “I was the fastest freshman in the country,” said Reed. Reed attended UCLA for three years, although he only ran one. He eventually transferred to Metropolitan State University of Denver to be closer to home, where he went to nationals for track both years he was there, and led the nation multiple times during that period. Reed ended up majoring in Human Performance and Sports (adult fitness emphasis) with a minor in Sociology. From there, he went on to volunteer as a football coach for Denver West High School, ultimately leading him to the head coaching position here at TJ.

Much has changed since Reed began coaching at TJ. “A lot more people have gotten more competitive. Now, it’s like we want to win and show everybody that TJ is good and that we can do this,” explained Madeline Jacobsen, senior and captain of the track team for two years. “We’re striving a lot more towards winning and doing well as a team and looking good as a team.” Jacobsen has been running track for TJ throughout her four years of high school, and has seen many different styles of coaching. “I feel like he brings a new feel to the team. Before we weren’t as motivated or as dedicated to it, and he’s younger so it’s easier to relate to him and talk to him,” said Jacobsen.

Reed does his best to make sure his athletes feel good and are as dedicated to the sport as he is. “If you come out and you participate in my sport and you learn something from it and you grow, that’s what I want. I want kids to not just get stuck here, I want them to move forward,” explained Reed. He inspires his athletes to do their best every day and exceed their own expectations. “He is an inspiration; not only is he a great coach, but he is someone who has been the best in the world more than once and has made great accomplishments. He makes me feel as though I want to end up doing as well as he did and strive to be my best,” said junior Natalie Daniels.

Reed makes it a point to ensure that all his athletes know how much responsibility is required for them to be a part of his team. He gives athletes a necessary push forward in the right direction to make sure they continue to improve and he continues to guide them along the way, but it is ultimately up to the athlete as to how far they want to go. If runners are dedicated to the sport and put effort into it, Reed will support them and make sure they reach their goal. However, if an athlete is just there to be a part of a team, and does not put much effort in, Reed will put that responsibility on that athlete. “We really focus a lot on teaching technique and actually wanting and desiring to win instead of just coming out and being a part of something. I really try and teach [the athletes] to be a part of something that wins,” explained Reed.

Although he feels that an athlete needs to be fully dedicated to the sport, Reed also feels that a good relationship between runner and coach needs to be established. “If the coach has one plan and all the athletes see something else or they want something else then you’re just not gonna work. There’s no cohesion,” Reed described. He believes in having an open mind as a coach and being able to accept feedback and listen to what the athletes want as well as what the coach sees as best. “I love having him as a coach because even though he has us work very hard, he is a very amiable person who lets us have fun when the time calls for it,” said Daniels.

This year, Reed expects a very promising season. With the team continuing to grow and improve, and an established relationship between all the team members, he is pushing everyone to do their absolute best this season. “ I know I have an established direction of where I’m going; last year it was kind of, ‘let’s see what happens,’ but this year, I know who we have and I know where we’re going,” described Reed. With Reed to lead them, the TJ track team is sure to exceed all expectations this season.