Sticking Together On and Off the Field 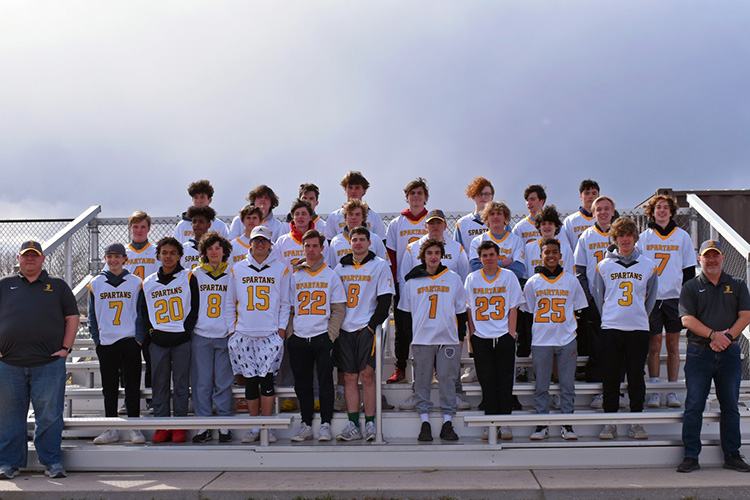 The Thomas Jefferson High School Boys’ Lacrosse has a six and five record. Their first win was against the Smoky Hill Buffaloes, and their most recent game on April 26th also ended in a win for the Spartans. However, these wins will certainly not be their last. They have played eleven games and fought long and hard in all of them, even if they lost. One of the starters, junior Keegan French, stated, “Last year we had a tie with five wins and five losses, but this year we are going to go back to a winning season.” These TJ Spartans are planning on being victorious with the help of the team’s four captains: juniors Zac Zabel and Eli Mallak, and seniors David Price and Jake Edwards.

With activities like team lunches and coordinating their outfits to match on game days, the team feels more bonded than ever, and everyone is looking forward to the rest of their season. French believes that the team has a better attitude this year and that this new mindset will carry them far into the season. French is excited to win more games and be with his teammates on and off the field. This kind of team relationship makes lacrosse an excellent way for a multitude of students to interact. Therefore, students can form an amazing bond with each on a team. Freshman player Miles Kahn added that “this season has helped [him] create a connection with the upperclassman that [he] wouldn’t have been able to create without being on the same team.” Khan also noted that this bond would help create a more successful season.

Though the team has great players, it also has great coaches. The head varsity coach, Jason Klimczak, and the assistant varsity coach, Sean Hofer, have coached together for many years. They have taught their players how to be good at lacrosse and win humbly and lose with dignity. Junior Owen Roberts said, “I am grateful for all our coaches have done for us; they have not only made me a better player, but also a better teammate and friend.”

Not only is the team feeling good mentally, but also looking good. The team will go into each game looking stylish with their new jerseys and helmets. The Spartans will not only beat their teams in goals, but also in looks.

If you would like to go see your Spartans in action, and in their new gear, you can support them at one of their upcoming games. Some exciting games are coming up, including senior night, where the team will need the help of a crowd to get things going on the field. With three away games and only one home game left, keep an eye out for any announcements on Spartan Edition for game times.