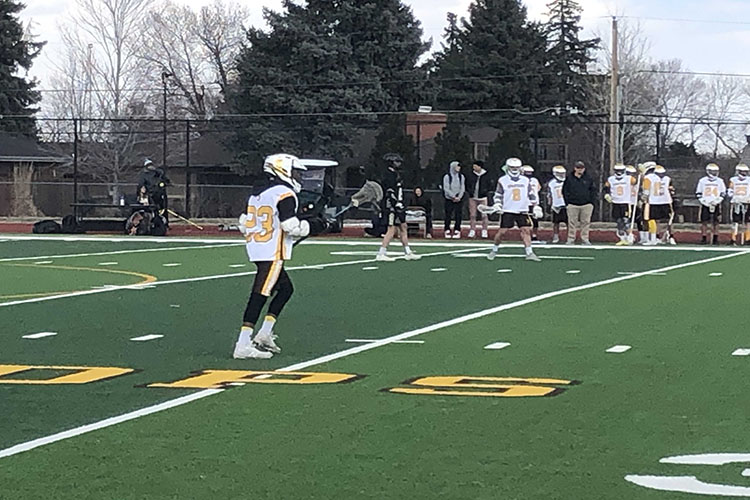 As spring sports wrap up, the Thomas Jefferson Boys’ Lacrosse team is finishing the season off strong.

Lacrosse season is in full swing and the Thomas Jefferson Boys’ Lacrosse team is quite impressive this year. Senior captains, Savion Johnson and Jackson Reid, and junior captains, Caden Cramer and Ian Bolack, are leading the team and setting a great example for the other players. With seasoned seniors and a fresh batch of eager underclassmen, the team is diverse in their skill set and are ready for any challenges thrown at them. Their record of 6-2 shows great potential for the rest of the season and beyond.

Led by head coach Jason Klimczak, who restarted the lacrosse program here at TJ five years ago, the team practices everyday after school, working to improve their stick skills and teamwork. After coaching boys lacrosse for a total of 11 years, Klimczak says he is excited about the diverse team they have this year. “The best part of coaching here at TJ is the kids obviously. I love the kind of kids we get who maybe do not start off as polished as many other programs from around the state but to see that growth from freshman to sophomore year all the way to senior year is the best part for me,” explained Klimczak.

The team hopes to have a good year and to possibly make it to the Conference Championship. They have already qualified for playoffs, but the coach and players are hopeful and believe they have a chance to go all the way. Building off of a strong senior class, the team is well rounded and has taken out rival schools left and right. For example, they started off their season with a win against South High School, 8-6, and had a midseason win against George Washington High School, 9-3. Varsity midfielder and senior Savion Johnson says: “I think we could get to the championship. We are looking really good. We have got a lot of underclassmen stepping it up and doing their thing so I think we can go far hopefully.” As with every team, injuries, grades, and prior commitments among team members cause a slight hindrance to their overall performance, but coaches and players assure that everyone makes the team a priority and players do their best to make it to every practice and game.

Obviously Klimczak also encourages the players to do their best and win some games, but more than that he wants the players to feel supported both on and off the field by him as well as their fellow teammates. He himself emphasizes that TJ comes first as players are always representing their school and their community, and then family comes next because they are a family and it is incredibly important to show up for each other. He says: “When we break down our huddles at every single game and every single practice, it is always TJ, family, and then going for a win.” They end it with “going for a win” in order to slide in a bit of confidence and ambition as they wrap up playing.

Lacrosse itself is an incredible sport that is fast paced and fun to play and watch. Above all it calls for teamwork and good communication which are essential skills all people need to learn. “Lacrosse is one of the least toxic sports environments… people are always trying to help each other” says Johnson. Seen as a combination of a lot of other sports like soccer and hockey, lacrosse is all about speed, contact, finesse, and above all – teamwork. A difficult sport to master but, an exciting one to watch, the lacrosse team at Thomas Jefferson exemplifies what it means to work hard as a team, so get out there and support your boys at a lacrosse game TJ!