Students Are On a Roll 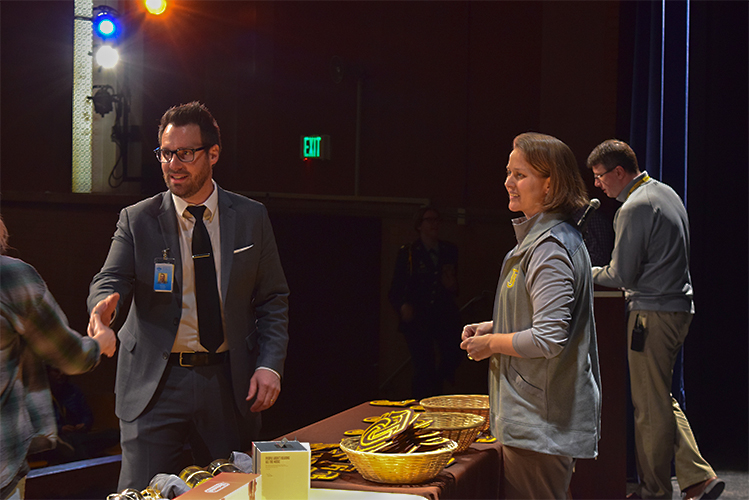 Students gather to celebrate their achievements and anxiously await the prize giveaway. photo by Andrew Villescas

New changes made to the biannual Honor Roll Assembly allow for a new way to reward students.

The Honor Roll Assembly is a longstanding tradition at Thomas Jefferson High School where students are celebrated for their academic achievements. Students are recognized for maintaining a 3.0 or higher GPA for the past semester, and anyone with a 3.5 or higher is given an academic letter. For years the assembly was structured with students separated into four categories based on GPA (Bronze, Silver, Gold, and Platinum), with Platinum students being recognized on the stage. Because the admin team cares about TJ students, they took constructive criticism regarding the event from students and staff and decided to act on that feedback.

On Wednesday, January 24, the new and improved Honor Roll Assembly was hosted during office hours to honor the 482 Spartans on the list. Attendance was voluntary so those who did not make Honor Roll were not required to come, and so that parents were able to attend to see their children being honored. Students were given tickets prior to the event and were separated into categories, and as they walked into the auditorium, they put their tickets into corresponding buckets that entered them into a raffle. Instead of recognizing each GPA category, students’ names were announced for achieving an academic letter. Afterwards, assistant principal Paula Hammel announced the raffle winners by pulling names out of each category’s bucket. Multiple students from each category were able to win Under Armour pullovers and water bottles, while one lucky student from each were able to win a pair of Beats headphones, a Nintendo Switch, and a flatscreen TV. With a chance to win prizes like these and the ability to celebrate each other’s hard work, students were more willing and more excited to attend the assembly. Principal Mike Christoff mentioned, “The Honor Roll Assembly is a fun way to recognize kids who do well academically, and we are so glad that students spoke up about what they wanted changed so we could cater to that.”

The Honor Roll Assembly serves to celebrate students who have excelled in their academics, and recognize their hard work. With input from faculty members and students about how the event should be improved, TJ’s administrative team worked hard to recreate the exciting and uplifting environment the Honor Roll Assembly established, to reward and acknowledge the hardworking students.