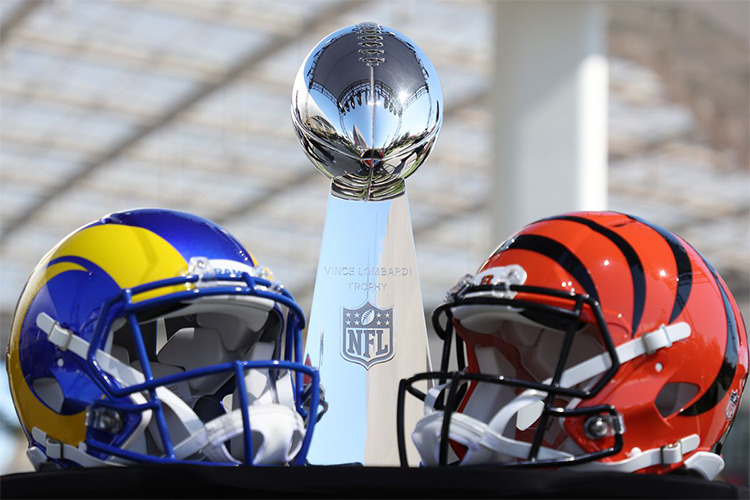 The Los Angeles Rams beat the Cincinnati Bengals by a score of 23 to 20 in Super Bowl 56. photo by Rob Carr

In a season of broken NFL records, it was only right for the Super Bowl to be one for the ages as well.

The Rams became a Super Bowl favorite the moment they traded for Matthew Stafford, the former first overall pick and quarterback (QB) for the Detroit Lions. Stafford was seen as the last piece needed to lead the Rams to the promised land. As if Stafford wasn’t enough, the Rams continued to make moves throughout the season, acquiring linebacker Von Miller from the Denver Broncos and wide receiver Odell Beckham Jr. from the Cleveland Browns. Thanks to the Rams’ star-studded roster, the team was a clear Super Bowl favorite over the course of the season and remained in the top five for Super Bowl odds every week of the season.

The Rams defense gave up only 17 passing touchdowns, which was the second least amount in the league and had the third most sacks at 50. Their star-studded secondary also tied for the third-most interceptions in the NFL with 19. However, it wasn’t the defense that made the most noise this season, but it was rather the newly acquired QB, Stafford, who put the Rams on top in nearly every NFL power ranking. Stafford did not disappoint in his first season with the Rams as he set single-season franchise records in completions (404), passing yards (4,886), and touchdowns (41). However, despite Stafford’s record-setting season, it was Rams wide receiver (WR) Cooper Kupp who got the most attention. Kupp finished the season having led the league in receiving yards (1,947), receptions (145), and receiving touchdowns (16), which was the only 4th triple crown season in NFL history. As a result of Kupp’s historic season, he won the Offensive Player of the Year Award, becoming the fourth Rams player to receive the award.

On the other hand, the Bengals started the season with 100-1 odds of making it to the Super Bowl, which put them behind all but three teams on the Super Bowl odds list to start the year. While the Rams played the role of being the favorite for the majority of the season, the Bengals were a dark horse team all season long and became the second-biggest preseason underdog to make it to the Super Bowl in NFL history. The Bengals underdog mentality led to nothing but success as the team had their first winning season in five years and won their first playoff game in over 30 years, breaking one of the longest playoff-win droughts in league history. The team’s success was largely due to QB Joe Burrow, a second-year who was the first overall pick in the 2020 NFL draft. Burrow’s rookie season was cut short due to an ACL, MCL tear in week eleven of the 2020-21 season, and many people expected the injury to hold Burrow back from ever reaching his once limitless potential. Despite this, Burrow exceeded expectations in his sophomore season, throwing for 34 touchdowns and 4,611 yards (both of which are franchise records) with a 70% completion rate. What’s even more impressive is that Burrow accomplished all of these statistics while also being the third most sacked QB in a single season in NFL history.

However, Burrow’s success did not come without a superstar supporting cast; it included rookie wide receiver Ja’Marr Chase who was also one of Burrow’s teammates in college. The pair made an incredible duo at Louisiana State University (LSU) and picked up right where they left off when they started their NFL careers, quickly becoming one of the most feared duos in the league. Burrow’s and Chase’s unmatched connection was apparent from the jump, and the two developed a knack for making big plays, resulting in the creation of the Bengals nickname: the “Big Play Bengals.” Chase even broke some records of his own, such as the record for most receiving yards by a rookie in a single season with 1,429 yards while also setting the Bengals’ franchise record for most receiving yards in a season.

As unexpected as this Super Bowl matchup was, both teams played to their strengths, which led to the closest score in a Super Bowl game since 2013. After a fairly uneventful first half, The “Big Play Bengals” lived up to their name as WR Tee Higgins caught a 75 yard touchdown on the first play of the third quarter, putting the Bengals up 17-13. On the very next play, the Bengals picked off Rams QB Stafford, setting up rookie kicker Evan McPherson for the 38-yard field goal. As the Bengals tried to hold onto their 20-13 lead, the Rams worked to come back and take home their first Super Bowl trophy since 2000.

Going into the fourth quarter, the Rams were able to cut the Bengals lead down to only four points. However, like the majority of the game, the fourth quarter became a defensive battle as the two teams continued to trade punts until the final six minutes of the game. Down by four points, the Rams needed a touchdown, so they put the ball in the hands of their offensive player of the year, Kupp, who scored the go-ahead touchdown that put the Rams up 23-20. Down by three points with just over a minute to play, the Bengals still had the opportunity to tie the game up. Although both teams played to their strengths, the Bengals’ biggest weakness was also put on display as Burrow was sacked a Super Bowl record-tying seven times. During the final play of the game, three-time defensive player of the year, Aaron Donald, burst through the line to wrap Burrow up, causing an incomplete pass and a win for the Rams.

Kupp, who scored the game-winning touchdown for the Rams, ended with eight receptions for 92 yards despite being double-teamed throughout most of the game. During a post game interview with ESPN, Cupp told reporters, “whatever is asked of me, whatever my job is gonna be, I just want to execute [it] to the best of my abilities,” and it was that mindset that led Kupp to his Super Bowl MVP performance.

After the game, Donald commented on the defense’s dominant performance in the same interview as Cupp, saying “you got to be relentless. [If] you want something bad enough, you’ve got to go get it.” On the other hand, Burrow told reporters that he was “disappointed in [his] performance overall,” despite being 22 of 33 for 263 yards and a touchdown. Burrow believes that losing the Super Bowl is “going to propel [the Bengals] into next year [because] we’re not satisfied with what we did this year.”