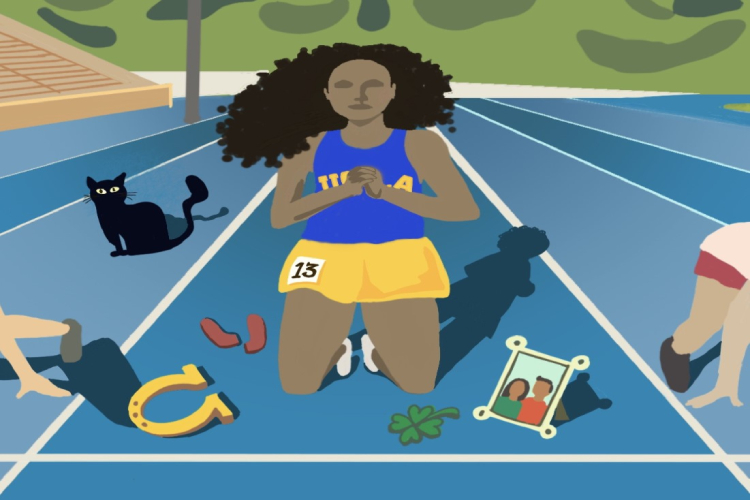 Many athletes have rituals or superstitions they complete before they perform. graphic courtesy of Daily Bruin

Many athletes believe that superstitions can enhance performance.

Tying your shoes a certain way, wearing your hair a certain way, or listening to specific music before a game – does it work? Superstitions is an irrational belief in supernatural connections that lead to certain outcomes.

This is more common than one might think, especially in sports. But why? Is it just a psychological thing that relieves anxiety and gives us just a little more control over a situation? As a society, and as human beings, we want to succeed and feel like we have control over a situation, with as little anxiety as possible. To me, that is exactly what being superstitious is all about: a feeling of confidence and control. That is why many people in the world are superstitious. According to the Medical News Today article, “How do superstitions affect our psychology and well-being?” 70% of U.S. students rely on good luck charms for better academic/athletic performance.

What makes people believe in superstitions? To get a better understanding, I interviewed my past volleyball club coach, Kaitlin Dennehy, who is extremely superstitious. Dennehy has been superstitious throughout her entire volleyball career, starting in middle school and continuing now as a coach. Her superstitions include wearing certain clothes, wearing her hair a certain way, and drinking red gatorade before playing in any volleyball game. Dennehy is completely confident in her superstitions, “They always work. If I don’t follow through with my superstitions, I already know the outcome and it won’t be good,” she stated.

When Dennehy coached my club team in our very first tournament, we lost every game and one of our starting setters broke her ankle in the second game. When asked about this tournament she said, “That was just awful, I never wore my hair down again and definitely never wore any of the clothes I was wearing that day to another tournament.” We may have not won that many games, but at least no one else broke a bone the rest of the season, and Dennehy swears it was because of her superstition. Dennehy has recently been coaching the Denver South High School JV volleyball team, and last year they went undefeated. Dennehy said it was “because every single game [she] coached from the bench and didn’t stand up, [they] won, and when [she] did stand up while coaching [they] lost the game.” Is this a coincidence or does this actually work?

When Dennehy sat on the bench and won every game, was it more about her superstitions or was it because she seemed more calm and wasn’t yelling at her team as much, so they played with more confidence? Could that be the basis behind every superstition?  Newton’s 3rd Law states that “for every action there is an equal and opposite reaction.” The action of a superstition before a game could give the reaction of confidence throughout the game. That confidence could then radiate to your teammates or players and create a domino effect of confidence which then causes  good playing. According to Medical News Today in the same article discussed above, superstitions have “evolved” to produce “a false sense of having control over outer conditions,” and reduce anxiety. This is also why superstitions are “prevalent in conditions of absence of confidence, insecurity, fear, and threat.”

Sports superstitions are the strangest, yet most common. Almost every athlete has a superstition or a ritual. One of my teammates on TJ varsity volleyball, Eliana Channel, has a ritual before every game, and our whole team knows not to mess with it. She goes into her zone about 10 minutes before the game and shuts everyone out while listening to her pump up music, as it gives her a sense of calm before the game. Superstitions or rituals can be simple, as long as it gives the same sense of control and confidence. I know some people don’t believe in superstitions and they see it as a ridiculous or silly belief, but I think they can have positive outcomes and make us more confident and better people, especially in sports. I don’t see any reason not to believe in superstitions. If it works it works.