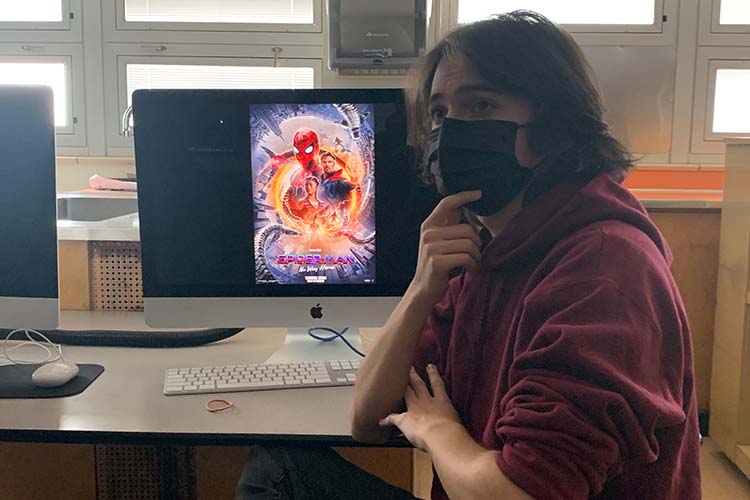 A lost child thinking about how awesome Spider-Man looks. photo by Nicolas Neuhalfen

The latest rendition of Spider-Man has Peter Parker’s life turned upside down.

Spider-Man: No Way Home blows the mind of old and new fans of the character. With the introduction of a multiverse, previous iterations of Spider-Man and Spider-Villains return to the big screen to reprise their roles for a heartfelt reunion. From inside jokes to heartbreaking realities, fans are put on a once-in-a-lifetime ride alongside the web-slinger. With the world finally knowing Spider-Man’s true identity, Peter Parker discovers what it truly takes to be Spider-Man.

Besides major cameos from previous iterations, the movie tackles the theme of growing up in so many different ways. The idea of change is heavily implied in every key moment of the film – the most obvious change being Peter Parker’s two separate lives colliding and the most subtle change being the growing stakes of responsibility. Doing what is right has always caused setbacks in his life, but each time the whiplash from it all becomes more prominent. The pattern of his good deeds punishing him hits an all time high with the death of his Aunt May and the realization of what is at stake when he steps on the mantle. “With great power comes great responsibility,” says Aunt May as she passes away. The tragic scene follows the ultimate change in one’s life and the harsh reality that you can never go back to how things were, showing that growing up means accepting the change that comes along with it.

Throughout the film, the message of setting expectations low engulfs Peter Parker as his duties of being a vigilante are surrounded with controversy. “If you expect disappointment, you can never really get disappointed.” His girlfriend, MJ, first says this to accept the possibility of not being accepted into college but it can be seen taking a toll on Peter. The line perfectly sets up the tragic fate of Peter Parker, which quite literally makes him have no way home. His sacrifice to correct his mistake has all his loved ones forgetting who he is and even the things they have said to him. One of the last scenes in the film has Peter Parker quoting MJ in front of her, which sets in the reality that he is the only one who remembers. Although it is heartbreaking to see him accept his fate of being alone, he takes it with a smile, knowing that his loved ones will be safer without him around.

The film heavily beats down Peter Parker this time around, but it does so in order to set up his origin story in the Marvel Cinematic Universe. Previous takes on Spider-Man have always included the tragic death of Uncle Ben, but a new take was put forth, and it works with what they have got. There is no telling what is in the future for Peter Parker, as he no longer really exists, but he is set up to just be a friendly neighborhood Spider-Man once again. A fresh start on the character can really help go more in-depth with him and finally let the kid grow into his own person, more so than he did in this film. My second time around watching the movie made me realize that it is more than the nostalgia part that makes the movie great, it is the willingness to sacrifice everything that was built up. The bittersweet ending is the best ending that this version of Peter Parker could have had.