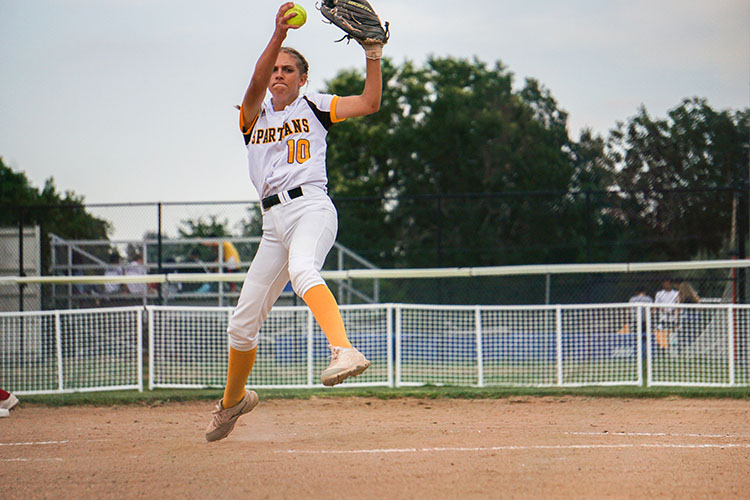 Girls’ softball overcame a challenging season and has hope for their future seasons.

This fall, the Thomas Jefferson Girls’ Softball team spent their season rebuilding after losing two seniors last year. Although this season was not their most successful, the team still made positive strides and made it memorable. The team spent the fall adjusting to a new coaching staff: Alex Alcala and Lisa Kelley.  World Language teacher Kyler Jackson used to be head coach but retired from coaching after many years. Despite a season of transition, many Spartans stood out and won impressive awards.

This year, the girls had a nearly brand new team with only four returning varsity players and a new coaching staff. Head coach Kelley has been coaching softball for over 20 years. She chose to take a break from travel teams to start her coaching career at TJ. She hopes to create a more local understanding and the game and increase the level of play in the community. With every team, building an almost entirely new program requires patience and an immense amount of effort. “All I can say, new coaching staff, new program, and players that had to adjust to a new program of softball.  Hopefully, next year is easier and more adjustments are made, so we are all on the same page of the new program and we progress faster than this past season,” stated Kelley.

The girls were able to improve this season despite having an almost entirely new team. “It was difficult because we had only a couple of girls returning from varsity and our JV had become our varsity, but we had to get everyone to the same level of playing,” explained captain Alice Larm. “Some individuals progressed a lot faster because they worked hard.”  New sophomore team member Eliana Luna was able to join the team as one of the handful of athletes who had previous experience playing softball before high school. “Having to completely rebuild the team meant we had to start with a group of girls who were all new to the sport so that made it a little difficult.”

Despite the setbacks that the girls faced, the team was still able to finish the season with distinguished recognitions from both Denver Public Schools and the TJ coaching staff. Senior Tori Gardner finished her season by receiving the All-City 1st League award and the TJ Softball MVP award. Juniors Larm and Grace Stelzer received the All-City honorable mention award and Larm earned the TJ Spirit Award. Freshmen Juliana Willson and Morgan O’Keefe  hold promising futures for the TJ softball program by achieving Most Improved and Rookie of the Year from the coaching staff.

This season presented challenges with the fairly new team, but the growth on and off the field was able to represent exactly how a team undergoes the transition of a rebuilding season. The outcome of this season didn’t discourage their level of participation. This season allowed for the girls to create new memorable bonds with their teammates and they are still eager for their upcoming fall season.