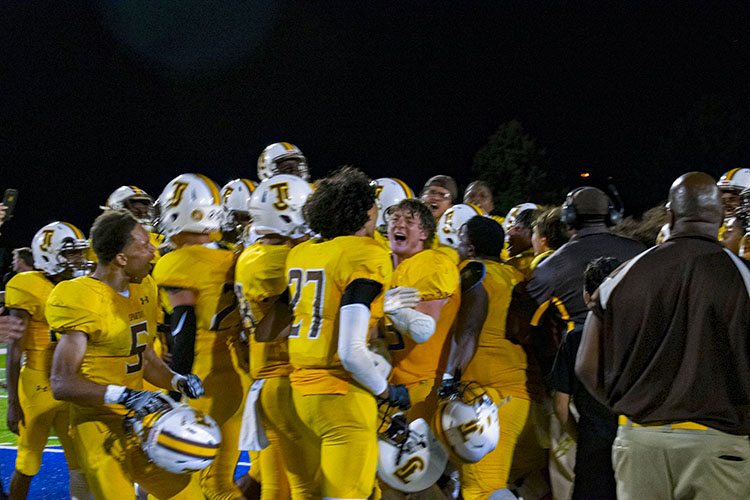 The football team celebrated an end to a great season. photo by AJ Domagala

TJ’s football team ends the 2019 season on a high note as the Spartans make the playoffs.

This 2019 season, TJ’s football team ended with a league record of 3-2, and an overall record of 7-4. The team fought extremely hard this season under the direction of new head coach, Mike Griebel. The team presented a great example of teamwork throughout the season, and the team’s 19 seniors provided amazing leadership. The team was the only Denver Public School out of all divisions to make not only the playoffs but also make it into the second round. During the season, the team defeated rival schools like Denver South, and had three shutouts against Northfield: 40-0, Thompson Valley: 40-0, and Littleton: 46-0.

The football team did remarkably well this season beginning on a blank slate, as Griebel began his first of hopefully many years coaching here at TJ. Senior Drea Thompson expressed, “It was a good change. Having a new coaching staff was a little scary at first, but the outcome was pretty good. They’re all great people.” Despite the sudden change, the team was able to grow a successful relationship between not only the coaches but with their fellow teammates. Starting fresh can sometimes lead to some problems on the field as confusion and frustration can overcome the emotions of leadership and brotherhood. This is why senior captain Keshaun Taylor’s role as the “hype man” was so important to lead the team. “My role on the team was to let everyone know that we’re better than these guys, and we can do better ourselves. I was the hype man so that was really what I brought,” explained Taylor. Football has the incredible ability to bring all teammates together and it really shows the importance of good attitudes. Junior quarterback Trenton Koser believes that everyone stepped up and put in their best effort. “Our biggest accomplishment was our fight and determination at the end of the season, and we fought all the way to the end,” described Koser.

As a team, the players were able to come closer together and make the playoffs for the second year in a row, while fighting hard during their last game against Frederick High School. Even with the final outcome of the season, junior captain Avery Shunneson talked about the season in high spirits. “It was a really fun season. Having new coaches and new styles of plays is hard to figure out in just one year, but I think everyone did a really good job.” This season will be one to remember for the Thomas Jefferson Spartans. “Although the team will be losing 19 seniors after this season, but the 37 other players that include juniors, sophomores, and freshmen are eager to fill in captain positions and lead the team next year through another amazing season.