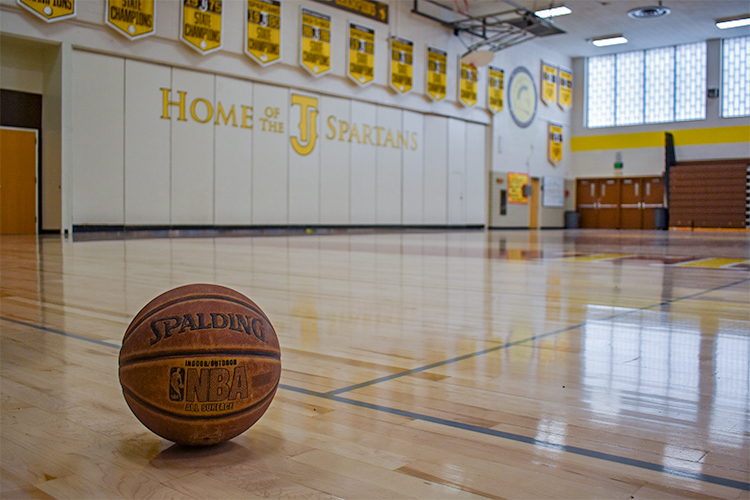 Sports like basketball offer so much more than just athletic skills. photo by Logan Cecil

Team sports have been the single most influential activity in my life and I cannot speak higher of the benefits they offer.

I started playing basketball when I was in third grade, learning the ropes alongside the classmates with whom I spent my younger years in life. In the first year that I played, I had no passion for the sport, only a desire to spend time with my friends. That is not to say that I did not try, despite my total points scored for the year over the course of roughly twelve games being a whopping two, both off of separate trips to the free throw line. That summer, my older brother began playing for a club team, and while I dreaded accompanying my family to the numerous tournaments he played in, I did learn a lot about how the game worked. During time-outs and half-time I would run onto the floor to get some shots up, completely unaware of the crowd that would watch as I airballed from two feet and dribbled off of my foot. And all of that time in the gym amounted to me breaking double digits in total points scored the next year, but not by much.

I write this article after playing basketball for ten years, not to rave about the game itself, but to describe the influence that it had over me as I developed into the person I am today. Looking back on the many lessons and skills that have I learned growing up, I can attribute a fair number of them to basketball: teamwork, communication, resilience, ambition, etc.. And while the length of my career on the court is now unknown, I can assuredly say that the years of blood, sweat, and tears I put into this beautiful game were not for naught.

Going into middle school, everyone is a mess in their own, unique way. My struggle was trying to fit in with my classmates and friends despite appearing much older due to my height. I definitely liked being tall, but catching glares from adults for simply playing with other kids my age weighed heavy on my mind. This weight manifested in a timidity that led me towards further isolation. As I sat out of physical activities, I lost out on a connection to the people with whom I was friends. When I started playing basketball however, I felt at home. It did not matter that I was taller than everyone else, in fact I was envied for my height. Even if I was not any good, I began to gain a confidence that I could command when I was on the floor. The confidence I gained did not immediately change who I was, but it gave me a taste of what I could be, and I wanted this change more than anything.

I spent countless hours in my backyard, at my brother’s practices, and at recreation centers working on my game. I might not have been practicing anything necessarily correct, fundamentally, but I felt like I was good at something physical for once. I remember running up to my dad excitedly telling him about how I could properly take two steps before a layup and not travel at Montclair Recreation Center. I remember long days on my back porch throwing up circus shots and beating my brothers in one-on-one games. But more than anything, I remember how much I enjoyed being loud and confident: I wanted to show off and figured the way to do this was by playing for a club team.

The memories I made while playing for club teams will stick with me for the rest of my life. When I started, the only thing I had going for me was my height. I could not finish, run, or jump extraordinarily well and I had to deal with this frustration. There were plenty of times where I wanted to give up, where I figured I was not good enough to keep playing, but my passion for the people supporting me (my parents, coaches, and teammates) pushed me to keep grinding. I began to see progress, vividly recalling the first time I executed a euro step in game and seeing my coach jump out of his chair in excitement. The resilience I developed prepared me for difficulties I would face on and off the court as I went into high school and beyond.

Now as I move on to college and venture into adulthood, I reflect on the many memories that I made throughout my childhood. I can honestly say that I have nothing but positives to attest to my times playing sports. Sure, there were times where I wanted to quit and times where I resented the fact that I had made a commitment to my team, but the times where I was in love with the sport and enjoying every minute I spent with my friends far outweighed the bad. In college, I will try to play, whether it be at a higher level or intramural, so that I can carry this passion through to my adulthood. There is really only praise that I can afford to team sports and I hope that everyone has a chance to experience the joy that I felt throughout my youth.