The Art of the Red Panda 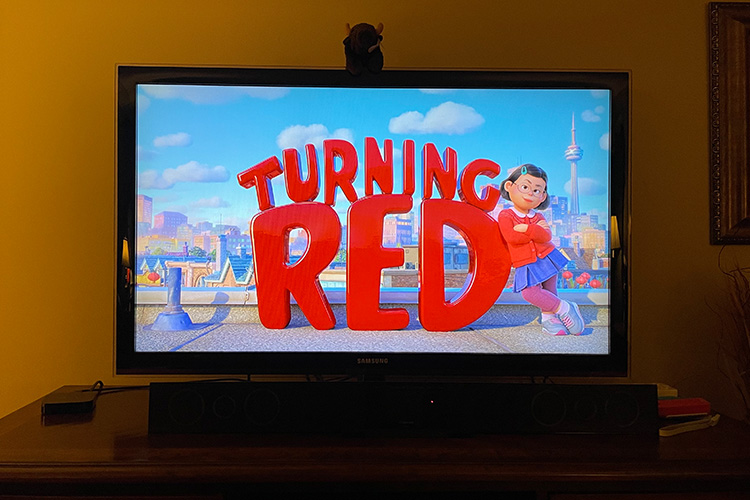 An in-home viewing of Turning Red featuring the title of the film with the confident main character Meilin Lee in front of her home city of Toronto, Canada. photo by Addison Smith

The coming of age film released by Disney and Pixar sets a new standard for future children’s movies as it discusses the struggles of adolescence and family.

Turning Red follows the story of a dorky yet confident thirteen year old, Meilin Lee, who gets stuck with the family curse of turning into a red panda. The slightly awkward movie creates a heartwarming effect as the film shows what it is like to be a teenage girl growing into her body at such an agonizing stage of life. Not only does the film bring light to topics that are usually pushed to the side, such as hormones and menstruation, but Pixar provides a lot of representation to the screen for many cultures. These topics discussed in the movie are what make Turning Red unique in the way that it shows younger audiences ideas that were for a long time seen as inappropriate or stigmatized.

The movie starts out by introducing Meilin Lee who explains to the audience how important honoring her family is while claiming she is also taking care of herself as a teen. Taking place in 2002 in the city of Toronto, Canada, Meilin is tasked to handle the responsibilities of school, family, and growing up all at the same time. She is quick to introduce her friends, Miriam, Priya, and Abby, who play a key role in helping Mei while capturing the awkwardness of adolescence. From being obsessed with guys and boy bands to saying cringey phrases, the four friends are a great representation of the weird stages of middle school life. Skip to her family duties, Mei’s close relationship with her mother and her family temple duties all start to pile up once a difference between family life and personal interests cross paths. After an embarrassing incident, Mei is hit by the generational curse of the red panda. The movie continues with many challenges regarding friends, family, and important issues in a young girl’s life, all while using the panda as a metaphor for puberty.

Garnering 94% from Rotten Tomatoes and 73% appeal from the audience, Turning Red is said to be “heartwarming, humorous, beautifully animated, and culturally expansive” from many critics. However, due to the topics discussed in the movie such as menstruation and many aspects of puberty, some parents had a hard time accepting the movie. But these suggested messages that are usually kept under wraps are important to be discussed because of the fact that every girl around the world goes through the same experience that Mei goes through. The only difference is they handle mood swings and menstruation without turning into a red panda. These angry, sad, or excited mood swings that are experienced throughout teens’ hormonal stages are smartly represented by Mei’s red panda, and her acceptance of the panda highlights that she is no different from the rest of the teens around her. Although in the film Mei’s mother outright mentions menstruation and even brings out pads to give to Mei, the movie rather uses Mei’s red panda as a way to show how big of an impact puberty has on teens overall. The strong emotions felt by her animal side is how young girls often feel during puberty, and the panda is a great way for film companies to show these important topics.

Not only is the panda used in the movie to represent puberty in teens but also is used to connect back to the Lee’s family “curse.” The Lee family’s ancestors were given the power of the red panda, but as the family progressed into modern times, the panda soon became more of a curse rather than the blessing it was in the beginning. This resentment of the red panda quickly formed generational trauma towards Mei and her mother, Ming Lee. An incident involving Ming and her mother, Mei’s grandmother, created a rift between both Ming’s panda and her mother. As a result, Ming overbears Mei when it comes to her family and due to the relationship with her own mother, Mei severs herself from her mother just like Ming did with hers. Towards the end of the movie the generational trauma becomes very apparent, and the solution to the family’s problems are not solved until the ladies of the Lee family accept their faults and come together.

This heartfelt ending helps turn the awkward and goofy movie about teens finding their way into a movie showing how adolescence plays heavily into family aspects. Families may have their traditions and beliefs but they are separate from each individual member, and in order to have a steady family, everyone must accept this. Turning Red does a great job of highlighting topics that are not mentioned often and connecting the emotional years of teens to the importance of family. This Pixar movie is sure to set a new standard for movies directed towards younger audiences while encouraging future films to discuss topics that have been previously turned away.