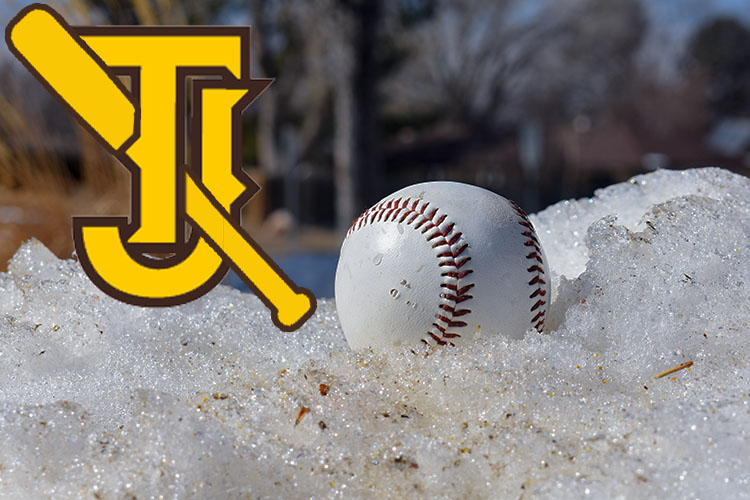 The spring snow may remain, but baseball season will be underway soon. photo by AJ Domagala

Baseball tryouts are swiftly approaching as the warmth of spring sets in, and possible future players are preparing for the tryouts that loom mere days away.

Spring sports have returned, bringing with them tryouts for Thomas Jefferson’s baseball team. Coaches find themselves pulling out the gear and dusting off the caps in anticipation for what is to come. Only a few weeks away, tryouts are scheduled for after school on March 2nd at 3:45 p.m. out on the baseball field. As in the past, Graham Baughn will continue to coach varsity, while Jacob Ogurek is in charge of the JV team. The warm, traditional nights of sitting on the bleachers are just around the corner, so be sure to stay updated on practice times and games.

In the dust of the field, competition is intimidating, with around 40 people competing for limited spots. The varsity team can fit a maximum of 15 players. However, the junior varsity size varies from year to year. Prior players must try out again for the 2020 season, one of them being last year’s Kyle Hrin. Now a sophomore, Hrin hopes to play another round on the varsity team. He’s been playing since he was little, and his twin brother, Tyler Hrin, also finds enjoyment in the sport, as they both played together during last year’s season. Kyle details the enjoyment the game brings, particularly finding the role of batter the most exciting. “People should definitely come to the games. We’re a really good team and we’re going to win a lot this year,” he commented. With a new set of players and the guidance of coaches, both JV and varsity are sure to score big this season.

Though the 2019 year could have been better, the three previous seasons were a hit. With the team having made the playoffs in both 2016 and 2018, and going to the State Tournament in 2017, everybody is hoping the same streak will start up again this year. “I’m optimistic, but we have a lot of work to do. We lost four seniors that had a great impact on our program, so we need to find players to step up and provide leadership,” Baughn commented. He’s been coaching for the past ten years, and this is his sixth year at TJ. “When I couldn’t play anymore, I thought I could use what I’ve learned to help kids achieve their goals. It’s very rewarding when someone I’ve been working with improves and it ‘clicks’ for them.”

Before going to practice, make sure to register and pick up a golden ticket. Without it, any students interested in spring sports will not be able to participate. For anyone who wants to build their baseball skills before tryouts, workouts are available to attend, which will occur every Saturday at 8 a.m. at Legends baseball facility, and on Tuesdays and Thursdays at TJ’s field at 3:45 (if the weather permits). However, once the season officially starts, practice will be Monday through Friday 3:45 – 5:45 p.m. Players will also occasionally practice on Saturdays.

Baseball season will wrap up in May, so make sure to attend as many games as possible and cheer on TJ’s 2020 team. For more information or clarification on a topic, contact Baughn at graham.baughn@gmail.com.