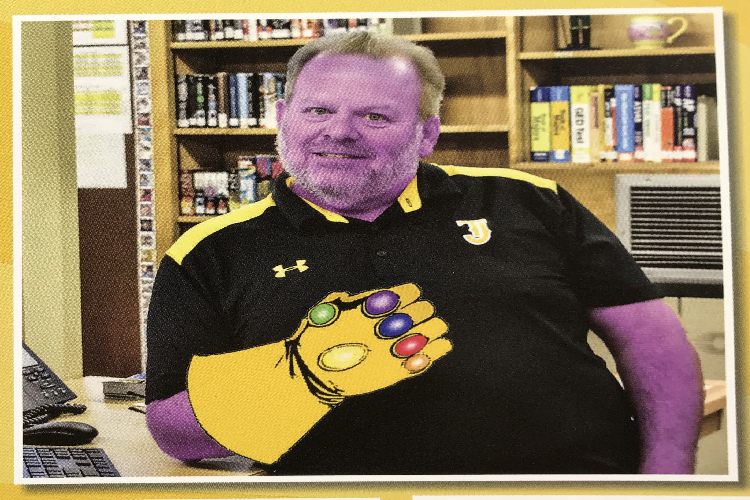 Mark Fabian has been a part of TJ's culture for years now. photo courtesy of Mark Fabian

TJ’s librarian shares some of his thoughts about students and remote learning.

With each passing day, Thomas Jefferson High School’s staff and students are brought further away from a time where we could all be together. One by one, faces turn to icons and the connections we once had turn to distant memories. This is why it is important to recognize the people who have made the lives of students so amazing. Supporting TJ’s students is the school’s very own Mark Fabian.

Fabian has worked at TJ for the past seven years and is currently the school’s librarian. Prior to being the librarian, Fabian worked in the school’s Special Education department. However, Fabian’s connection to TJ has spanned longer than the time he has worked there, as his two sons both attended TJ and graduated in 2012 and 2013. Most of the students who attend TJ know who Fabian is, as his reputation of being outgoing and personable precedes him. If there is one thing to know about him, it is that he has the utmost admiration for the students of TJ. When asked what he missed most about being in the library, Fabian responded without hesitation, “the students,” then proceeded by mentioning, “It’s corny to say, but I really do love the students.” Fabian spoke fondly of the role that students have had in his life. He mentioned that he has been a part of some students’ lives even beyond high school, as he has been invited to events like quinceañeras and birthdays. Fabian explained that “when [he gets] invited, [he makes] every effort to attend.” Fabian spoke to the fact that he missed creating these types of relationships, the ones that will go beyond high school. However, he also mentioned that the freshman class will not get the same opportunity to know who he is. “They won’t know me as that sarcastic person that they can actually come and seek help from,” he remarked.

Beyond this however, Fabian has found that being a librarian is a difficult task when you have no library. At the beginning of this school year, Fabian would open Google Meets every morning and would keep them open for the duration of the school day, but seeing as the familiar physical space of the library was missing, not many students showed up. Throughout the semester, Fabian has found that the best way for him to operate in this setting is to let the students reach out via email.

In his life outside of being TJ’s librarian, Fabian finds himself spending time with his wife and two sons. Over this past Thanksgiving, Fabian’s sons returned home to eat their Thanksgiving meal after they made sure they were all healthy. Fabian described that every Sunday is family day and that they watch football as he barbecues. Fabian let on that he raised two sons who continue to tease him quite a bit when they get together. When asked about his favorite sports teams, Fabian obviously suggested that he liked all of Colorado’s teams and goes to the games that he can, but he emphasized that he really roots against the Boston and Los Angeles teams which, as he pointed out, are always annoyingly good teams. Fabian has recently deleted all social media apps after watching the Social Dilemma; however, he finds that podcasts are more enjoyable anyway. Joe Rogan’s podcasts are specifically interesting to Fabian, so he makes sure to listen to them when he can.

So, make sure to reach out to Fabian if some familiarity of a time when students could all be in the library sounds appealing, because as anyone who has visited the library knows, the essence of the library did not come from the books on the shelves or the desks where you could work; it came from Fabian, TJ’s librarian and friend.