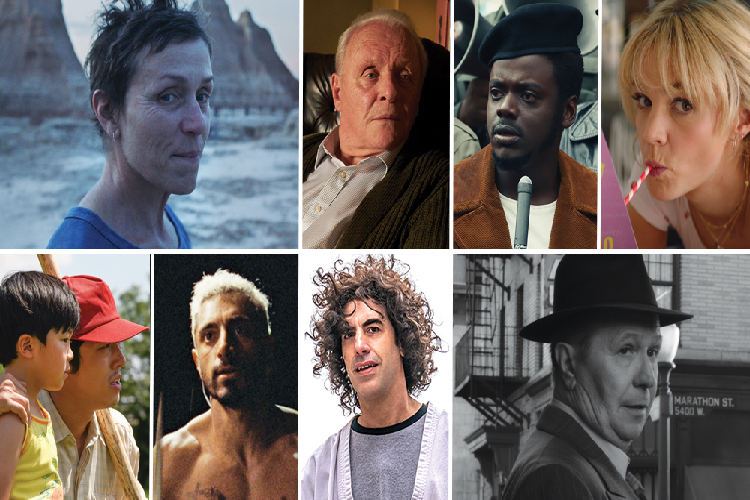 Screengrabs from each film nominated for the Best Picture Award, courtesy of Variety Magazine.

Opinion and statistics combine to try to explain the possible winners of the Oscars Best Picture award.

The Oscars are a monumental award show for the film industry. This year, they have been pushed back because of COVID-19; the show is coming to us in 2021 with a fantastic lineup for the Best Picture nominees. This includes the films Sound of Metal, Judas and the Black Messiah, Mank, The Father, Minari, Promising Young Woman, The Trial of the Chicago 7, and Nomadland. All of these films deserve their spot in this award show, whether they are about a musician trying to deal with going deaf or a woman taking revenge into her own hands. This year’s Best Picture award has been considered up in the air; however, based upon previous winners, the reviews of each film, and a hint of opinion, we can deduce the possible winner.

Let’s begin with the track record of previous winners. It can be assumed that the winner of the Best Picture award would also be nominated for Best Director based upon pattern. Sadly, this puts The Father, Sound of Metal, Judas and the Black Messiah, and The Trial of the Chicago 7 at the back of the race. Does this mean that these movies do not have a chance at winning? Hopefully not, because that would indeed be a shame. Mainly looking at the directing of Sound of Metal and Judas and the Black Messiah, in Sound of Metal, notable storytelling makes one feel as if they are immersed in the world of Ruben Stone and his struggles. Judas and the Black Messiah had stunning cinematography that kept the audience engaged, and the connection the actors had with Shaka King made the acting performance top tier. Continuing with the patterns of previous winners, Minari, whose intimacy with the audience has been compared to the 2017 best picture winner Moonlight, could also be considered to be docked due to its lack of an editing nomination. Only one winner of the best picture in the past 40 years was not nominated for editing. However, these trends can be broken, so none of these films should be eliminated yet.

Something else to consider is the ratings of each film and how many nominations they have in the Academy Awards. For ratings, I will be focusing on Rotten Tomatoes, considering that it is one of the most well-known movie critics. Looking at the Rotten Tomato rating for each of these films is probably the least effective way to infer which nominee will win. However, based upon these ratings, the top three out of the eight are The Father, Minari, and Judas and the Black Messiah, with The Father and Minari tying for first, each with a 98% rating. We will also take into consideration the number of nominations each film has. Sound of Metal holds six different nominations from the Academy, which is the highest out of any of the other nominees. Based upon awards won, Nomadland seems to be in the lead, and most predictions have placed it within their top three.

With these eight films, the winner for this award is up in the air. The few things that could predict which will win can be just conjecture, and movies can break trends. Every single one of these films has a unique reason to win the best picture, but, based upon opinion and statistics, Minari and Nomadland seem to be the strongest contenders.