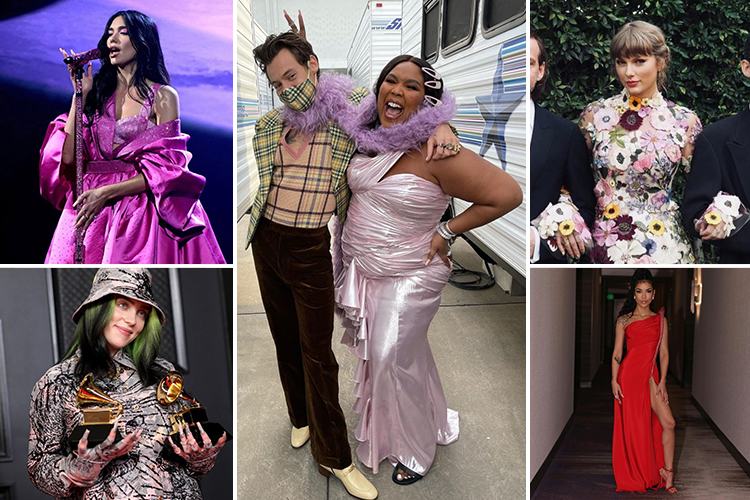 Many celebrities came together in the worst and best fashion for the 63rd Grammy Awards.

With COVID-19 affecting the 63rd Grammys of 2021 in almost every way, it was important for celebrities to step up their game with their outfits and make that element feel a little bit normal, yet not all of them delivered on this concept.

Lizzo, a three-time Grammy winner, disappointed many with her dress choice, as it did not compare to her attire at the 2020 Grammys. One of Lizzo’s 2021 red carpet outfits was a Balmain strapless and ruched seafoam green dress with a sweetheart neckline that fell above the knees, which was very underwhelming. Although the color was stunning, the detail and the length of the dress, along with the accessories, felt very unsophisticated—I felt like her dress and accessories were something you would find at a mall. It seemed as if something was missing; this dress did not embody who Lizzo is, although she was very happy with her dress.

Gucci dressed 19-year-old and seven-time Grammy winner Billie Eilish, and there was no surprise when it came to the style of her attire. She is known to wear baggy, non-form fitting clothes due to personal style and preventing comments about her body. Eilish makes loose clothing look professional, as seen at the 2021 Grammys. Eilish was dressed head to toe in a pink, black, and silver Gucci set, including a matching mask, hat, and nails. Although this outfit was very classy and professional, the colors were a surprise, as Eilish typically wears neon green and black, as seen at the 2020 Grammy awards, but it was not my favorite outfit of hers.

One person who had many outfit changes during the award show was Dua Lipa, who is also a three-time grammy winner. Dua Lipa had four outfits, each one being sparklier and pinker than the previous. Lipa started by wearing her custom Versace gown at the red carpet, which had sheer and sparkle detailing, with a pink and blue butterfly shape on the torso, in addition to cut outs on each hip. Lipa continued the night by performing while wearing a hot pink ball gown with sparkle detailing. She then had a quick outfit change and reappeared on stage in a light pink blazer covered in sparkles and glitter, with matching pink boots, followed by her last outfit of the night, a swimsuit-like set following the theme of being light pink and covered in glitter with dark pink detailing. Although the pinks and the sparkles are enough to make anyone love her outfit, it was not as unique of some of the other guests.

Harry Styles, known for being in the band One Direction and wearing more feminine clothes to break toxic masculinity stereotypes, also disappointed me this year. His performance outfit was simple; it was an open leather blazer with matching leather pants and a green boa. I liked this way more than his red carpet outfit. This included a yellow, plaid blazer, a pink and tan sweater vest, brown flare pants, and a purple boa. None of this was cohesive, and none of it was appealing. I was surprised when I saw this outfit because Styles typically dresses amazing, but apparently not this year.

Jhené Aiko, a nominee for three Grammy awards, wore a huge Monsoori pink, layered, and ruffled gown. This gown was my favorite of the night; it was unique but not too unique for a simple awards event like the Grammys. I have always been a pink girl and a ball gown girl, so this combination was enough to make me fall in love.

Taylor Swift left the Grammys with the award for Album of the Year, and she came into it wearing the most amazing and beautiful Oscar de la Renta mini dress. This dress was covered in embroidered flowers, which is perfect for the spring season coming up. Swift’s dress will be available for sale, with pre-order coming in late 2021. If I had $9,000 laying around, I would rush to purchase it, but unfortunately, I am not even close.

When it comes to ranking Grammys attire, Swift and Aiko are tied for first in my opinion. The design of Swift’s mini dress and the color and dimension of Aiko’s are what puts them at the top of my list. Both Lizzo and Styles are ranked last, because of the unprofessionalism of both outfits. Lipa and Eilish came close to being up with Swift and Aiko, but they did not wow me enough. I was and still am disappointed in some celebrities because their outfits were not up to standards they have met before, and for that, some are not even worth mentioning.