The History Behind the Holiday Season 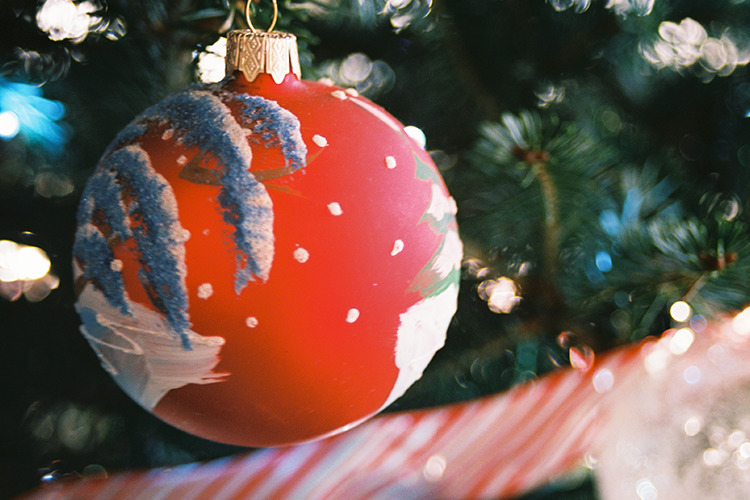 An ornament hangs on a Christmas tree, a holiday tradition practiced by many families across America. photo by Ben Morlan

Why do we have so many festivities at the end of the calendar year?

In the United States, the “Holiday Season” is generally considered to begin in late November, the day after Thanksgiving, and ends in early January, after New Year’s Day. In modern culture, it includes the holidays of Hanukkah, Christmas, Kwanzaa, and New Year’s Eve. Some even consider it to begin on October 31st to incorporate Halloween and Thanksgiving. The traditions of gift-giving, decorating trees, sending holiday cards, and monetary spending during the season also cannot be overlooked.

Christians began to adopt celebrations for Christmas that mimicked the joyful, even boisterous traditions celebrated by pagan tribes. In the Roman Empire, Christians extended seasonal gift-giving, which was popular for Saturnalia (a holiday celebrated from December 17th to the 23rd in honor of the god of Saturn) to Christmas day. However, some medieval Christians objected to these celebrations, arguing that Christmas should be a somber religious day, not a festival. In the American colonies, Puritans, Baptists, Quakers, and Presbyterians opposed festivities, while Catholics, Anglicans, Dutch Reformed, and Lutherans approved.

After the American Revolution, English customs, including Christmas, fell out of favor in the United States and did not regain popularity until the early 19th century, but instead of the raucous carnival holiday that Europeans enjoyed, Americans re-invented it into a family-centered day of peaceful co-existence and nostalgia of past holidays and happier times. This renewed interest in the holiday came during a period of class conflict, poverty, and turmoil in the U.S,  when unemployment was high and gang rioting would often occur during the season.

Santa Claus, considered the mascot of the Christmas holiday, came to exist in a poem written by Episcopal minister Clement Clark Moore in 1823, An Account of a Visit from St. Nicholas, which is better known by its first line, “‘Twas The Night Before Christmas.” The story depicts the Santa Claus character as a jolly man who delivers toys to children in a sleigh driven by reindeer. The story was based on Turkish-born monk St. Nicholas, who wandered the countryside in the third century, helping the poor and sick. 20 years later in 1843, English author Charles Dickens wrote the classic holiday tale, A Christmas Carol, which emphasized the importance of charity and goodwill towards everyone. Families were also becoming less disciplined and more sensitive to the emotions of their children in the early 19th century. For them, Christmas was a holiday where they could lavish their children with gifts and attention without appearing to spoil them.

The renewed interest in Christmas only intensified throughout the late 19th and 20th centuries. Following the Civil War, there was an increasing desire among Americans for national unity, and the holidays were seen as an appropriate method. On June 26th, 1870, Christmas was declared a national holiday. Eleven years later, in 1881, the iconic version of Santa Claus was illustrated by political cartoonist, Thomas Nast, who drew, based on Moore’s poem, a jolly, fat man in a red jacket with a white beard and a sack of toys.

In the 20th century, modern holiday marketing campaigns began when companies realized that they could very easily profit from the holiday season by latching on to the nostalgia and joy promoted throughout November and December. Construction workers started the Rockefeller Center Christmas tree tradition in 1931. That same year, Coca-Cola began placing the Santa Claus character into their ads in popular magazines, successfully marketing their beverage as a perfect holiday gift. In 1939, copywriter Robert L. May wrote a poem about Rudolph, the underdog of the 9 reindeer that pull Santa’s sleigh, to help draw customers into the Montgomery Ward department store.

The holidays also began to make their way into American media. Many of the first holiday songs were originally made from the 1930s to the 1960s. In 1934, Fred Coots and Haven Gillespie, songwriters for the American Society of Composers, Authors and Publishers (ASCAP), produced one of the first modern holiday classics, Santa Claus Is Coming to Town. Dozens of other holiday songs, which became ingrained in American holiday culture, were produced, covered, and re-mastered in the subsequent decades. Nevertheless, the ASCAP has found that Santa Claus is Coming to Town continues to be the most played holiday song of the last 50 years.

The only practical way to view most visual media in the 1940s and 50s was in theaters. As Hollywood films were beginning to impact American society, Bing Crosby helped popularize holiday themes in films such as Holiday Inn (1942) and White Christmas (1953). In the 1960s and 70s, the rise of broadcast television led to the creation of animated holiday specials, which appealed to children, especially since industries realized that they could have a significant influence on their parents’ buying decisions. From the 1980s to the 2000s, VHS tapes and DVDs allowed for more films to be made and distributed, allowing for higher budgets and higher profits. Some popular features that took advantage of the widely available mediums were Scrooged (1988), Christmas Vacation (1989), Home Alone (1990), How the Grinch Stole Christmas (2000), Elf (2003), and The Polar Express (2004). From the 2010s and onward, every media company has become involved in the streaming business, acquiring the rights to old films while making their own.

In recent years, classic songs, movies, and past holiday traditions are expertly used by marketing campaigns to put customers into a festive mood. When customers are happy, they are more inclined to make a purchase. The Macy’s Thanksgiving Day Parade, for instance, is a two-hour parade in New York City that features balloons of famous pop-culture icons, such as cartoon characters, live music performances, and mascots for companies. It ends in front of Macy’s Herald Square, the company’s flagship store. It has many holiday themes and is aimed at getting consumers ready for the shopping season that begins the next day on Black Friday. The discounts that most companies place on their products in late November and December create an urgency to buy because there are consequences for missing out. Advent calendars, originally used by German Lutherans in the 19th and 20th centuries, also help to build anticipation for the cheerful holiday season. The time of “togetherness” is rewarding to many, and psychologists have found that when there is an expectation for a reward, humans feel more delight in waiting for the reward than actually receiving it. As such, the festive season acts as a month-long buildup towards the holidays in December. This is why traditions like decorating a Christmas tree, roasting smores, sending holiday cards, and watching the same holiday movies each year are often associated with happiness.

Since 2020, the COVID-19 pandemic has thrown holiday traditions and normal life on its head. When lockdowns began in early 2020, travel became dangerous. By winter, more than a quarter of a million people had died from the virus in the United States, and the Centers for Disease Control urged people not to travel for the holidays. Shopping malls, which were normally decorated up to the ceiling for the festive season, had to shorten their hours to reduce the spread of the virus. Online shopping replaced in-person gift browsing, and many families ate dinner together over FaceTime.

However, stores and corporations found ways to adapt to the now-sedentary lifestyle that Americans had become accustomed to throughout the year. There was an increased emphasis on supporting local businesses, citing the hardships of the pandemic on the economy and people in their area, upon which retailers could double down with fresh products, sales, and discounts. Many companies expanded their gift card and e-card sales, especially if they could be added to a user’s shopping account. Curbside pickup and delivery options were popularized, allowing customers to do business with their favorite retailers and feel safe from COVID-19. There was also a rise in companies mailing catalogs and postcards to customers’ homes, serving as a physical reminder of their business that could be held in one’s hands. Additionally, many retailers increased promotional items that were included with purchases, such as 2021 calendars.

The holiday season this year faces a different crisis. While in-person shopping and gatherings have become safer due to COVID-19 vaccines, the biggest obstacle consumers and businesses now face is the shortage of products. Demand is currently much higher than the supply due to a plethora of factors, such as transportation bottlenecks, labor shortages due to the pandemic, inflation due to unmet demand, and climate change. Currently, many are faced with high prices and long wait times for their holiday gifts to arrive. Consumers were even encouraged to start their holiday shopping in October. As a result, families may find that certain toys and electronic devices are off the table for this year’s holiday season. However, it serves as an undeniable reminder that the holiday season has become intricately connected with the economy, and there is a blurred line between where joy and nostalgia end and where marketing begins.

The holiday season has undergone massive changes throughout human history. What originally began as religious festivities became the exemplification of capitalism and a genius usage of human psychology to influence consumer buying decisions, but of course, most find cheer in the time spent with families and friends, not in the gifts bought for them. Reuniting with family for a special occasion each year allows for the rekindling of unspoken bonds, and the continuation of traditions that bring people back to times when they were younger. Reflecting on the past while looking forward to the future is necessary for mental growth. The holidays provide a perfect outlet for many to set aside arguments and simply enjoy the company of one another.