The Hot New Band in Town 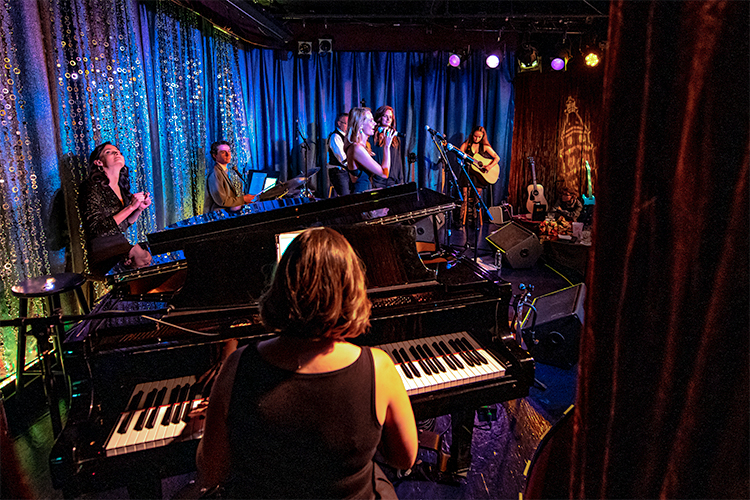 There’s a hot new band in town, and among its talented members is Thomas Jefferson’s very own teacher, Eileen Adair.

On Sunday September 22nd, the vivacious new band Gin and Tonix took the stage at the Clocktower Cabaret. “Filling the venue can be challenging sometimes, but for this band it was quite easy. We sold out three weeks before the concert and that is great news,” said band member Jason Spillman. The full crowd settled into the eclectic venue and at 7:00pm, the lights dimmed, and the crowd cheered as the show began.

The band is composed of seven members: Jason, Madi, and Ian Spillman, Kacie and Trinity Thomas, Morgan Griego, and Eileen Adair.  It is not just their passion for music that brings the group together, however. Jason Spillman is the father of the two college students, Ian and Madi Spillman. Additionally, the three female vocalists are sisters: Morgan Griego, Kacie, and Trinity Thomas. Adair has known them for quite a long time as she used to babysit them in her teens. All of the members are close and trust each other immensely both musically and personally, and their bonds are evident when they play on stage.

Throughout the night, the band performed some incredible covers of songs like Easy by Lionel Richie, Feeling Good by Nina Simone, and Swing Low Sweet Chariot by Josh Turner, among others. The group chose mostly songs that are country, indie, rhythm and blues, or folk in origin, giving the entire show a groovy sound that went into the audience’s ears smoother than the Tennessee Whiskey they sang about. All of the members are multi-talented and many played various instruments throughout the show. Adair frequently switched from piano to ukulele to vocals showing off her incredible range of talent. The female vocalists would take the lead on one song, singing harmony on another, or jump on an instrument like piano or guitar. Drummer Ian also stepped into the spotlight to sing lead vocals on a few songs as well. With every song, it was really anyone’s guess what each member would be doing. The vast amount of musical talent was evident, and the switching up of roles really kept the show alive and fresh; it gave each song a unique sound.

The band also has a special connection to a certain local organization. After the intermission, bassist Jason Spillman brought the audience’s attention to a bucket he held in his hand. He explained that they would be passing it around for donations to the Denver Actors Fund which is a non-profit organization that supports local artists, musicians, and actors. It was an organization that his sister Amy Malmgren helped get off the ground before she unfortunately passed away. By the end of the night, the bucket was filled with donations. Additionally, ten percent of all proceeds from ticket sales were donated, gifting a lucky $777 to the organization. Gin and Tonix is as passionate about their community and family as they are about their music, which is touching.

Gin and Tonix began their musical journey together last spring when the group was invited to play a single song at a fundraiser at the Clocktower Cabaret. They were so well-received by the audience that the owner of the venue asked them if they would be interested in performing again. The group eagerly agreed and decided to embark on the journey of creating a show together. However, creating a performance is a difficult task, especially with all the band members being highly successful and busy people. “If you could take a picture of our collaboration process, it would show dozens of group text messages, a bunch of GIFs, a few emails, a handful of sheet music, and beer. Somehow it has worked well for us – or at least we think so,” said Kacie Thomas. The band used group texting and calls to decide on the various songs they wanted to perform. Everyone had a few to contribute and while some were vetoed, others were happily embraced by the members. Once they had all the songs they wished to perform, each member learned their own part on their own time. After a few months of preparation, in August, the group met briefly in Jason Spillman’s studio for five rehearsals, each lasting about two hours long. To create such an impressive act in just a few short months and with only a few rehearsals is awe-inspiring.

What is even more awe-inspiring, though, are the musicians themselves. Many come from musical families and are absolutely dedicated to their art. Each of them have been involved in music for most of their lives: growing up in musical families, playing multiple instruments, or singing in choirs and theater performances for years. “Music is important to me because it’s a universal language – it’s something you understand regardless of your age, gender, race, religion, social status, economic status, heritage, sexual orientation, anything. Everyone understands music and what it can contribute to an individual’s life or an entire community,” said Trinity Thomas. Music is a medium that can convey messages and emotions unlike any other. It creates an inexplicable bond through which all people can connect on a very personal level. This band did a particularly great job of making that connection with the audience as there were moments of thunderous applause, laughter, and even some tears after certain songs.

Clearly these amazing musicians are incredibly passionate about what they do. When it comes to advice, Morgan Griego had some wise words to share. “Keep [music] a priority! You’ll only wish you stuck with your guitar lessons once they’re gone and your memory isn’t as sharp. If not that, keep it near and dear; keep playlists personal and chock-full of songs you love, dance to them, drive to them, cook to them. Surround yourself with sounds and people who enjoy watching and listening and feeling you enjoy it with them!” If you find yourself craving an emotional musical experience or even just a fun night out, consider seeing the next Gin and Tonix show at the Clocktower Cabaret on April 26th.