The Maddest March of All 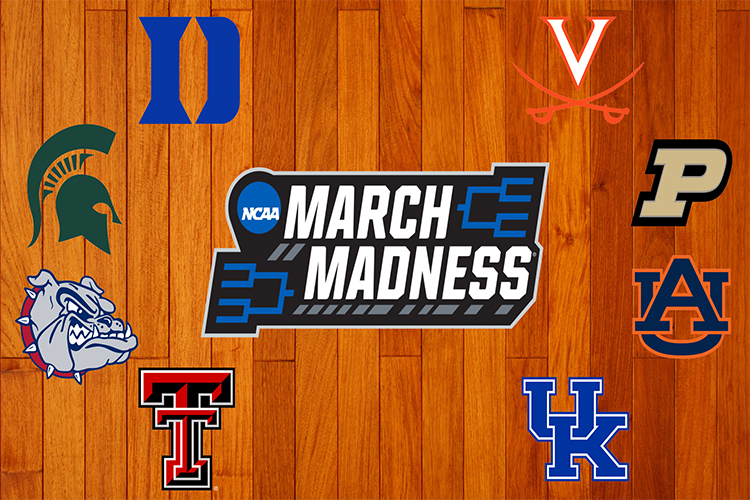 Now that March Madness has come to an end, it’s time to rank each teams performance.

Heading into this year’s tournament, Duke was the fan favorite by a landslide. With a staggering 70% of Americans betting on Duke taking home the Wooden Championship trophy, the Duke Brotherhood had high expectations. Unfortunately, they did not meet those expectations. With six seconds remaining in the game, top recruit RJ Barrett missed one of two free throws that would have tied the game. Barrett only had a 66.5% free throw percentage at the end of the regular season. On top of that, Duke won by a margin of two points or less in their previous two games in the tournament. Despite losing in the Elite Eight, star player Zion Williamson had an amazing tournament performance, averaging 8.5 Rebounds Per Game (RPG), 1.75 Blocks Per Game (BPG), 26 Points Per Game (PPG) on 62% shooting as well as taking home the Naismith College Player of the Year award. Overall, Duke underperformed in this year’s National Collegiate Athletics Association (NCAA) Tournament.

Heading into the tournament with a large majority of Americans projecting Gonzaga to make a Final Four appearance, the Zags had to live up to the hype. Leading up to the Elite Eight, Gonzaga was on a roll, beating fourth seed Florida State by 14. In the tournament, the Zags’ title hopes were ended in the Elite Eight by Texas Tech. Leading the way was star forward Rui Hachimura. Hachimura had an impressive tournament run averaging 5.75 RPG, 16.5 PPG on 43% shooting. In their tournament loss to Texas Tech, Hachimura put up an impressive 22 points and six rebounds, but it was not enough to move on. Although Gonzaga was expected to make a run much deeper into the tournament than they did, their performance was great. With the loss of Hachimura to the National Basketball Association (NBA) Draft, Gonzaga looks to find their next star to lead their team to victory.

Virginia finally won their first NCAA title. The Cavaliers have had high expectations for the last couple of tournaments, but finally proved their worth. Virginia won five out of six games by two possessions or more and only scored below 60 once. Leading the team to victory was top prospect De’Andre Hunter. Hunter stands at 6’ 7” and has an incredible scoring ability. In the title game win over Texas Tech, Hunter scored 27 points on 50% shooting, pulled down nine rebounds and made four threes. Hunter is now projected to the fifth overall pick in the upcoming 2019 NBA Draft and definitely has the skills to back it up.

Entering the tournament, Michigan State had only one real roadblock to the Final Four. With a relatively easy schedule up until the Elite Eight, Michigan State won every game by ten or more points and even 20 against Minnesota. When it came time to play the three-headed monster that was Duke, they came prepared. Cassius Winston, a six-foot guard, put the team on his back putting up 20 points and 10 assists to edge out Duke by one point. Unfortunately, the Spartans did not play their best basketball against Texas Tech in the Final Four matchup and ended up losing by 10. However, the Spartans did have an amazing tournament appearance and should be a future contender for the title.

Kentucky was not seen as a contender for this year’s NCAA Tournament compared to other teams. Coming into the tournament with a 30 and seven record, the Wildcats had a tough schedule ahead of them. Ultimately losing to five seed Auburn in the Elite Eight, Kentucky still had some big wins. These wins were highlighted by the player of Tyler Herro and PJ Washington. Washington, a 6’ 8” sophomore, is the definition of an automatic bucket. Despite battling injuries during the postseason, Washington showed out in the Wildcats’ 77-71 loss against Auburn, putting up 28 points and bringing down 13 boards. His counterpart, Herro, a 6’ 5” freshman, is a great shooter. During the regular season, Herro averaged a phenomenal 93% at the charity stripe. Despite this great two-man duo, the Wildcats could not make it past the Elite Eight.

Texas Tech arguably had the best tournament run this year. Heading into the tournament with a 81.28 defensive rating, the Red Raiders were not going down without a fight. Texas Tech beat three top three seed schools all behind the help of Jarrett Culver. Culver is not only a defensive monster, averaging 1.8 steals and 1.2 blocks throughout the tournament, but he can also score the ball pretty well. During the regular season, Culver averaged 18.5 PPG on 46.1% shooting from the field. His height, 6’ 5”, while not unusual for a shooting guard, allows him to be more aggressive on the offensive end and lethal on the defensive side. The Red Raiders played as a phenomenal basketball team throughout the entire tournament, sharing the ball around equally as well as locking up on the defensive end. Despite losing in the championship game, Texas Tech showed that they cannot be messed with and are a tough competitor.

Purdue had a phenomenal tournament run this year. The boilermakers headed into the 2019 NCAA Tournament projected to lose in the round of 16 to second seed Tennessee but had other ideas in mind. Despite losing to Virginia in the Elite Eight, Purdue came out and beat Tennessee by five points behind a superstar appearance by guard Carsen Edwards. Edwards, a 6’ 1” Junior, averaged a staggering 34.8 points throughout the four tournament games the boilermakers played. Edwards put the team on his back the entire tournament run and proved to the world that he is a top basketball player in the NCAA. The boilermakers were not only a fan favorite during this year’s tournament, but also showed the world what they could really accomplish.

Auburn had a record-setting tournament run this year, making the Final Four for the first time in program history. Throughout this historical run, Auburn defeated three teams that were the four seed or higher, but sadly ended up losing by one point to Virginia. Led by point guard Jared Harper, the Tigers proved they would not be pushed around. Harper, standing at 5’ 11”, was the centerpiece for this Auburn team. Harper averaged 15.2 PPG and 5.8 Assists Per Game (APG) during the regular season despite his size. His contribution to the team, especially during their Elite Eight win over two seed Kentucky, was unmatched. Although he was not the scorer that many teams will rely on, his basketball IQ was top-notch, giving him a clear advantage over his opponents. Although the Tigers did lose by one point to Virginia in the Final Four, the Tigers were the most fun team to watch throughout the tournament.