The News Spreading Across the Nation 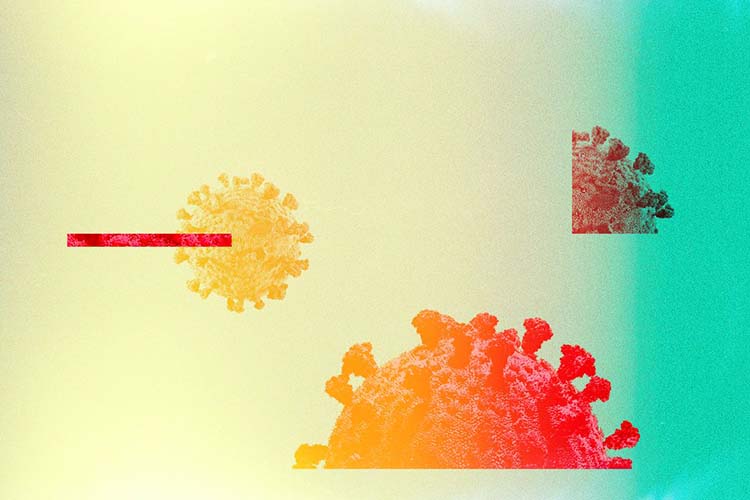 A collage of the mutated COVID-19 cell that is now called the Omicron Variant. graphic by Alex Cochran

As we enter a new year, a new COVID-19 variant looms over the world.

As if the serial killer has come back to life at the end of a horror movie, during a time when the world felt as if it had slowly shifted back to normal, COVID cases began to rise rapidly. The newest variant, Omicron, has been said to originate in South Africa and was discovered due to its 50 distinct mutations. Omicron has spread faster than any other COVID-19 variants and has become a shadow looming in everyone’s mind. With schools going remote, hospitals overflowing, and stores having barren shelves, the world seems to be going back in time to March of 2020.

In early December, a California resident coming back home from a trip to South Africa was discovered to be the first American to have the Omicron variant. As of December 25, 2021, the Centers for Disease Control (CDC) estimates that 58% of new cases were of the Omicron variant. The virus’s rapid spread is two to three times faster than the Delta variant. This spread has caused much concern within the medical community, as Omicron has shown to be less susceptible to the vaccine. With that in mind, the severity of Omicron is still up for debate.

Without proper data, the CDC has been reluctant to make broad statements about the severity of this new variation. What is known is that, though Omicron can lead to possible hospitalization and death, it appears to be less severe than the Delta variant. The science behind why the Omicron variant is less severe may be because of its cellular makeup. The virus’s ability to affect the upper airways, such as the nose and nasal cavity, is powerful. However, the same infecting strategy does not work as well in the lungs, leading to less severe cases. However, these less severe cases are mainly being seen in the vaccinated population. According to British health officials, the risk of being hospitalized with the Omicron variant decreased by 65% for those with both of their vaccine shots. This percentage increased to 81% when they factored in the booster on top of the vaccine.

Omicron’s skyrocketing numbers mean a higher infected population, and though the decrease in severity is beneficial, hospitals and medical resources are strained. A higher infected population means an increased number of hospitalized individuals. As cases rise, shortages of supplies, doctors, and nurses increase. A surge from 65,000 hospitalizations near December 25th to now, only two weeks later, to 110,000, has shown to be pushing hospitals. And this seems to be just the beginning. As of now, the CDC forecasts that by the end of January, COVID-19 will be sending at least 27,500 and up to 53,700 Americans to the hospital daily. Many states are currently setting new protocols to tame the strain being placed on hospitals. However, it has been increasingly difficult for the hospitals to gain control over the amount of COVID-19 patients flooding in with resurges. The critical issue seems to be staffing shortages. Health-care workers have left their jobs rapidly throughout the pandemic, and those who have not left their jobs cannot continue to work due to being infected with the virus. According to the president-elect of the American Association of Critical-Care Nurses, the staffing crisis has reached its peak since the beginning of the pandemic. Due to the pandemic’s continual nature, the issues within the healthcare system are being exposed with this new rise in patients.

Not only has Omicron placed a strain on the healthcare system, but also the country’s education system. At the end of winter break in January, worldwide districts and schools debated whether or not to move online. Within universities, the public sees an increase in a two-week plan of remote learning at the beginning of their quarters or semesters. However, as one moves down the chain of education, more and more schools are staying open with new COVID-19 policies. Schools within California have adapted to using zoom classes for students who are out with the virus. Even in major metropolitan areas, such as Denver and New York City, schools have been able to stay open throughout the high numbers. Many schools, including those within the Denver Public Schools district, are experiencing high staffing shortages. This appears to be one of the main reasons for the possibility of a shutdown and is the reason for many schools going remote in other areas. However, within DPS, students are beginning to demand stricter COVID-19 policies. A group of students within DPS released a petition on January 12th. Gaining over 500 signatures from the student body, the students sent a list of demands to the district. The needs included having KN95/N95 masks provided to students, HEPA filtrations within classrooms, integrated learning for infected students, twice a week COVID-19 testing for in-person students, and more weather-protected areas for students to eat lunch outside safely. The district responded with a push for schools to stay open throughout this spike and has been working hard to monitor COVID-19 rates. However, this plea made by students only demonstrates the pressure being placed on school districts during this time.

Whether or not the country will see a repeat of the lockdowns experienced in March of 2020 is still up in the air. However, with the cases rising, it is clear that heavy burdens are being placed on essential systems within the country. The hope of a “normal life” again feels even more out of reach, but the desire for that life again is needed in order to take the proper precautions and keep everyone safe.