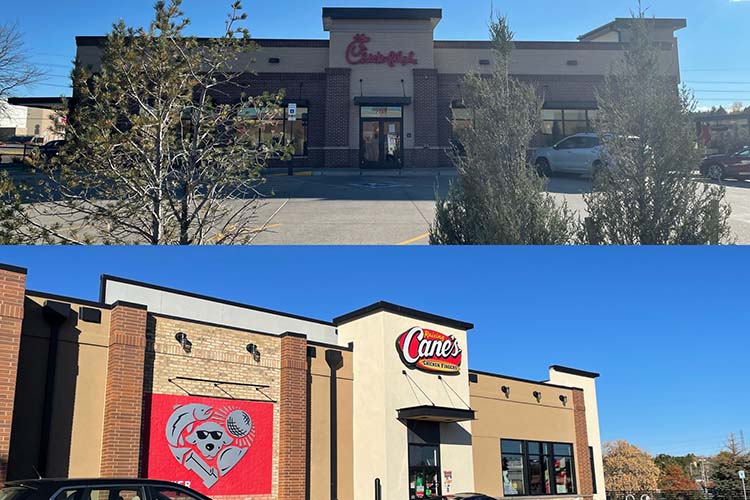 A comparison between Chick-fil-A and Cane’s. photo by Grace Leonard

The debate between the best chicken-based restaurant near Thomas Jefferson High School: Chick-fil-A vs. Cane’s.

At Thomas Jefferson High School, we are pretty lucky to have lots of restaurants near us. Out of the many options of places students have to eat, they continuously tend to head towards the chicken-based restaurants: Chick-fil-A and Raising Cane’s, otherwise more commonly known as Cane’s. I wanted to compare the two restaurants from peers’ opinions based on price, variety, sauce, and fries to see which restaurant was considered the best chicken place.

The prices at both restaurants are very similar as an average meal costs around $7 to $10 depending on what you get. Senior Denise Hanselman shares that she likes the prices at Cane’s as she gets the kids meal which is $5, and the quantity of food is enough to satisfy her hunger. However, people who prefer Chick-fil-A do not have a problem with the price as it is not unreasonable for the quality of food they get.

Moving on from the prices, a big factor in deciding the better restaurant between Chick-fil-A and Cane’s was the variety of food offered. Many students agreed that Cane’s did not have a lot of variety because it is just chicken. At Cane’s, you are able to get the classic chicken tenders and a sandwich, but many students do not know that this is an option. However, Chick-fil-A has more options compared to Cane’s as they offer chicken nuggets, the Chick-fil-A sandwich, wraps, salads, grilled chicken, and —most uniquely— mac and cheese. Senior Eliana Luna included, “I like Chick-fil-A the most because of the option to get mac and cheese.” The variety of food at Chick-fil-A allows people to have more choices and be more satisfied.

Another deciding factor was the sauce at both restaurants. This was a hard choice as both restaurants have delightful and exclusive sauces. Some students share that they like the Cane’s sauce because of the seasoning that is included in it, but others prefer the Chick-fil-A sauce. Senior Mitchell Accola adds, “The Chick-fil-A sauce is the best because it has a tangy flavor.” But overall, the results about the sauces were very split as both add flavor to the meal and are liked by almost all of the customers.

Both the restaurants also have outstanding fries that will make your mouth water just by thinking about them. This was a hard choice for students to make, but the majority of the students preferred Chick-fil-A’s fries more than Cane’s, simply because of the waffle-like shape. Students even add that the fries contain additional salt and crispness that makes them ten times more delicious. The fries at Chick-fil-A are like no other but Cane’s gives them good competition when it comes to their fries.

Based on the responses to these four categories, Chick-fil-A is the clear winner as students believe that the prices are reasonable, there is a lot of variety on the menu, and the sauce and fries are unbeatable compared to Cane’s. Even though Chick-fil-A is closed every Sunday, the company has made a good reputation for themselves as they guarantee customer satisfaction and incredible food that fills you up. Cane’s might be a delicious, new restaurant close to TJ but Chick-fil-A continues to have more customers who return for their incomparable chicken.