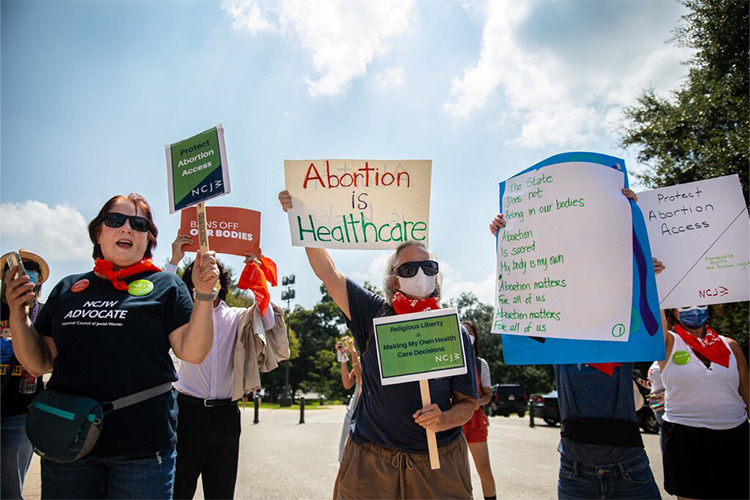 A new abortion law in Texas prevents women from getting abortions.

Women’s reproductive rights have consistently been a highly controversial topic in America. From Roe v. Wade, a law enacted in 1973 to protect a woman’s ability to get an abortion, to the new Texas Heartbeat Act, a much more restrictive abortion law, the past indicates that what women have been able to do with their bodies has been dictated by the government. The Texas Heartbeat Act is causing a major shift in society and forcing women to think about what this new law could mean for them.

Greg Abbott, Governor of Texas, signed into law the Texas Heartbeat Act on September 1, 2021. The law has many different aspects, one of which being that after the first six weeks of pregnancy, a woman is not allowed to get an abortion. Additionally, this law allows anyone with knowledge of an abortion occurring after six weeks to sue abortion providers for as little as $10,000; the woman getting the abortion can not be sued. Those whom she had received help from to terminate the pregnancy can face legal repercussions. Another provision of the law that has raised some concern is that even in cases of rape or incest, despite the circumstances, it would still be illegal to have an abortion after six weeks of pregnancy. In order to address these concerns, Abbott released a statement on September 7th, saying that he would, “eliminate all rapists from the streets of Texas.” However, many people across the country believe that this goal feels particularly lofty when “in 2019 there were 14,656 rapes and attempted rapes reported across the state,” as was provided by the Austin-American Statesman.

Currently, there are over six million women of childbearing age in Texas and each component of the law affects these women in different ways. Although women can get an abortion in their first six weeks of pregnancy, many women are not aware that they are pregnant until after this time period. Furthermore, most women do not start showing until they are 16-20 weeks into their pregnancy, thus the six week ban ensures that women may not be able to get an abortion by the time they figure out that they are pregnant. Additionally, abortion clinics are closing, as doctors fear being sued under this law, effectively cutting off another access point for women to get abortions. As of now, there are only 19 clinics that provide abortions in Texas. These clinics have seen a severe decrease in patient visits and many staff members have begun to quit.

Not only are women in Texas affected by the Heartbeat Act, but society as a whole. This new law means that a large societal shift may occur if more states were to follow in Texas’s footsteps. In the past few years, other states have begun passing more restrictive bans on abortions as well. The Washington Post states, “Republican-led states have passed a wave of restrictive abortion laws in recent years. Two states this year – Montana and New Hampshire – passed bans on abortions at 20 and 24 weeks, respectively.” If more Republican leaning states begin passing restrictive laws on abortions, the United States would change dramatically as more women will be unable to get abortions, causing massive conflicts. These conflicts have already begun as the Supreme Court’s refusal to block the abortion ban is causing an uproar as people are afraid that this may indicate that the Supreme Court is going to rescind the ruling made in Roe v. Wade. As a result, some Americans believe that the US is going backwards instead of forwards, whereas others believe that this is a new and wonderful leap for society. In particular, the Biden Administration believes that the Texas Heartbeat Act is causing the US to take a step backwards. In an attempt to prevent this from happening, the administration is suing Texas because they believe that the law is “clearly unconstitutional.” Vice President t Harris, when asked about the ban, stated, “The right of women to make decisions about their own bodies is not negotiable.” The rest of the administration shares these sentiments, as shown by the President’s continuous support for the Roe v. Wade abortion laws that went into effect back in 1973. Due to the lawsuit the Biden Administration set in motion, a federal judge blocked the Heartbeat Act on October 6, 2021. As a result, Texas has already started to appeal the ruling and it is unclear how this will affect the abortion procedures in the state. A federal judge blocking the law is the first legal challenge that Texas has faced since the Heartbeat Act went into effect.

Regardless of whether or not Roe v. Wade is rescinded, society in America is starting to shift. Abortion laws are a massive source of conflict in the U.S. and the extreme changes that the Texas Heartbeat Act introduces will create a culture that is less accepting of abortions. Although this restrictive law has only been passed in Texas, more states can follow suit, thus changing life in the US forever.