The Russians Bring Scandal to the Ice 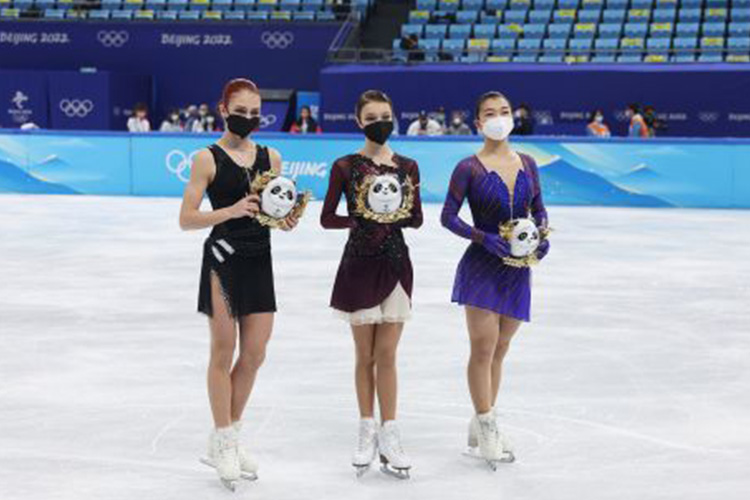 Alexandra Trusova (Russia), Anna Shcherbakova (Russia), and Sakamoto Kaori (Japan) posing for a photo after receiving their medal in the women's free figure skating event in the 2022 Winter Olympics. photo by Matthew Stockman

In the 2022 Winter Olympics, a Russian figure skater tested positive for a drug that is banned from the Olympics.

There have been multiple scandals at the recent 2022 Winter Olympics, mostly surrounding the Russian female figure skating team. The women’s Russian team, coached by Eteri Tutberidze, consisted of Alexandra Trusova (age 17), Kamila Valieva (age 15), and Anna Shcherbakova (age 17). Tutberidze is the head coach at the Sambo 70 skating club in Moscow and coaches single-figure skaters. Russian coaches have been known for their cruelty and how much they push their students, and Tutberidze is no exception. She has had multiple accusations of her brutal training techniques. According to USA Today, the Sambo 70 club encourages dehydration, starvation, and enforces unchanged practice regimes despite injuries. Critics have also noticed Tutberidze’s students regularly retiring or suffering from career-ending injuries before the age of 18. Several of her male students also suffered serious injuries under her training.

All of these scandals have just recently come to light after the doping scandal of the 2022 Winter Olympics. Valieva was entering her first Olympics at the age of 15. Valieva is the current world record holder for the women’s short program, free skating, and total scores. Overall, she has set nine world records during her career, so many were shocked when she tested positive for a banned performance enhancement drug before the Olympics. “The Russian Anti-Doping Agency (RUSADA) provisionally suspended Valieva a day after her test results became public. A day later, the organization’s Disciplinary Anti-Doping Committee canceled the suspension, and Valieva was able to compete at the Olympics,” said CBS News. However, many say Valieva is not to blame because she is only 15 and instead the blame should fall on Tutberidze because she is legally responsible for her athletes and the doping incident. People are still outraged that she was able to compete in the Olympics, especially since an American track sprinter, Sha’Carri Richardson, tested positive for marijuana in a drug test prior and was not allowed to compete at all in the 2021 Summer Olympics even after her test came back clean before one of her events.

If all eyes weren’t on Tutberidze, they are now. Valieva was predicted to win gold for the free skate, but she did not live up to that prediction. Valieva was in first place for the first rounds but sadly fell to fourth after a free skate in which she fell multiple times. However, her two other teammates, Alexandra Trusova and Anna Shcherbakova were placed in the free skate. Shcherbakova, an accomplished skater, won gold for the free skate. She appeared happy on the podium but was later seen sitting alone and almost sad. According to People Magazine, when Shcherbakova was interviewed after she won gold, she said, “it’s hard to tell. I have mixed feelings — I was very happy to be [at] the right time and the right place.” Shcherbakova also told reporters, “this has been what I’ve been working toward every day. I still can’t comprehend what has happened — on one hand; I feel this emptiness inside.” Trusova won silver in the free skate but was not happy about it. She was seen crying before going to the podium to receive her medal. She was caught saying, “I hate skating. I hate it. I hate this sport,” she shouted, “I will never go out on the ice again!” as stated in an article for Yahoo Sports. Trusova was upset that she was the only one without a gold medal on her team, with Shcherbakova getting a gold medal on the free skate and Valieva winning a gold medal in a team event. These reactions show how hostile and competitive the environment Tutberidze has created between her skaters.

Though Valieva was able to compete in the Olympics, any medal she would have won risked being taken away because of her positive drug test. She is still under investigation, and the public will know later this year if she is going to walk away from the 2022 Winter Olympics with a gold medal or not. Either way, Valieva’s reputation as an athlete has been tarnished. The intense pressure and expectations these young girls are put under are unfortunate, as they are only teenagers and have so much more growth ahead of them.