The Season to C 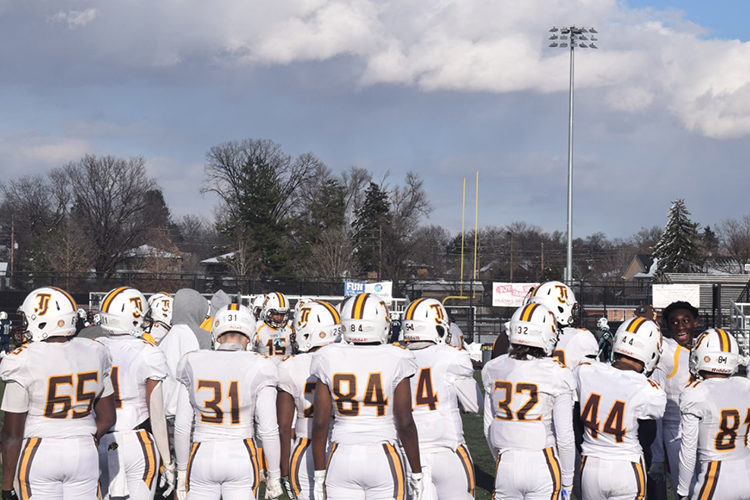 Even without their devoted fan base, Thomas Jefferson athletes are working hard to represent their school and to make their supporters proud. photo courtesy of TJ Yearbook Staff

This year, all high school athletes had to face disheartening realities.

With seasons cut short and events without spectators, the experience of high school athletics has changed drastically. Despite the uphill battle, athletes from Thomas Jefferson High School have persevered to make the most of their situation. Currently, CHSAA (Colorado High School Activities Association) is facilitating its third season of the year, which encompasses boys’ soccer, football, gymnastics, girls’ volleyball, unified bowling, and field hockey. While TJ does not have a field hockey or unified bowling team, its boys’ soccer, volleyball, and football teams are all participating in successful seasons.

Sophomore wide receiver and defensive back Tristen Martinez has found this football season to be trying but worth the reward of competition. Martinez remarked, “This season is a lot more challenging than last due to all the COVID-19 restrictions. As a team, we are much more careful because we want to play and compete for a state title.” Today, every team’s worst fear is having a player test positive for COVID-19. With playoffs on the horizon, even one positive test could mean a team’s forfeit from playoffs. The football team is determined to keep COVID-19 from standing in the way of their goals. Martinez stated, “Our goal as a team is to win the 4A State Championship. We have a great shot this year, led by our captains Avery Shunneson, Trent Koser, Jaden Hill, and Tiny (Tre’Shawn Smith).” Currently, the football team is ranked first in the 4A North (Spring) League with a record of 5-0, making them solid contenders for the 4A State Title.

In addition to the football team, Thomas Jefferson’s volleyball team has also been quite successful. With a record of 8-3, TJ volleyball is ranked third in the 5A/4A Denver Prep League. Sophomore middle blocker and outside hitter Laila Hilton has high hopes for her team’s postseason. Hilton explained, “This season my team made the goal to make it to regionals and possibly state, just like the year before.” The volleyball team is well on their way to make an appearance at regionals, and their chances of qualifying for state for the second year in a row are hopeful. Though every athletic program has struggled this year because of COVID-19 restrictions, volleyball players faced unique issues. The traditional high school season begins in August and ends in November, allowing for the club season to begin in November. However, because of the switch in seasons, players either had to choose between seasons or suffer the consequences of playing both. As Hilton put it, “COVID-19 affected this season because it made it difficult for players to choose between club and high school. Last year, club and high school took place during two completely different times, making it easier to participate in both seasons. While playing both high school and club is difficult physically, it is fun and has helped a lot with my time management.” Even though many volleyball players faced challenges from this dual season, it is safe to say that they dealt with the strife. Hilton summed up her experience by saying, “Both teams benefit me in different ways and even though it’s been hard adjusting I just think we’re all glad we have the opportunity to even get to play the game we love.” As Thomas Jefferson’s kill leader, it is clear that Hilton is making the dual season work to her advantage, and hopefully her skill will help carry the Spartans to their fourth appearance at the State tournament.

Junior gymnast Sara Eyassu is one of the many athletes at Thomas Jefferson making the best of new restrictions and rules. Eyassu explained, “This season was so much shorter than last. I distinctly remember the unpreparedness my team and I felt as we had our first scheduled meet several Saturdays ago and we had only had access to our equipment for five days.” The new season schedule left many teams feeling unprepared for competition due to inadequate practice leading up to competition. Eyassu is incredibly grateful that the gymnastics season was able to go forward, even though aspects of the season were changed. “Regardless of these changes, I’m very thankful to have the team I do that has maintained an encouraging spirit throughout the season. I never thought you’d catch me on the beam doing the jumps I’m doing. I don’t know whose idea it was to perform skills on an elevated stationary line, but they knew what mental and physical strength it would take.” Athletes like Eyassu confirm that the best growth is made when people are competing against the odds.

Competing in high school sports during the time of coronavirus is complicated, but it speaks to the amount of adversity that athletes at Thomas Jefferson are able to overcome. All athletes representing TJ this year are respected and supported fully by their community, and we wish our teams a safe and successful end to their season.