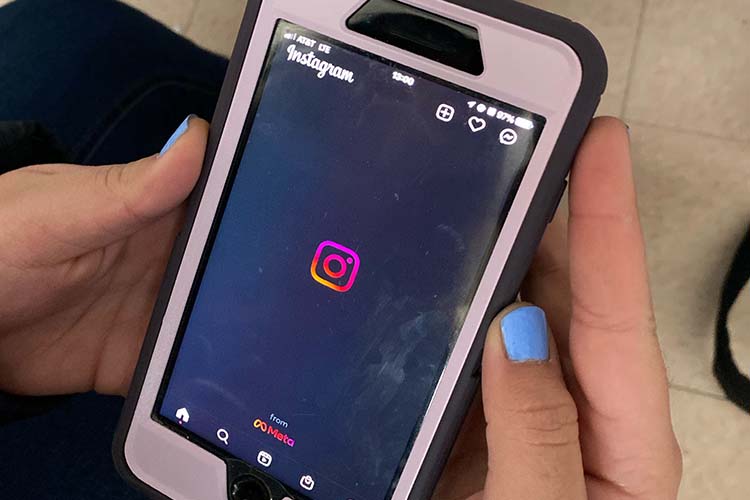 Thomas Jefferson instagram pages have been discouraged due to cyberbullying. photo by Roxanne Wilkerson

A new semester brings new challenges and changes with the new phone policy that Thomas Jefferson High School has implemented. Some may wonder: what is this, what is it caused by, and most importantly why does it matter? To start off, this new phone policy requires that students need to leave their cellphones in the classroom if they want to go to the bathroom, and if a phone is seen in class, it will be taken away on a three strike policy.

When students are seen taking out their phones or using their phones, it is a strike; each strike increases in severity of consequences. The first time the phone is spotted in class, the teacher will take it. The second time, the phone will be brought down to Assistant Principal, Andrew Skari. Finally, the third time a student is spotted with their phone, it is a call home and a meeting with the Student Excellence Team. Of course the severity of these punishments still depends on each teacher’s discretion, but the system has been designed to show respect for the learning environment and the community culture at TJ. Math teacher Katie Fitzgerald said, “It is unfortunate that we need to take [phones] away, but I would rather protect student privacy outside of my classroom and be more strict with the phone policies than have issues later on.” Fitzgerald mostly teaches junior and seniors, so phone usage was less of an issue for her, but she has noted that it is important to prevent issues on social media.

What is the cause of the new phone policy? TJ instagram accounts started popping up before break, most of which were harmless, but some of which were posting concerning content. Some inappropriate videos were taken that jeopardized students’ safety and privacy, along with other videos of students vandalizing the bathrooms, and numerous accounts of cyberbullying. Skari reports, “For two weeks before winter break, all I was doing was monitoring instagram. I don’t have the time and we don’t have the staff to not only keep our hallways and classrooms safe, but to also monitor social media.” Additionally, “[the posts] were starting to impact our building culture. For the most part TJ students are good to each other. This had an impact on our positive school culture, but this has gotten better since break.” The phone policy was necessary for administrators to implement because it allowed them to devote less time to monitoring social media, and ensure that TJ stays a safe place.

Further, many people struggle from the pressures of social media as it is, but throwing cyberbullying into the mix makes things much more complicated. According to the school psychologist, Kane Hamilton,“Social media can have positive and negative consequences. In a world where we have become digital because of COVID-19, social media can create connections where there may not have been any previously. Cyberbullying is one of these which can lead to mental health consequences and negative relationships.” Social media is a good way to connect with peers and friends; however, others need to be mindful of what they post and how it can affect others.

People never truly know what someone else is going through, so be sure to be kind to everyone you encounter on and offline. There are several resources available at TJ to talk to someone. Anyone can talk to a Mental Health professional for support.

Thomas Jefferson instagram pages have been discouraged due to cyberbullying. photo by Roxanne Wilkerson