The Stars are out in Charlotte 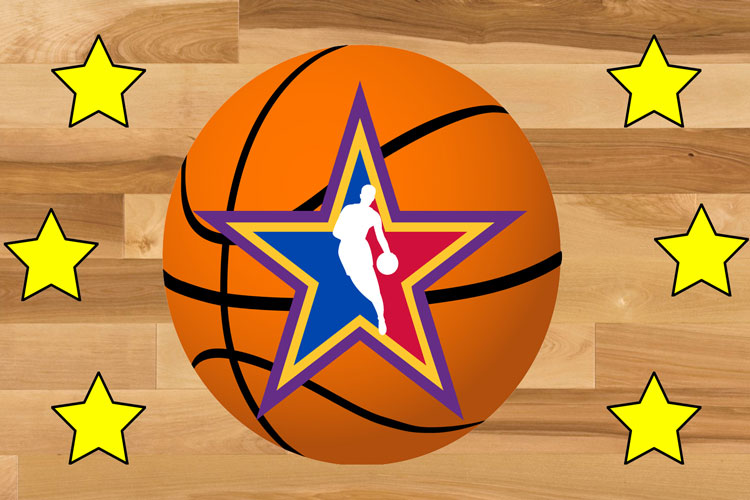 Basketball stars on the hardwood. graphic created by Noah Mintz

Although the 2019 NBA All-Star weekend was a complete tank in terms of viewers, it was still filled with surprises.

The new faces and exciting events in this year’s All-Star Weekend allowed for plenty of  of thrill and amazement. Going into the second year of the new All-Star selection format, LeBron James and Giannis Antetokounmpo led their teams in a tight battle. From slick passes to monster slams, this year’s all-star weekend did not disappoint.

The weekend began with Rising Stars and Skills Challenges. These events are usually the most unpopular and overlooked throughout the whole weekend, but this was not the case this year. The Skills Challenge consists of two players facing off in a battle of basket fundamentals. The challenge tests the players dribbling, passing, and shooting skills in a race against the opposing member. This year’s competition featured two of the most exciting rookies in the NBA, Trae Young, and Luka Doncic, but the most enjoyable player to watch was Nikola Jokic of our hometown Denver Nuggets. He made it to the semi-finals of the competition even though he is a center. Jokic currently averages 7.6 assists per game, which is the most by any center in the league and seventh overall in the league. The Rising Stars Challenge is a “makeshift” all-star game, but the participants are first and second-year players. The teams are split into Team USA, American players, and Team World, foreign players. This year was highlighted by a strong performance from Los Angeles Laker, Kyle Kuzma. Kuzma led his team to victory scoring 35 points and bringing down six rebounds along with taking home the game’s Most Valuable Player (MVP) award.

The next night, the weekend really began to get entertaining. Saturday night featured the Three-Point Contest and Slam Dunk Contest. The Three-Point Contest showcases the best three-point shooters in the league, testing their abilities beyond the arc. Each contestant has one minute to shoot a total of 25 shots from five different locations on the three-point line. Every ball rack consists of four basketballs worth one point and a ‘money-ball’ worth two points. The player can choose where he wants the ‘money-rack’ which consists of five ‘money-balls.’ This years contest included big names such as Stephen Curry, Damian Lillard, and reigning champion Devin Booker. The scores this year were disappointing for the most part, but Joe Harris from the Brooklyn Nets shot the lights out. Harris scored a 26 in the final round, securing him the victory, despite Curry hitting ten straight but falling short with a 25. Harris is currently leading the league in three-point percentage with 46.4%.

The Slam Dunk Contest allows for a live-viewing of the most jaw-dropping dunks performed by the highest flyers the league has to offer. The rules are simple: each player has to make a number of dunks. A jury scores the performance. The highest scores pass to the next round. In the final round, the player with the highest number of points wins. While the dunks this year were not the best compared to previous years, there were, of course, some highlights. Dennis Smith Jr. of the New York Knicks showed off his hops by jumping over popular rapper J. Cole, clearing him by a mile. J. Cole proceeded to grab to the ball and attempt a dunk but sadly missed, despite being very close. Although that was a sight, the real eye-opener of the night was Hamidou Diallo of the Oklahoma City Thunder, jumping over a 7’1” Shaquille O’Neal and finishing by landing his whole forearm in the basket. At the 2017 NBA Combine, Diallo posted the second highest vertical jump in history at 44.5”. He is only 6’5”. Overall, the 2019 All-Star Weekend showcased some of the best talent in the league: the future is looking bright. These players were able to showcased their skills on a huge stage, showing the rest of the league that they should not be messed with.