The War on Addiction 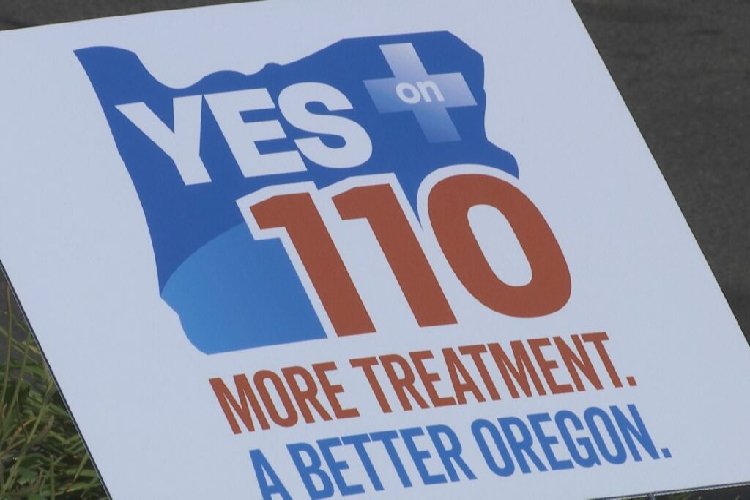 Campaign poster in support of Measure 110. courtesy of voteyeson110.org

Now that the bulk of the election season is behind us, we now know many important measures that were passed throughout the fifty states. In Oregon, for example, Measure 110 was passed by voters last month. This measure officially decriminalizes the possession of small amounts of illicit substances. It  will be put into effect on February 1st, 2021.

Prior to this measure, if someone was caught in Oregon with illicit substances, but not with the intent to distribute, they would face a year in prison, but now, the punishment has been reduced to a $100 fine or the attendance of a state-funded drug rehabilitation program. The new programs will be funded by the money saved from the new lack of arrests and incarcerations of those who would face possession charges, as well as tax revenue generated from dispensaries.

Those that campaigned for the measure claimed that with less severe punishments for possession, those that are afflicted with addiction can seek help without fear of retribution. They also made a point to mention that this measure is not the first of its kind. Plenty of countries have had similar laws and have seen great improvements in drug rehabilitation. For example, Portugal was the first country to legalize drug possession, and as a result, overdose deaths were cut in half, usage dropped, and the number of people in rehabilitation increased. And because of other countries’ examples, those that support this measure are optimistic that such improvements will also be applied to the state of Oregon.

However, there have been worries that the imposed fine of $100 is not a strong enough incentive for those who struggle with addiction to seek help, and drug usage would become yet another activity that wealthy people could participate in without any actual repercussions. Those in opposition of this measure also worry that this will encourage youth to experiment now that there is no risk of prison. They also argue that rehabilitation does not work for all addicts and will only continue the cycle of substance abuse. There is also concern about the allocation of tax revenue for the rehabilitation centers that would have otherwise been used for mental health and addiction programs that are already implemented in the state.

Because the measure does have gaps in its legislation, specifically when it comes to those that are minors, it is likely that there will be new campaigning from groups such as Oregon Recovers to alter the measure to further clarify the steps that will be taken to help at-risk youth.

Oregon has a significantly higher rate of addiction compared to most states, but with this measure, there is hope that the rehabilitation programs will help those who suffer from addiction rather than make them afraid of retribution and continue using substances. And with Oregon being the first state to have this landmark piece of legislation, it is safe to say that other states, possibly even Colorado, will soon follow suit. This sparks a new era after the War on Drugs, where addiction can be destigmatized and counseling and recovery will become the norm instead of fear and incarceration.