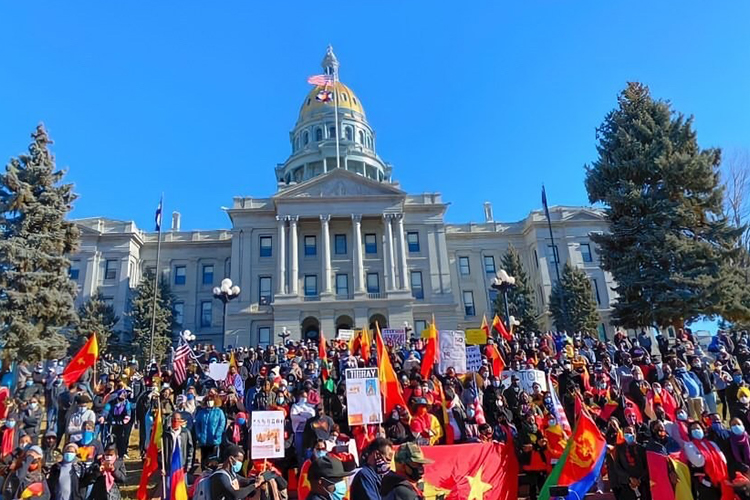 The Tigray community of Denver attracts the local government’s attention during a protest at the Capitol. photo by Sara Gebretsadik

The Tigray region of Ethiopia is currently suffering from a genocide initiated by the government.

Ethiopia is a country in Africa that has garnered worldwide recognition for its food, music, and biodiversity; there is even a distinguished Ethiopian community right here in Colorado. Its diversity is ever present, with over 80 different ethnic groups inhabiting the country. Tigray is Ethiopia’s northernmost region that supports several of these groups, on which the government has declared war.

Neighboring Tigray to the north is the country of Eritrea, which used to be part of Ethiopia. The Eritrean-Ethiopian War influenced this split, and the animosity between the two nations remained intact for 20 years until Ethiopia’s Prime Minister Abiy Ahmed came to power in 2018. He received the Nobel Peace Prize a year later for resolving the longstanding border conflict. Underlying tensions rose between Ahmed and the Tigray People’s Liberation Front (TPLF), as they were the dominant political party at the federal level before he took office. August 2020 rolled around with the much-anticipated general elections that Ahmed postponed as the coronavirus hit Ethiopia. This did not sit well with the TPLF party, so they held their own regional elections in September. Ahmed declared these actions to be unlawful, and TPLF fired back, “accusing him of leading an ‘illegitimate’ government that no longer had a mandate to govern,” noted the BBC. On November 4th, 2020, supportive forces of the TPLF attacked the Northern Command of the Ethiopian National Defense Force (ENDF) out of self-defense. In response, Ahmed marshaled a military offensive.

Ahmed forcefully occupied Tigray, shutting down phone, internet, and electricity services and banning journalists. Some telephone lines have opened up, but this blackout undermines the situation due to lack of access. Federal and regional officials are blocking food deliveries from the United Nations, impairing the 4.5 million people facing mass starvation. The entirety of humanitarian aid is blocked, threatening millions of lives in addition to the risk of COVID-19. The accompanying artillery strikes and mass killings—which first became apparent in the Mai Kadra massacre of up to 500 people—increased the direness of Tigray’s position. On November 23, 2020, Ethiopian federal forces surrounded the Tigray capital Mekelle, and three days later, Prime Minister Ahmed ordered them to attack. The Washington Post stated, “In occupying the province’s capital and other towns, federal forces, ethnic militias and allied troops from Eritrea have carried out massacres and rapes, according to the sporadic reports emerging from the region.” This has amounted to a culmination of over 60,000 refugees fleeing to neighboring Sudan, simply with the clothes on their backs. Billene Seyoum is a spokeswoman for Ahmed who denied these atrocities by claiming, “The criminal clique [TPLF] and their international proxies have been attempting to divert international attention by [making] unfounded claims of genocide as early as November to cover up [their] horrendous crimes.” The response from the Tigray diaspora heavily contradicts this statement.

Social media has become a place for activism in the past year, and the Tigray community has spearheaded a movement through it. It began with a sea of yellow profile pictures on Instagram identifying people by solidarity, instead of a typical face. Reposting credible news from Amnesty International and the United Nations High Commissioner for Refugees (UNHCR), launching and participating in Twitter campaigns, and spreading the word about protests has become routine. Sara Gebretsadik, a Denver South High School alum, has done all of this through her own social media accounts and is now extending activism with other Tigrayans through a newfound global organization recognized as Omna Tigray. It is a resource center that predominantly serves to educate, from fellow Ethiopians to the rest of the world. Gebretsadik recognized, “The Ethiopians right now, their tone changed a little bit when they see The Economist and The New York Times finally reporting on things that we have been saying since day one; [it] has been like oh, now you believe it, because a Western journalist came and told you, even though we told you it’s been happening to our families.” Support from the Ethiopian community besides sole Tigrayans took a while to gather, as there is still hesitation, which is why targeting the international community is prioritized. This method has reaped positive responses, as there is more awareness, yet more needs to be done.

“This is a humanity issue, not a political issue,” Gebretsadik deemed, as awareness is simply the first step to combating the injustices. The United States made its first statement about the Tigray conflict on January 27th, since the Joe Biden administration took office. They called for Eritrean troops to get out of Tigray as human rights abuses are found left to right including sexual violence and looting of homes, businesses, and hospitals. The European Union echoed the United States’ sentiment on February 8th, yet both the Ethiopian and Eritrean governments deny this to be the case. International intervention says otherwise.

The United States intervening with their thoughts is progress, but there are still plenty who are not aware of the state of Tigray. Gebretsadik made this clear when stating, “I don’t think people understand the severity of the issue. Imagine the entire Tigray region, an entire ethnic region, is on the verge of extinction. An entire ethnic group is going to go extinct, because [the government] is destroying everything and everyone.” Substantial work still needs to be done, from the Tigrayans away from home wondering if their family is still alive, to collective Ethiopians advocating for their fellow people, to the international community keying into humanity. Therein lies Tigray, a region of hope where the power of the people will prevail.