To Beat or Not To Beat 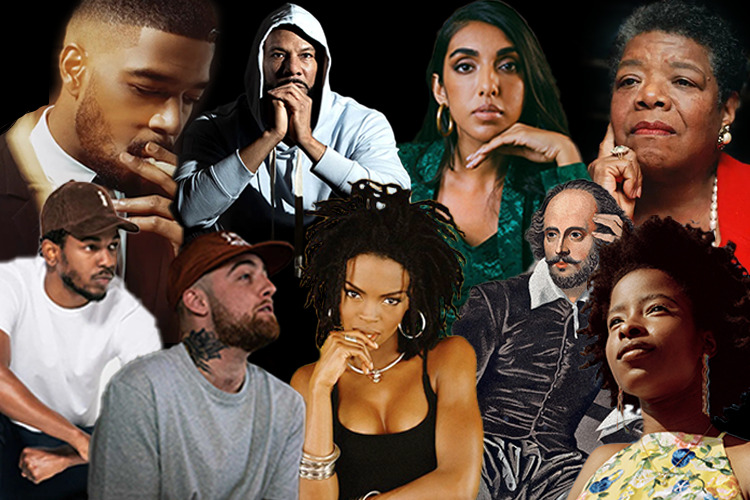 An astounding collage of generational rappers and poets. graphic by Shana Saint-Phard

Poets and rappers find themselves in an everlasting debate to see where they fit in with each other.

Over the past centuries and decades, poets and literary scholars have had an internal struggle in the form of words, because there is an ongoing war between rappers and published poets. The idea that keeps the issue afloat is that some poets believe that rap songs are not poetry because artists are believed to manipulate the words to form a metrical pattern. Within music, a metrical poem encompasses tempo, rhythm, and all the other rhythmic aspects of music. The poetic aspect is the stressed and unstressed syllables of words within a poem. These are just some of the characteristics that lyricists and poets do not see eye to eye on characteristics on which lyricists and poets disagree.

Rap was born out of a small house party in New York in the late 70’s as a way for gangsters and African Americans to create an escape as well as allowing listeners to gain an insight on their lives. One of the biggest songs that became a popular gateway into the golden age of rap was “Rapper’s Delight” by the Sugarhill Gang released in 1980. This catapulted the ‘Golden Age’ of rap stretching from the 1980’s to some might argue as early as 1993 and as late as 1997. Regardless, the expanse of almost two decades allowed for artists and groups such as N.W.A, Wu-Tang Clan, A Tribe Called Quest, Dr. Dre, Tupac Shakur, and The Notorious B.I.G.

The Compton and Los Angeles area rose in popularity as Ice Cube, Dr. Dre and Eazy-E alongside some other disc spinners m ade album after album telling stories about the hood and gangs. These hardcore artists had a narrative to tell and their story was a contributing factor to a sub-genre dubbed as ‘Gangsta-Rap.’ One of the songs that put this group on the map was the 1988 album, “Straight Outta Compton.” Anybody from Generation X can recall the opening line of the title track. The voice of Dr. Dre gave a fair warning, “You are now about to witness the strength of street knowledge.” Ice Cube opens the song describing his survival tactics in his neighborhood of Compton. This had been an anthem for Black youth in Southern California. They felt their voices were finally being heard. Later on the album also came a song titled, “F*** Tha Police.” For obvious reasons there had been an overwhelming push back on the song like the Los Angeles Police Department not allowing the group to perform the song on stage to this song getting projected during protests in riots in 1992 and even seeing a resurgence during the BLM protests in summer of 2020.

Flying over the country to the East Coast was the rival of many rappers, specifically The Notorious B.I.G. and 2Pac Shakur. Music enthusiasts were typically one of three fans, either East Coast Bad Boy Records, West Coast Death Row Records, or both. The sudden death of 2Pac was a huge grief felt all over the board and no doubt did fans turn to quickly blame the well-known Brooklyn rapper. This had been the first instance in which music lovers came to the defense of a rapper and their words. The argument to his death was his gang affiliations, yet I believe it was his love for music. He was a young Black man in America. He had his reasons to be angry at the world. His way out was through his words that just happened to have instruments and beats behind them. It had been very clear that no one was happy with the words he was rapping and putting out into the world. He died on the truth of his feelings, just like many other artists in the rap industry.

These coastal rappers have influenced a new wave of rappers that lots of the younger generations can relate to, artists such as Kendrick Lamar, Kid Cudi, and the late Mac Miller. Much like the Golden Age of rappers, Lamar discusses his growing up in Compton and feeling the pressures of having constant gang influences. In his albums like good kid A.A.d city and To Pimp A Butterfly Lamar stated, “The reasons and the problems and the solutions behind it. It’s a little bit deeper than just the music.” He goes on to defend those who are coming out of Compton trying to make a better life for themselves. Many fans felt they could turn to Mac Miller because he made his music a way for him to let people into his mind and what he was going through. It had been no secret that he had been battling his own mental illness. In an interview he did with Larry King back in 2018, Miller described his songs as being a “breath of fresh air” in comparison to some of his more sad and slower songs he had released on previous albums. Many of his fans believed that his music was one of the first that they considered to be poetry. Younger fans picked his lyrics as senior quotes or tattoos.

Fans also turned to Kid Cudi, who wanted to change his way of music and how it relates to rap in the way many knew it before. He explained how he wanted to bring authenticity back to his music and he hoped that people would be able to relate to the authenticity. This is a huge turn that many artists are taking, in the way that they want their music to reflect emotion, trying to reflect that way that poetry does for people.

In the literary canon, many people are finding it difficult to relate to deceased poets such as Ernest Hemingway and E.E. Cummings due to the fact that they were men who didn’t struggle in life with racism or sexism. Yet, artists such as Maya Angelou, Sylvia Plath and Rupi Kaur represent the women and women of color in literature. They have paved the way for female artists such as Queen Latifah, Lauryn Hill and Missy Elliot to rise up in the industry. Maya Angelou published books such as I Know Why the Caged Bird Sings, And Still I Rise and The Heart of Women. These incredible forms of poetry and literature gave women an opportunity to allow themselves to be heard. Rupi Kaur gives a voice to those whose tongues are held prisoner in their mouth, speaking about sensitive subjects such as rape, child marriage and abuse. These poets and many more have given the many artists of the world a platform to mix what they love most: music and the spoken word. Many people don’t realize that they are listening to poetry when they ride their bike or drive to work. Often, people hear poetry when you go to the store or stroll through a mall.

The debate between poetry and rap has been a long battle that has been fought on all sides, and I am not going to sit here and put a final end to the argument. All I have to offer is that over the years, poets have changed the way poetry looks by moving away from the Italian and English sonnets to more free verse style,whereas rap has changed from its intense lyric-heavy form to more spoken word. However, neither of these forms of words have had a solid and designated form for a very long time. People are living in a day and age where there is no right and wrong, and that will continue to allow people to grow and find themselves through these creative outlets.